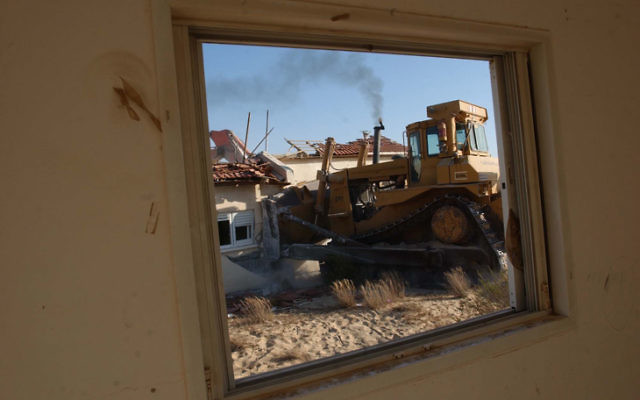 A backhoe demolishes a house in the settlement of Payat Sade during the 2005 disengagement from Gush Katif. (Flash90)

Similar to many other Israeli soldiers, September 12, 2005 was my final day in the Gaza Strip.

Aside from several brief forays to other military bases in Israel and the West Bank, Gaza had more or less been my home since March 2005.

The disengagement plan — a monumental undertaking — was the result of an impasse in the peace process with the Palestinians and then-Israeli prime minister Ariel Sharon’s susceptibility to “demographic” arguments. If Israel stays in Gaza, Arabs will soon outnumber Jews throughout Israel and the Palestinian territories, or so the theory went.

At the same time, it was getting progressively harder for pro-settlement activists to argue that the Jewish civilian presence in the Gaza Strip was protecting anyone. Simply put, the Palestinian terrorist groups Hamas and Islamic Jihad were lobbing makeshift rockets from Gaza over our heads and into Israel proper, much to the dismay and embarrassment of both the Israeli government and the Palestinian authority. Israeli communities in the Gaza strip nearly always doubled as military installations, leading to an absurd situation where Israeli soldiers outnumbered Israeli civilians in the coastal enclave for no clear strategic purpose. A larger and more visible Israeli presence meant more potential targets for terrorists. And much like in the security zone in Southern Lebanon years earlier, as time went on, the number of casualties among Israelis in Gaza rose steadily.

Throughout our time in Gaza, we rode in armored vehicles known as safaris, and we always made sure to have our magazines inserted squarely into the weapons we carried. Off base, I always made sure to wear my helmet, though I believe I was probably in the minority.

At the beginning, Gaza kind of felt like “camping with the boys.” We set up our makeshift “french beds” in a local gymnasium, community center, or abandoned settler’s house, comfortably positioned our sleeping bags on them, and then proceeded to play endless games of backgammon, as we killed time between meals. The important work generally happened at night anyway, under cover of darkness.

At the beginning, some of my nights were spent in pillboxes with my observation equipment including the infamous “pillbox 200” positioned along the isolated corridor leading to the Netzarim settlement. For those who aren’t familiar with the term, a “pillbox” is an imposing, heavily-fortified guardtower, usually located in areas considered dangerous. It was not uncommon for soldiers to protest “pillbox” duty. There isn’t a lot of room to move around inside one, making it a nightmare posting for people with claustrophobic tendencies. By some stroke of architectural genius that would impress even the best of interior designers, multiple floors were somehow inserted into the scarce space available within the structure, along with the trademark windy staircase. My companions on the inside generally consisted of a grizzled, veteran reservist, often a Russian-speaker who had served in Afghanistan back in the 1980s, another one or two draftees just itching to go home on leave, and never-ending cups of “turkish coffee” prepared as quickly and as silently as possible on a field stove. We did our best to maintain noise and light discipline, and always kept our ears peeled for the sound of nearby tunnel digging or explosions that seemed too close for comfort. A nearby two-way radio was always handy to maintain constant communication with HQ.

Later, I found myself posted as part of a field observation team for weeks upon end, along with Sergeant E., and Privates M., and O., doing shifts of four hours on, four hours off. Our temporary “home” was the second floor of an abandoned structure that had formerly been the beachfront hotel in the Neve Dekalim settlement. There was nothing particularly memorable about the run-down building, except that it afforded us a prime vantage point overlooking the coastal road. We dined on a seemingly bottomless supply of “disengagement” sandwiches and bottled water, and waited for action that rarely, if ever, came. During our shift change we would blast the song “Get Low” by Lil Jon and the East Side Boyz from O.’s speaker system just for the hell of it. Sergeant E. was the serious soldier in our squad, perhaps all too aware of the responsibility he had towards his subordinates, namely us. He also knew the risks involved as his father had been seriously wounded during the 1973 Arab-Israeli war. Contrarily, M. and O. were more laid-back, hailing from Beit Shean and Jerusalem respectively. M. was more willing to cut corners, while O. was more motivated. M. would later go on to become an entrepreneur and even win a Bank Leumi promotional loan for his mobile home business, while O., somehow or other, managed to find his way back into an elite fighting unit and later became a lawyer.

The “war of the ribbons” also known as blue (pro-disengagement) vs. orange (anti-disengagement) raged on in the world outside, and occasionally politics would become a subject of conversation among the troops, with those who opposed the disengagement often seeking to be transferred elsewhere. Disciplinary infractions for political reasons were not to be tolerated and a swift example was made out of a combat engineer who tried to foment dissent. Tent cities for large numbers of military personnel sprung up adjacent to Gaza to house the vast number of personnel required for the final phase of the mission – the forceful removal of the last of the Israeli civilian populace in Gaza.

By mid-August 2005, the last of the Israeli civilians in Gaza had been repatriated, and all of the territory formerly encompassing the settlements there was designated a closed military zone. It was demolition time. Decisions were made and action was taken — the bulldozers rolled in. Only the synagogues and some greenhouses would be left for the inevitable Palestinian takeover. Several weeks later our unit was camping out on a large water tower, not far from the soon to be de facto border between Israel and Gaza. A bunch of us showered using something resembling a makeshift garden hose, desperate for a refreshing respite from the unceasing summer heat, while our non-commissioned officer, N., tried half-heartedly to maintain discipline. And then, like a flash, it was all over. On September 12th, 2005, along with a significant part of the last remnants of the Israel Defense Forces’ military might in Gaza, we passed through the Kissufim crossing, never to return again…or so we thought.