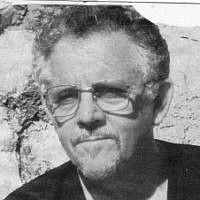 The Blogs
Dov Silverman
Apply for a Blog
Advertisement
Please note that the posts on The Blogs are contributed by third parties. The opinions, facts and any media content in them are presented solely by the authors, and neither The Times of Israel nor its partners assume any responsibility for them. Please contact us in case of abuse. In case of abuse,
Report this post.

Dear Edyth, Shabbat Shalom. I hope you and your family are well. I don’t know if I shared this with you. I do hope I have done you and the others justice in this story.  Love, Dov

PS. Janet hasn’t edited this one. Mistakes are all mine. Dov

Sergeant Geiger and three N.C.O.’s climbed down from the U.S. Army ammo truck on the rue de la Victoria in Paris.  They straightened their uniforms and caps, rubbing their spit shined shoes on the back of their pant’s legs.  The four approached the La Grande Rothschild Synagogue.  The great stone façade with thirty double windows each depicting the Tablets of the Ten Commandments.  Twelve windows centered above represented the Twelve Tribes of Israel.  Nine double windows standing for the Hebrew word Chai meaning life.  Then three great arched openings for the entrance representing the patriarchs, Abraham, Isaac and Jacob.  Bullet scars gouged the smooth facing stone of the 19th century structure.  The steps were crowded.  Mostly women in black, mourning the loss of loved ones during the German occupation.  Uniformed men from America, England, Belgium, France, Scotland and India mingled with underground fighters who helped liberate Paris, the City of Light.  It was Rosh Hashanah Eve and the first time the synagogue was being used since the German occupation.  As Sgt. Geiger led the three up the steps people stepped back and a whisper like wave preceded them into the synagogue.  They entered the foyer where the Gestapo planted bombs to liquidate the Parisian Jews on Yom Kippur several years earlier.  The damage was evident.  The Germans stripped the building of all valuables.  The walls were bare.  Doorknobs, hinges and lamp stands ripped from their places.  The four soldiers started up to the balcony with other women.  They were stopped by a group of men in civilian clothes wearing Jewish Resistance armbands.  Behind them a path cleared for a thin, worn, old man with wispy white beard and rheumy eyes.  Ladies he said in French, you will sit near the Torah with me.

In Yiddish, Sergeant Edyth Geiger asked, “Isn’t there a Mekitzah?” (separation between women and men)

My name is Rabbi Weill.  I have just returned from the concentration camp to my pulpit here in the Le Grand Synagogue.  For Nashyim Hayalot Women of Valor like you, there is no Mekhitzah this Rosh Hashanah.  The Jews of Paris wish to honor you ladies who volunteered to fight for our freedom.  May we all be written well in The Book of Life for the New Year.

Sergeant Edyth Geiger has been living in Safed, Israel for more than fifty years and recalls that blessing every Rosh Hashanah.

She will not be at services this Rosh Hashanah. Edyth passed on June 7th 2013. I was honored to be her friend. Dov Silverman

About the Author
Dov (Robert) Silverman is a ninth generation Brooklynite on his mother's side. After three years as a US Marine in the Korean War, he worked for 20 years as a Long Island Railroad conductor and an auctioneer, and he established Autar Microfilm Service. While working nights on the Railroad and studying full-time days, he earned his high school diploma and went on to graduate from Stony Brook University, Long Island, New York, cum laude, at the age of 39. Dov credits a spiritual meeting with God and a Tzaddik (righteous man), Jules Rubinstein, in the Brentwood (New York) Jewish Center, with setting him on the path of study, religious involvement and settlement in Israel. His and his family settled in Safed in 1972 where he taught English as a Second Language, was a high school principal, lecturer on teaching methods, supervisor of English teachers, and creative writing teacher at universities in Israel and the United States. He served four years as a Safed City Councilman. Dov Silverman is the author of the FALL OF THE SHOGUN, which is a five-book historical series that appeared on the London Times Best-Seller List and was also published in German, Polish and Hebrew. He won a 1988 Suntory Mystery Fiction Award in Japan for REVENGE OF THE GOOD SHEPHERDS; P (published in Japanese) was Writer-in-Residence at Christian Brothers University, Memphis, Tennessee, USA, 1995 school year; and was a teacher at Writer's Digest Magazine Correspondence School, 1994-1997. Dov also wrote THE KABBALIST (MYSTICISM), published in English 2007, Romanian 2009, Spanish 2012.
Comments