The Blogs
Jerry Klinger
Shaping the Future by Remembering the Past
Apply for a Blog
Advertisement
Please note that the posts on The Blogs are contributed by third parties. The opinions, facts and any media content in them are presented solely by the authors, and neither The Times of Israel nor its partners assume any responsibility for them. Please contact us in case of abuse. In case of abuse,
Report this post.
November 29, 2022, N. Netanya, Israel.
Conceived, funded, and facilitated by the Jewish American Society for Historic Preservation, in cooperation with the World Zionist Organization, the City of Netanya, and noted Jerusalem sculptor Sam Philipe, a major interpretive memorial to the U.N. 1947 Partition Resolution, was dedicated.
The Resolution commemorates the central birthing event for the modern State of Israel.
It is the visible Kesher between Galut and Israel then, today and for tomorrow.
https://fb.watch/h9Qh8ictw3/ 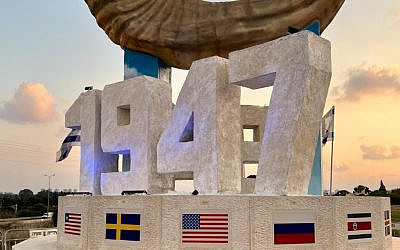 1947 U.N. Partition Resolution Memorial
About the Author
Jerry is the president and founder of the Jewish American Society for Historic Preservation, www.JASHP.org. He is the son of Survivors of Buchenwald and Bergen Belsen. He is a former Yeshivah student and served with the IDF in the Sinai. He is the author of over 100 articles in publications ranging from the Jerusalem Post to the Prairie Connection to the San Diego Jewish World. Jerry is frequently interviewed on T.V. and on Radio about the American Jewish experience. The Jewish American Society for Historic Preservation has completed projects in 40 US. States and in 6 countries. Over 7,000,000 people annually benefit from one of JASHP's efforts. JASHP has completed 18 projects in and for Israel. November 29, 2022, Netanya: JASHP completed the first-ever historical memorial to the central birthing event for the modern state of Israel - the U.N. Partition Resolution. - -Jewish Agency Facebook Spot. - https://www.facebook.com/yaakov.hagoel/videos/475227947933251/