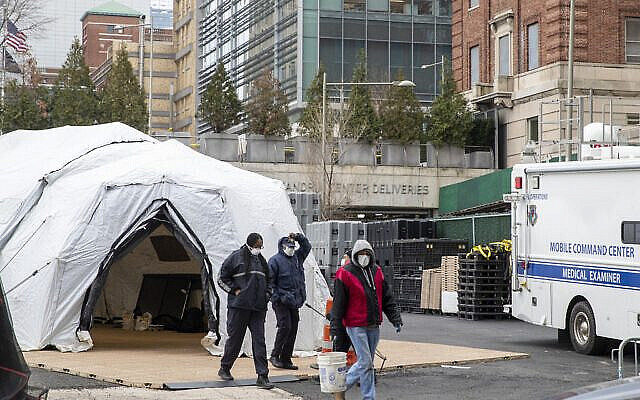 Medical Examiner personnel and construction workers are seen at the site of a makeshift morgue being built in New York, Wednesday, March 25, 2020. (AP Photo/Mary Altaffer)

As of today, the official numbers of people who died in New York City is 17,509. Experts estimate that the real number is about 5,200 more than that which leaves us at about 22,600 deaths in New York City alone. Of these numbers, it has been difficult to gauge how many of these deaths are Jewish. As a people committed to memory, to knowing our history, and to learning the lessons of the past it is essential that we learn how many community members we have lost, how have we done relative to our percentage of the general population, and what should we do so that history does not repeat itself. To get this information I spoke to my friend Rabbi Elchonon Zohn, President of the National Chevra Kadisha Association, and to Ms. Amy Koplow, executive director of New York’s Hebrew Free Burial Society. I am sharing what I have heard here. It is important to note that for various Jewish organizations, Long Island is included in New York City Jewish life which would include numbers from LI.

From our discussions it seems like the number is somewhere between two to three thousand Jews who died in New York City alone (not including Rockland County which was also hit very hard). Home to approximately 1.1 million, it is reasonable to conclude that the rate of death of the Jewish population is slightly higher than our percentage in the population. The Hebrew Free Burial Society of New York, which helps people who have no relatives or place to be buried, took in April and March 235 cases, compared to last year when they had 90 cases. With an average cost of $5,400 per burial it is essential the enormity of this spike cannot be overstated (donations to the HFBS can be made here.) During March and April, individual Jewish cemeteries were burying about 35 people a day.

Sadly, there is another very tragic side to this: currently speaking there are thousands of bodies in the holding of the New York medical examiner’s office that have not been identified yet. Many of these bodies will never be identified, nor will they have a family member come and claim them. There are also 1,500 bodies that are on wait to be cremated, a wait that may take up to six week’s due to the backlog in the New York system. It is reasonable to assume that many of these bodies are of our Jewish brothers and sisters.

So, what can we learn from all this?

First of all that we have lost 2000-3000 of our brothers and sisters over a period of two months. These are people that had entire lives, stories, and legacies. The vast majority of them did not have a proper funeral, Shiva, or memorial service. We owe them respect and remembrance. I think of my Yeshiva roommate’s grandfather Rabbi Yaakov Perlow, the Novominsker Rebbe who was the president of Agudath Israel of America and did not get the final respects he would have otherwise. I think of the so many Holocaust survivors, scholars, mothers, sisters, fathers, friends, aunts, uncles, neighbors, people who might have sat next to you in synagogue, and so many others who we lost without a chance to say goodbye.

In a beautiful digital candle lighting remembrance initiative based in Israel, 1460 pages have been put up in memory of Jewish COVID-19 victims. If you know someone who lost their life to COVID-19, please make sure you add their name and story.

Yet, almost more importantly, as we brace for the fall with no vaccine in place, it is essential we recognize our responsibility to our elderly and vulnerable. Our actions do have consequences. If we are not losing sleep over those members of our community right now, we are complicit in what may happen in the fall. Let us remember those who we lost, and make sure that we know no more loss again.

Special thanks to Ms. Amy Kuplow and Mr. Seth Haberman for their help with this article.