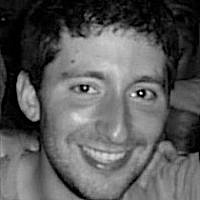 The Blogs
Leo Nayfeld
Apply for a Blog
Advertisement
Please note that the posts on The Blogs are contributed by third parties. The opinions, facts and any media content in them are presented solely by the authors, and neither The Times of Israel nor its partners assume any responsibility for them. Please contact us in case of abuse. In case of abuse,
Report this post.

When is enough actually enough? Is it when a soldier is shot in Hebron and another is stabbed to death in his sleep on a bus while international media outlets stay silent? Is it when a child is stabbed while playing in her front yard in Psagot and no policy changes are made by the government? Maybe it is when a Palestinian rock-throwing terrorist injures yet another baby, whose only crime was being in a car with a Star of David on the license plate, while more checkpoints and roadblocks are removed as gestures that demonstrate Israel’s commitment to peace? Surely, enough has to be enough when yet another institution decides to boycott the only democratic state in the Middle East while simultaneously continuing to engage with the world’s biggest human rights abusers.

For me, “enough” really became enough with the approval of the most recent prisoner release by Israel. An all-too-common charade took place once again: a ministerial committee approved the early release of 26 more murderers, and the High Court summarily rejected the appeal made by the families of those slain by these terrorists.

On Monday night, 26 criminals returned home to a hero’s welcome and will be rewarded by their government and their communities for the atrocities that they committed. While that is taking place, the families and friends of those slain have to once again relive the pain they felt.

How did we get to such a tragic reality when the mother of Koby Mandel, a 14-year-old boy that was barbarically beaten to death along with his friend, asks the government of Israel to not look for his killers because she does not want to deal with the pain when they will be set free? Simple: Netanyahu once succumbed to undeserving American pressure. Sadly, yet expectedly, he again received nothing in return.

As in 2009, Netanyahu made a major unilateral concession and disrupted the lives of over half a million Israelis in Judea and Samaria by freezing all construction in order to bring Abbas to the negotiating table and to appease President Obama. After nine months of silence from the Palestinians and one month of negotiating not conducted in good faith, it was evident that the unprecedented move was for naught. Not only was there no progress made in Israel’s pursuit of peace, but relations with the United States did not improve; Obama and Netanyahu continued to have public fallouts over Syria and Iran as well.

Now, Secretary Kerry has forced Netanyahu and Abbas to the negotiating table despite the lack of belief on all sides that peace at this time is possible. In his apparent pursuit of a Nobel Peace Prize, Kerry again twisted Netanyahu’s arm into unilateral concessions to bring an obstinate Abbas to talks. Since then, more Israelis have been killed in cold blood, the Palestinian negotiating team has quit, Netanyahu’s coalition continues to fall apart as he attempts to appease all sides, and we are no closer to peace.

So why do Israel’s leaders continue to follow the same failed formulas that inevitably lead to no results, and why do they not adjust course when the outcome of the path they are on is evident? As Albert Einstein said, “insanity is doing the same thing over and over and expecting different results.” When the lives of Israelis are at stake, and potentially the survival of the State of Israel is on the line, this insanity can be redefined as callousness and recklessness.

As concerned supporters of Israel, it is time that we stand up together and say “enough.” No more can Israel allow for leaders to act in a way that endangers the people of Israel, even if they feel that their backs are against the wall. No more should Israel tolerate being held to a higher standard: while Israel should certainly expect more of itself than others and should continue to strive to be a “light unto the nations,” Israel cannot tolerate condemnations by the actual bad actors of the world. Finally, no more can Israel allow for prisoners to be released in exchange for promises of dialogue. A request such as this would never be considered by any other nation, and it is reprehensible that Israel is asked to, and accepts, this policy

Now, more than ever, we must hold media outlets in the West accountable for only reporting Israel’s retaliations rather than stories that portray Israel as the victim so that the international community will not be oblivious to the reality that Israel faces. Now, more than ever, we must stand up against the hypocrisy of the international system that continues to pressure the leaders of Israel into making moves that harm the security of the people and of the state. Now, more than ever, the leaders of Israel must know that their people will no longer tolerate reckless appeasement at their expense. It is apparent that that will be the only way to enact change, and to really demonstrate that enough is enough.

Advertisement
About the Author
Leo is pursuing his Master of Arts in International Politics degree at American University, where he focuses on security. He has worked for a number of pro-Israel organizations, and currently resides in Washington, D.C.
Related Topics
Related Posts
Comments