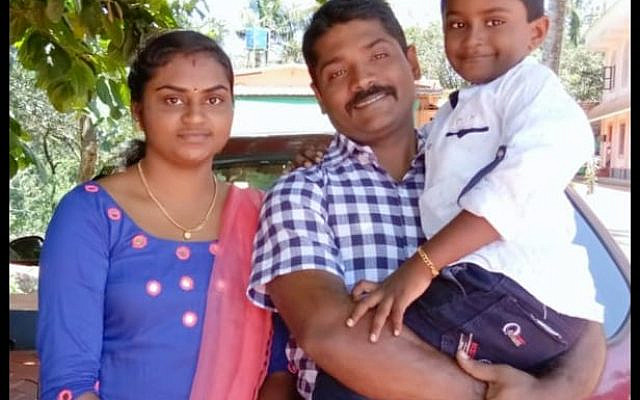 Soumya Santosh, and family. Santosh was killed by a Hamas-sent rocket, when she and the woman she took care of failed to make it to the shelter in time. (Twitter)

“It turns out that they were two Thai workers,” I heard someone say the other afternoon, when it became known that two casualties from rocket fire in the South were not Israelis. It was said in a reassuring tone, as if to minimize the incident. But how can we minimize this? It is worthwhile to stop for a moment to remember them. Weerawat Krunboorirak and Sikharin Sangamram were working in a packing house in a small moshav on the Gaza periphery.

We all know workers like them. They are part of the human landscape we see around us. Generally, they do vital agricultural work that Israelis do not want to do. They can be found in our fields day and night — planting, picking, and packing — yet we do not know them. We need to make sure that their employers are keeping them safe during this time.

Last week, Soumya Santhosh, 33 years old, was killed. She was a foreign worker from India who came to Israel in order to support her 10-year-old son who was living in India with his grandmother.  Soumya took devoted care of an 89-year-old Holocaust survivor in Ashkelon, and stayed with her even after Hamas began to attack. The missile that struck their apartment wounded the old woman and killed the caretaker.

Tzipi Malach, whose mother was taken care of by Soumya, said in an interview this week with Israeli Army Radio, “My heart aches for this amazing caregiver. She called my mother ‘Ima,’ so I felt a little like her sister. She removed worry from my heart and the heart of my brother with how she cared for our mother. She was all about helping and giving. I could not have asked for a more calming presence. She was a gift that was sent to us, and it is my deepest wish that Israel will now provide assistance to the family she left behind in India.”

Hamas probably would have preferred to kill Jews, but Weerawat, Sikharin, and Soumya, who came to us from Thailand and India, were still a part of us.

About the Author
Sivan Rahav Meir is a media personality and lecturer. A Jerusalem resident, she is the World Mizrachi’s scholar-in-residence. Her lectures on the weekly Torah portion are attended by hundreds and the live broadcast attracts thousands of listeners around the world. Sivan lectures in Israel and overseas about the media, Judaism, Zionism and new media. She was voted by Globes newspaper as most popular female media personality in Israel and by the Jerusalem Post as one of the 50 most influential Jews in the world.
Related Topics
Related Posts
Sivan Rahav Meir
Comments