The Blogs
Adam Slonim
Apply for a Blog
Please note that the posts on The Blogs are contributed by third parties. The opinions, facts and any media content in them are presented solely by the authors, and neither The Times of Israel nor its partners assume any responsibility for them. Please contact us in case of abuse. In case of abuse,
Report this post.

Why is the world looking the other way?

First, the issue is rarely raised, discussed or voted in the United Nations Security Council because Russia, the protector of the Gas-sers (the Assad regime), wields Veto power. South Sudan? Somalia? Ukraine? Myanmar? South China Sea? Yemen? Hardly a mention. Except for one issue: a monthly debate castigating Israel vis a vis the Palestinians. That one relentless issue is a permanent monthly agenda item.

Conclusion: the UNSC is held hostage by those who want to avoid, for their own reasons, the most difficult and troublesome issues, often featuring catastrophic humanitarian disasters. And the UNSC is obsessed with Israel.

Conclusion: Don’t wait for the United Nations to lead on this issue.

Second, the media Is barred entry to Syria so has trouble reporting on it. Without physical presence, reliance on Government propaganda becomes the staple. Occasional feed is sometimes sourced from individual mobile phones raised by courageous people living through the war. But even the net is tightly controlled by the Regime in Syria, if it works at all.

Conclusion: Don’t wait for the media to lead on this issue either.

Third, US President Obama’s approach to previous chemical weapons use by the Government of Syria was to blow hot rhetoric and do nothing. Obama’s famous “red lines” approach to Assad – audacious rhetoric followed by inaction – emboldened the regime to do continue and step up the unending and vicious slaughter of its own citizens.

Conclusion: Don’t wait for the Syrian Regime to hold itself back from unrestrained barbarism. There is no one to stop them.

Fourth, if it could get any worse, it does. The power vacuum created as a result of the breakdown of order arising from the seven year civil war has drawn in the worst of the worst barbarians – ISIS and al Qaeda. Syrian territory is up for grabs and every extremist sees an opportunity to build their next power base somewhere in what was once Syria. This multitude of extremist groups and factions has delivered a stalemate in any form of unified action aimed at ceasing the wanton destruction of civilians. Even ISIS has its protectors in this quagmire.

Conclusion: Don’t wait for those involved in the war to act in concert to minimise or finish it.

Fifth, the war is actively being stoked by outside powers that have an interest in ensuring instability for their own reasons. Top of the list is Iran, who has sent troops, materiel and proxies (Hizbullah) to maintain the fighting. As part of a grander expansionist design (to create a land bridge from Iran to the Mediterranean), Iran has shown no interest in alleviating the intense suffering of the Syrians.

Conclusion: Don’t expect the deeply entrenched Sunni-Shia subterranean hostility that underpins so much of the conflict in the Middle East to abate any time soon.

So where does that leave the Syrians? As human sacrifices with no-one able to stop this senseless slaughter.

“The moral is that the shape of a society must depend on the ethical nature of the individual and not on any political system however apparently logical or respectable.” 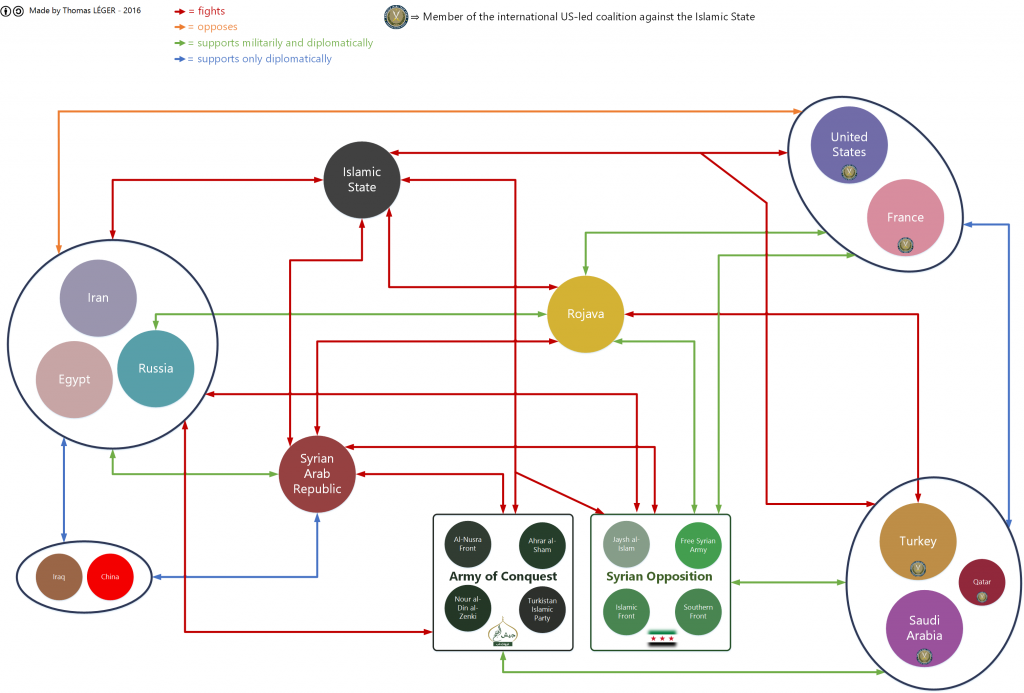