The Blogs
Shimon Apisdorf
Apply for a Blog
Advertisement
Please note that the posts on The Blogs are contributed by third parties. The opinions, facts and any media content in them are presented solely by the authors, and neither The Times of Israel nor its partners assume any responsibility for them. Please contact us in case of abuse. In case of abuse,
Report this post.

For the third time in just over a month, I find myself writing about Dafna Meir.

And if you asked me why, I could rattle off a dozen reasons, but none of them would get it right. 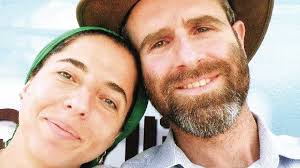 Deep down, in a place where I cry every time I go there, it’s not Dafna’s smile I see; it’s Natan’s. I don’t know Natan. I don’t know him in any context other than mourning, with his children, and for his wife. But there is something. Something I can’t quite put my finger on.

I arrived at Dafna’s shloshim (marking thirty days since her murder) about three people too late. I saw the last tickets being given out, and the doors to the Gerard Behar Centre being closed. But it was a night of uncanny beauty. The usually biting Jerusalem night air was warm, balmy and clear. The moon shone bright, and I silently joined a small group that grew to over a hundred sitting on the stone ground waiting to watch on a large screen. Dafna’s smile radiated from the screen as we waited.

It’s impossible to describe what took place that night if you weren’t there. One of the speakers, a woman that never met Dafna, spoke about their friendship, a friendship that was deep and transcendent. Her soul spoke of a friend she never met, and never would, of a friend that she would miss forever, with all her heart. And all of those that heard her words, somehow, knew what she meant. I guess that’s what the sages were echoing when they said, Words that emanate from the heart, penetrate the heart. Those weren’t words; they were emanations of the lev.

At some point, Natan shared something with us that can’t possibly be true, except that it’s Dafna, so it is.

A day or two before the shloshim, Natan received a phone call from the brother of Aryeh Frankental. Aryeh had been stabbed and shot to death by Arabs. The brother told Natan that a couple months after Aryeh was murdered, Dafna came to visit the family. She told them that they had every right in the world to be devastated, that it would be perfectly understandable if they just gave up and stayed in the abyss of mourning forever. And she also said to them that they had a choice to make. A choice between the eternal mourning that no one could deny them, and not. A choice to remain on the floor of shiva, or to rise. They could, she said, choose life. And according to Aryeh’s brother, those words made a deep impression on the family.

Aryeh Frankental was murdered twenty-two years ago, and Dafna was sixteen when she went to visit that family. Sixteen.

Something about Dafna isn’t quite…

Quite of this world?

Except that from everything we have heard, never was there a woman more rooted in this world. Dafna was a highly regarded, and widely sought out advisor, counselor, authority and friend for women that were dealing with the most delicate, intimate issues related to reproductive challenges. And apparently, with wisdom, great courage, and a wonderful sense of humor, she was able to help countless women. We were treated to a bit of Dafna’s humor that night, humor whose punch line was the birth of a child that may never have been born without her. Without her insight, intuition, love and encouragement.

Then there was this woman that read a yehi ratzon prayer. A yehi ratzon is said when one is about to do something significant but then stops for a moment to ask for Divine guidance. There are different yehi ratzons for different circumstances. This yehi ratzon is said before someone like a nurse gives medication to a patient. It’s a poetic, rich yehi ratzon that places the supplicator directly in front of the source of all the Holy Light in the universe, and humbly, selflessly, asks for nothing other than to be guided in every step, every detail, of giving a patient his or her medication. To hear this yehi ratzon is to hear the harp of King David in the middle of the night. At a certain point one is carried by the words that feel like they could go on l’olam va’ed—for, ever.

Dafna is the author of that yehi ratzon.

My guess is that the only one’s who will ever truly know are Natan, Renana, Akiva, Ahava, Noa, Yair and Yaniv.

There was music that night, but it wasn’t quite music. It was Evyatar Banai crying, praying, and lifting us through the harmonies of a voice, a guitar and a broken heart. I love live music. I never experienced anything like that.

And then there was Yariv Oppenheimer. Now you gotta’ get your mind around this. Natan and Dafna are “settlers.” The real deal. And Yariv was the director general of Peace Now for over a decade. One of the most articulate, passionate leftists that ever walked on occupied territory. He never knew Dafna, and never met Natan until a shiva visit. Yet there he was, speaking to us all. I would call it in love. In love with Natan, in love with Am Yisroel. Playing his part in a symphony of moments that carried us all— to? We weren’t sure where. A somewhere of beauty, of quiet, of tears, smiles, moonlight, hope and rebirth.

You know that Holy Light of Dafna’s yehi ratzon—that Endless Aiynsofness Light—it was there with us on that soft, warm, beautiful evening. It held our hands. It caressed us.

Now this is going to sound absurd.

They gave out refrigerator magnets that night. I kid you not, and these magnets are about ten inches long and three and a half inches wide. You see, on these over-sized magnets is an entire personal awareness system designed to help one achieve a sense of balance and proportion in life. A system that has the audacity to all but guarantee that if we use it, we will have the time to do everything we want in life. Everything. Graphically it’s designed to look like a ruler, and it’s called the chashuvometer; the what’s-really-important-to-you-o-meter. And yes, it was conceived and created by Dafna.

At some point Natan called his daughter Renana to his side on the stage. He gave her beautiful wavy red head of hair a loving kiss, wished her mazel tov on having just received her driver’s license, and handed her a colorful bouquet of flowers.

At some point Natan thanked his children for the unspoken… unspoken. That they saw in one another’s eyes.

And he thanked them for choosing life.

And we thank you Natan.

For giving us a glimpse of what choice means.

And in the words of fifteen-year-old Akiva, we thank you dear God.

And for Natan. A friend I hope to get to know one day.

I walked down Hanetziv Street, through the narrow, near silent, timeless lanes of Mazkeret Moshe, to Agripas Street. Deep slow breaths were my companions. I crossed into the shuk, now alive with music, and life, and continued with those breaths to the train stop, where I waited.

It really was a beautiful evening. A beautiful Jerusalem evening.

About the Author
Shimon Apisdorf has authored ten books that have sold over a quarter million copies and have won two Benjamin Franklin awards. His family moved to Israel in the summer of 2012. His new website is currently under construction.
Comments