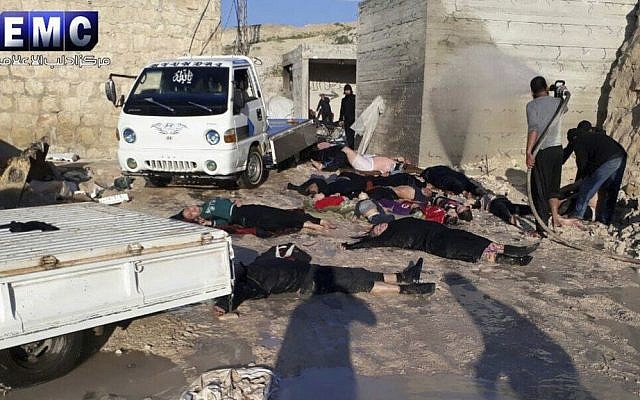 This photo provided Tuesday, April 4, 2017 by the Syrian anti-government activist group Edlib Media Center, which has been authenticated based on its contents and other AP reporting, shows victims of a suspected chemical attack, in the town of Khan Sheikhoun, northern Idlib province, Syria. (Edlib Media Center, via AP)

I’m just slightly annoyed at the hosannas of joy and paeans of praise that emanated almost unanimously from Israeli politicians and pundits, as from their US-mainstream counterparts, at Trump’s “presidential,” “decisive” launch of a missile strike at Syria. Righteous anger at the gassing of Syrian children is entirely justified, and gratitude for satisfying the sense that “something must be done” is understandable. But what really irks me is the almost-as-ubiquitous parroting (especially in Israel) of Trump’s accusation that Bashar Assad’s use of chemical weapons against his own citizens was directly and exclusively Barack Obama’s fault.

Obama-bashing was the standard Israeli line long before Trump suddenly saw the light about Assad while watching the horrendous TV footage from Idlib. It has become nearly axiomatic that Obama’s “weakness” or “fecklessness” on Syria, and the Middle East in general, was the root of all evil there. Lately, it was his supposed failure to make good on the “red line” that he drew in 2012 when Syria crossed it in 2013. Assad, and his patron Vladimir Putin (on whom Trump laid no blame at all), merely followed up on this failure three and a half years later. This is hogwash.

In my experience both as a journalist and as an historian, when a notion becomes next to axiomatic – that is, no evidence is called for when it’s stated – the time has come to question it. In the book I co-authored with Isabella Ginor, The Soviet-Israeli War, 1967-1973 (forthcoming from Hurst/Oxford University Press this summer), we re-examined a series of such concepts about the USSR’s role in the War of Attrition and the Yom Kippur War. More often than not, these concepts proved unfounded – but were almost unassailably ensconced in collective memory and historiographical literature by skillful spin at the time. Half a century after the USSR’s massive military intervention in the Egyptian-Israeli conflict, as we watched Putin re-enact the Soviet strategy and modus operandi in Syria, we ended the book on the note that “the sense of déjà vu is overpowering.” And as then, misleading and tendentious narratives are being inculcated and canonized by endless repetition.

Obama did make some missteps. Here’s what he said about Syria on August 20, 2012:

I have, at this point, not ordered military engagement in the situation. But … we have been very clear to the Assad regime…that’s a red line for us and that there would be enormous consequences if we start seeing … the use of chemical weapons. That would change my calculations significantly.

If drawing a “red line” wasn’t an error to begin with, creating the impression that the consequence of crossing it would necessarily be “military engagement” certainly was.

If that was what he meant, Obama might have been wiser to add “I would then ask Congress for authorization to launch major military operations,” which is what he did a year later when Assad called his bluff – and Congress declined. The American public and body politic was still traumatized by George W. Bush’s gratuitous and disastrous invasion of Iraq, which (despite Trump’s outrageous fingering of Obama as ‘founder of ISIS”) was what created the conditions for the organization’s rise. Even in 2013, with Republicans in control only of the House, support for the military option was not forthcoming – and one can only imagine the outcry if Obama had gone ahead without it. At the time Trump himself, after launching his political career on the birther lie, inveighed loudly against attacking Syria. Even amid the present, widespread acclaim of Trump’s own attack, he is facing calls to get congressional approval for any further action.

But in 2013, Obama’s very threat, even unfulfilled, sufficed to motivate Putin to coerce Assad into a deal to remove and destroy his chemical weapons – a deal in partnership with Russia that Trump, the self-proclaimed master deal-maker and Putin-admirer, would have flaunted as his crowning feat. The charge is now being leveled that the Idlib bombing proves neither Putin nor Assad kept his word. That may be true, though we still don’t know whether the nerve gas used was a residue of the old stock (most if not all of which was undisputedly destroyed), or newly manufactured or imported. What we do know is that until the end of Obama’s term, for over three years that included Assad’s resurgence after the Russian intervention, there was no additional proven use of chemical weapons. Not bad mileage by Trumpian standards; let’s see whether he matches it by preventing another gassing until 2020. And Obama achieved it without escalating the limited American military role in Syria.

The US role is limited, unlike Russia’s, because unlike Moscow, Washington — and Jerusalem, too – has no dog in this fight, no clear-cut favorite to win the bloody struggle for what remains of Syria. Putin does have a definite protege: Assad, or whoever of his clique succeeds him, is the guarantor of Russia’s longtime naval bases and new air bases in Syria, its only ones in the Mediterranean and Middle East until a few months ago, when it began to reestablish a small military presence in Egypt. The putative secular, democratic opposition in Syria that Obama – laudably – tried to support has proven illusory as a force capable of overcoming Assad, and the American hardware it was given fell into very wrong hands. Should America bolster the Iran-Assad-Hezbollah axis by defeating ISIS, or support the Gulf-backed Sunni forces who may be overtaken by the likes of al-Qaeda and ISIS? Putin is spared this Hobson’s choice. The US president has to finesse it as Obama did, and finessing is not Trump’s strong suit.

The fact is that Assad overtly contravened Obama’s deal and resorted to chemical weapons against civilians only two months into the Trump administration. Assad did so after Trump consistently clarified, before and after his election, that he would not intervene in this or other foreign wars, that he considered Putin an ally in combating ISIS, and that Assad could — for all Trump cared — stay in power.

One of the Soviet techniques that we see recurring in Putin’s Russia is to constantly push the envelope, testing how far they can defy Western interests and positions without triggering an all-out global clash. If any action of a US president led Putin to countenance, if not abet, Assad’s latest atrocity, it was Trump’s talk and behavior before his latest, abrupt turnaround. Whether the strike on Syria was indeed “presidential” – that is, whether it manifested a calculated, consistent and responsible strategy — depends on the follow-up, which remains to be seen. On this as in all else, profound analyses of a purported “Trump Doctrine” have had little but whims and tweets to rest upon. But for him to blame Obama is even more egregious than his usual chutzpah.

P.S.: If Trump was really in thrall to the Russians because they have kompromat on him, or due to financial dependence – rather than out of voluntary admiration of Putin’s machismo; and if his newfound aggressiveness persists to Moscow’s chagrin, payback time may be near. Or is there something to the conspiracy theory whereby Putin actually courted Trump’s bravado, at Assad’s minimal expense, in order to deflect attention from the worsening suspicion of Trump’s collaboration with Moscow in areas more vital than Syria? Keep your eyes on Putin’s mouthpieces RT and Sputnik!

Gideon Remez is an associate fellow of the Truman Institute, Hebrew University.