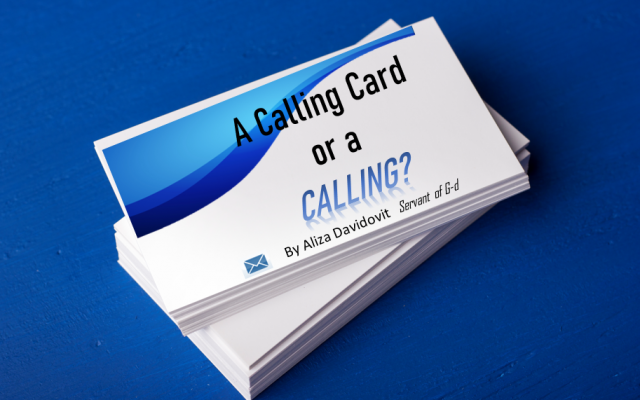 It’s a strange feeling when we leave a job and our business cards become instantly obsolete as we are no longer who they say we are. I know when I had to shed my cards that said ABC News and Fox News there was a pained voice inside that said “ouch.” We feel important by affiliation and often feel like nothings when we don’t have impressive credentials to back us up, great jobs, a good business, a rich husband, rich parents, designer clothes, Ivy League schools, etc., We stand there insecure, vulnerable, reassessing our own worth. Who am I without all that? And you are right, if you feel like a nothing without all that then you are nothing by your own math. Fancy titles hypnotize us and we come to believe our own lies and illusions. Even resumes often read like fairy tales. The Talmud calls this world alma d’shikra, the world of lies. Everything is a misrepresentation. No, there is nothing wrong with putting our best foot forward, as long as it is our foot. But being a phony or a fraud is defeating the purpose of our own creation.

As a journalist, at the onset of my career, meeting the famous was exciting, I was impressed with myself–a superstar by affiliation, but not for long. When you rub shoulders with such people, what really rubs off? Perhaps you learn a little, but for the most part it is a fake world bamboozled and simultaneously paranoid with itself. Some of the people I interviewed and met have been indicted and have done pretty bad things, Am I now guilty by association? At what expense are we hanging on to our titles, prestige or make-believe visions of self? A whole life goes by without truth. I’m so lucky that I have such strong faith and belief in G-d because when I finally realized I was living in a vapid world of make-believe there was something that was real and unchanging for me to grasp on to, G-d and His Torah, my miner’s  torch in a dark world.

I have met some decent people but I can truly say that my most proud affiliation is with G-d. Working for Him alone is when I really became a somebody. And I’m proud of my latest title. No, it is not editor-in-chief, producer, pundit or Queen of Questions, it is servant of G-d. In this job what is real about me has lasted, the stardust is gone with the wand.

We have only to look to Moses as the ideal role model. He never even applied for the greatest job in history. He was assigned it nonetheless, for his curriculum vitae had life’s greatest and rarest trait, humility. The greatest prophet in history, who spoke face-to-face with G-d, did not have business cards that read Prophet-in-Chief or CEO of the Torah. Moses was called a servant of G-d. His humility made him the worthy and blessed vessel to receive the greatest gift ever given to humanity, G-d’s word, the Torah. King David’s humility too made him the greatest king in history: “And I am a worm and not a man.” (Psalms 22:17)

Today, our egos and pride are so massive that we leave no room to receive the gifts that await us. We are so busy trying to beat each other with the puffed up resumes of our lives, so busy showing off what we are and hiding what we are not that we repel and prevent all we can truly become. G-d’s royal seal is the word EMET, truth. Thus neither He nor His blessings will reside where there is none. The reason a pig has become the symbol as the “most” unkosher animal is because it is a phony and a hypocrite. On the outside it has split hooves, a feature which renders an animal kosher. “Look, look, I’m kosher.” But on the inside, it does not chew its cud, the second vital requisite to deem it kosher. From all the great role models in the Torah, why would we want to have anything in common with a chazir?

In this week’s Torah reading once again, Moses laments the fact that G-d won’t let him into the Promised Land. He beseeches G-d 515 times, to no avail. A midrash teaches that Moses even begged G-d to let him enter the Land even as a beast of the field, which grazes on the grass and drinks water and sees the world that way—“Let my soul be as one of those!” (Midrash via Chabad). Titles didn’t matter to Moses. When you really are something genuinely, you don’t need the fancy appellation. To serve G-d, to reach the prized destination following the liberation from Egypt, he was ready for the most dramatic of demotions, because he knew what we egoists can’t get through our swollen heads, nothing matters but G-d. He is the only audience we have, ein od milvado, there is nothing but Him. When one acknowledges that fact deeply, pretense begins to fall away and our way will be blessed. The rabbis teach that one of the reasons Joseph’s bones were allowed to be buried in Israel after being exhumed from Egypt and that Moses was not allowed to enter in any form was that Joseph acknowledged the land from whence he came when his master’s wife said, “See, they have brought us a Hebrew man . . . ,” he did not deny it; on the contrary, he said “I was abducted from the land of the Hebrews. Moses did not do the same when the daughters of Jethro said, “An Egyptian man rescued us from the shepherds.” He heard this and was silent. Therefore G-d said, “You shall not cross this Jordan.” (Midrash via Chabad).

Know who you are. Know from where you came. You are a Jew. That is your role. Stop playing parts that don’t belong to you. They don’t become you. G-d fills every seat. Only His eyes are on you. They look through every crack and peephole. Be you. Be true. You will like yourself better and everyone else will too.