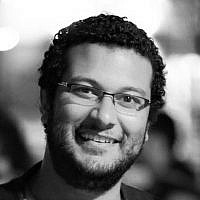 The Blogs
Haisam Hassanein
Apply for a Blog
Please note that the posts on The Blogs are contributed by third parties. The opinions, facts and any media content in them are presented solely by the authors, and neither The Times of Israel nor its partners assume any responsibility for them. Please contact us in case of abuse. In case of abuse,
Report this post.

Live in Israel, and you’ll witness the great contradictions of life for the Jewish majority and the Arab minority. Jews and Arabs deal with one another on a daily basis. In a very practical way, they understand that coexistence is the only solution to ongoing life and prosperity. But they are also completely isolated from one another, living apart, and knowing nothing about the other, despite their proximity. In the extreme, some Arabs and Jews have regular dealings with each other, even know each other very well, but still hate one another.

This divide is perhaps most striking during the celebration of Independence Day by the Jewish majority and the commemoration of the Nakba (“catastrophe” in Arabic) by the Arab minority.

On the morning of May 12th this year, I woke up to a strange situation, presented with two different Facebook invitations. The first one was from a Jewish friend asking me to attend an Israeli Independence Day event, while the second invitation from an Arab friend urged me to commemorate the Nakba. Unlike a regular invitation to a party or event, these invitations reflected Israel’s diversity and internal schisms.

As an Egyptian American living in Tel Aviv, I had the great advantage of forming close friendships with both Jewish-Israelis and Arab-Israelis. For the most part I have been successful in navigating the divisions between Israel’s Jewish and Arab communities. Yet, on Israel’s Independence Day, the divide between Arabs and Jews takes on a fundamental schism over memorialization and commemoration.

Israelis’ celebrations of their Memorial and Independence Days was one of the most ironic things that I encountered in Israel.

Every year, in late April or early May, on the 4th of the Hebrew month of lyar, the commemorations of Memorial Day start. The day, in the Israeli collective memory as described by a friend, “is an emotional day and pretty much the saddest for the entire nation, as the Israelis commemorate the loss of tens of thousands of soldiers who have died to defend the right of Israel to exist as a nation.”

One of the events that I attended this year was at Rabin Square in the center of Tel Aviv, where a few thousand people were there to listen to patriotic and religious songs and watch recorded videos of fellow Israelis who talked of their loved ones’ sacrifices and heroism in helping the state gain its independence and continue to exist. I learned that a typical day for an Israeli family is to go to cemeteries around siren time (11 a.m.), since many know someone who was killed while serving. Others either spend time with their families or watch documentaries about fallen soldiers.

When walking the streets during these hours, one cannot help but notice the unusual emptiness of the streets normally crowded with people.

Walking around in Tel Aviv’s Rabin Square, Habima Square and Dizengoff Center, one cannot help but notice the festive mood of the people. Some greeted me, saying, “Chag samaech. It’s Israel’s birthday,” when I met them at the market or in the street. I found it particularly unusual to hear and witness this mood, given the fact that no one outside of Israel celebrates this day.

One of the most interesting parties I attended was the Lone Solider party on the beach of the Tel Aviv port, where I socialize, and heard firsthand impressions of people’s happiness. The most interesting thing for me was understanding the concept of a “lone solider,” recruits who come from different parts of the world to serve in the Israel Defense Forces. The oleh friend of mine who had invited me to attend the party with him explained, “I had planned to move to Israel not for army service on its own merits, but to live here for life, to contribute to society, to be a part of the collective, and personally find happiness and meaning in life. And military service is one of the tools for achieving these goals, and contributing to my people (Israelis of all backgrounds, religions, and ethnicities, AND the Jewish nation) and my country. Now I am done with army service and feel much more integrated than had I not performed the service. No regrets.”

While the event is mainly to remember the lost Jewish souls, there are other segments of Israeli society who take part in this day as well, such as the Druze community, centered in the Carmel region and the Galilee. During this year’s commemorations, the story of a Brigadier General by the name of Munir Amar, who died in a light plane crash in Northern Israel, was covered in the Israeli media as part of their efforts to commemorate Druze victims who fell defending the state. While Druze speak Arabic and identify with Arabic culture, they do not associate with the cause of Arab nationalism. I remember, when I was heading to the Nakba event in the university, I happened to bump into one of my Druze friends and I naively asked him if he wanted to go to the Nakba commemoration with me. It took me a couple of seconds to realize, but my suggestion had made him feel very uncomfortable.

Another segment of Israeli society that participates in the memorial commemorations is the Bedouin. Though exempted from serving in the IDF, they can volunteer, and do. One of the major stories in the Israeli media this year was the story of a Bedouin peace activist whose father died during the war, before he was born. The son appeared on Channel One and shared his family’s experience of losing his father as a soldier before his mother gave birth to him, and what had happened since. The commemoration event for his father and other tribe members was held in southern Nazareth.

While this day is considered by many Israelis to be a real family day, where they frequent national parks, hiking trails, and nature spots for barbecues and picnics, another segment of Israeli society — one that constitutes 20 percent of the population — views the day differently.

The reality of the situation hit me when I encountered Arab-Israelis, who were interpreting the events of Independence Day much differently than their Jewish counterparts. Even though I, as an Egyptian, grew up sharing the same gloomy perspective of this day as Arab-Israelis, I had never witnessed this contradiction on the ground as they do, and it had never impacted on my life personally in any way.

Before the Nakba Day, one of the major events in which thousands of Arab citizens of Israel participate is called the “March of Return.” The main objective is to call for two different kind of return. First, the return of externally-displaced Palestinians who left their homes in 1948 and ended up as refugees in different parts of the world, and second, the return of internally-displaced Arab-Israelis, who moved from their villages to different parts within the country.

This year, I had the opportunity to attend the Nakba Day event at Tel Aviv University, where I witnessed Arab and some Jewish students organizing it. Everybody wore black shirts. The event began with a minute of silence to remember those who died in the Nakba. Then different students embarked on talking about different family experiences with the Nakba in three languages: Arabic, English and Hebrew.

I learned from some students that it is ironic for Arabs who live in Israel and have Israeli citizenship to meet people who unknowingly congratulate them on Independence Day. For them, it is a day of sorrow and shame because it commemorates the big split that happened between them and their people in 1948.

As much as Arab-Israelis do not view Independence Day positively, another segment of the Israeli population, this time from among the Jewish majority, shares that same sentiment. Some ultra-Orthodox Jews do not celebrate these events. They deny the existence of the state and view its existence as a sin. The belief rests on the idea that the messiah won’t come until everyone is Orthodox, and there are only Jews.

It was interesting to see (non-ultra-Orthodox) Jewish students participating in the Nakba Day. One of the students explained this by saying “It’s more about showing solidarity and making it to the crowd for support.” Regarding her views as a Jewish Israeli on celebrating Independence Day, she responded, “In the past few years, I’ve either avoided any event, or, if my family made it into a special gathering and I felt like I should be there, then I went. Otherwise, I did not attend any specific party for Independence Day.”

One of the Arab students expressed his feelings of Israel’s celebrations as follows: “We as people used to live on our land, but now our people are displaced and dispersed. Now we are a minority in a state that we have no ties or loyalty to. We were the remnant enemy, who became now a minority, and their independence is to resemble our loss and the degradation of our people. Now, we are living with the enemy, and we have to act as if nothing ever happened.”

About the Author
Haisam Hassanein is an Egyptian-American who pursued his masters degree in Middle Eastern studies at Tel Aviv University.
Related Topics
Related Posts
Comments