As our country prepares to say our final farewell to President George H.W. Bush, I gaze at the wall in my office where there hangs a framed signed photo of President Bush along with students from Gesher Jewish Day School of Northern Virginia, the school I was privileged to serve as headmaster from 1988-1995.   It was December 12, 1990 when our students and faculty were invited to participate at the White House for a ceremony commemorating the holiday of Chanukah which coincidentally falls this week.  When I received the invitation to go to the White House, I contacted Marc Glickman, a local Maryland artist who is known for his talent to create wooden Dreidels (http://www.dreidelmaker.com/). His hand-carved and inlaid wood Chanukah dreidels have been exhibited at the Smithsonian Institution and at Jewish museums throughout the country.  Each side of the dreidel in the Diaspora bears a letter of the Hebrew alphabet: נ (Nun), ג (Gimel), ה (Hei), ש (Shin), which together form the acronym for Nes Gadol Hayah Sham – “a great miracle happened there”). These letters were originally a mnemonic for the rules of a gambling game played with a dreidel: Nun stands for the Yiddish word nisht (“nothing”), Hei stands for halb (“half”), Gimel for gants (“all”), and Shin for shtel ayn (“put in”).

I asked Marc if he could create two dreidels as gifts for the President, a regular one with the four Hebrew letters and a special one with a Gimel on each of the four sides. As Ben Cooper and Pamela Kasenetz, two of our students explained the rules of the game to the President and Vice-President, when it came to the President’s turn to play the game, I gave him the one with all Gimels — so that no matter which side the dreidel landed, the President would always win! He certainly won over our hearts when after our students performed several Chanukah songs, the President came over to chat with the kids — he was gracious, down to earth and his humility was inspiring. 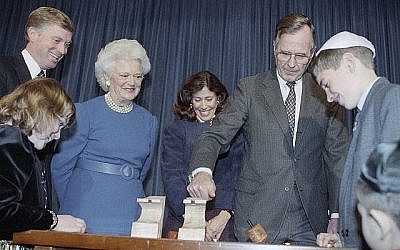 During his prepared remarks he quoted from the letter that George Washington sent in 1790 to the members of the oldest synagogue in America, The Touro Synagogue in Newport, Rhode Island.  President Bush said:

“…In that letter President Washington said that ‘The United States Government would give to bigotry no sanction, to persecution no assistance.  Everyone shall sit in safety under his own vine and fig tree and there shall be none to make him afraid.’ These words embody the ideal of the American freedom of worship, an ideal that we reaffirm today and that we pass on to the generations that follow us…”

We were all touched greatly when at the end of the president’s remarks he called up one of our students, Lydia Shestopalova, who had recently immigrated with her family to the United States from the Former Soviet Union.  Lydia is just one example of how President Bush was influential in assisting more than 150,000 Jews from the FSU to be able to emigrate and live and worship freely, a right that was denied to them for so many years.

Over these last days, tributes to “Bush 41” have been shared by people from all over the world who were impacted not just by his leadership, but by his kind, gentle and dignified persona.  Many will debate and scrutinize his presidential decisions and policies during his term of office, as all presidents are always judged, even after they leave the White House.  But I will never forget his kindness and humanity on that December morning in 1990.  As Jews celebrate Chanukah this week, also known as the Festival of Lights, I pray that all of our government leaders will remember President Bush’s words from his inauguration, affirming that he would “keep America moving forward,—for a better America, for an endless enduring dream and a thousand points of light.”  May his memory endure as a blessing to his family and to a grateful nation.