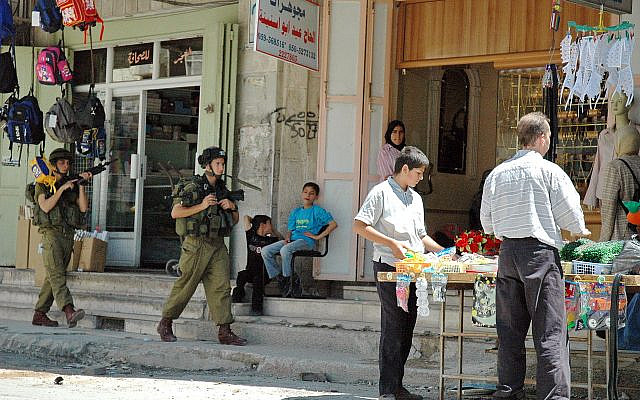 Israeli soldiers at a market in the West Bank city of Hebron in August 2004 (credit: Justin McIntosh / Wikimedia Commons).

From the perspective of Palestinians, the conflict has been humiliating from the start. Not only have most of them been displaced from the towns and villages where they lived before 1947/48, but many ended up as a sub-class of pariahs in an Arab country, typically living in camps and having limited and often demeaning prospects. They have been promised for decades by their leaders that somehow, they will be given their land back if not their homes, but none of it has materialized. Those who are refugees have no hope of becoming fully part of any country unless they are lucky enough to emigrate to the West. Those who live in Gaza are trapped between an oppressive and brutal regime and a punishing Israeli blockade. Those who live in the West Bank are second-class non-citizens next to Israeli settlers who are full participants in the state of Israel. Even the most moderate Palestinians see no path ahead towards a dignified existence for themselves and their children within a state where they would be full citizens.

From the perspective of Israelis, the conflict has been from the start about fighting back against attempts to deny their right to self-determination and even their right to live. The have made many pragmatic choices over the decades, accepting the UN partition plan that they did not like, living within the Green Line while enduring endless attacks, and agreeing to two-state solutions that the Palestinians later rejected. They even evacuated their troops from Gaza after forcing their own settlers to leave. In the meantime, they have been at war since 1947, defeating three major attempts to destroy them, fighting several smaller wars, and enduring tens of thousands of terrorist attacks. For all the efforts that they made towards peace, they see no results other than ever-increasing Palestinian extremism. There is no Israeli who is not scared mentally or physically by decades of fighting for their existence and sending their children to wars that they never wanted. Even the most moderate Israelis do not see Palestinian terrorism ending anytime soon.

It is easy for an outsider to point out that the stand-off benefits neither side because the distrust and violence from one side only increases distrust and violence from the other side, allowing the cycle to continue, but neither side sees compromise as beneficial. They both see any compromise as a sign of weakness and therefore as an invitation for more violence against them.

Either side could in theory break the cycle.

The Palestinians could disown extremist groups who use violence, they could recognize that Israel is a Jewish state and will remain so, and they could seek a negotiated solution that meets Israel’s security needs while also offering the Palestinians a dignified future. While after decades of distrust, this would not be an easy path, it would lead to peace if the Palestinians were able to maintain that stance and to keep extremists under control. Israelis are eager to have peace, and if they start believing that Palestinians want that too, a reasonable solution will emerge.

The Israelis, on the other hand, could start taking steps towards leaving enough contiguous land in the West Bank for the Palestinians to be able to build a viable state. By the estimation of the Jewish Virtual Library, if a Palestinian state is created today, it would require moving “90-140,000 Jews from their homes”, and that number keeps growing. Such steps by Israel would not immediately lead to peace, but they would give the Palestinians the option of a path towards self-determination, which they currently do not have. The amount of time that this would take to lead to peace would depend on the Palestinians, but the benefits to Israel would be immediate because its claims that it wants peace and doesn’t oppose Palestinian self-determination would suddenly become far more credible.

But neither side is likely to take such steps. Due to the collective trauma suffered by each side, the extremists will likely continue pushing the conflict further and further away from peace and a reasonable compromise.

We as outsiders (I include in this category Jews and Arabs who live outside of Israel/Palestine) cannot resolve this conflict. The most positive action that we can take is to not make the conflict worse by demonizing one side and glorifying the other, which is sadly something that we often do. I accept responsibility for having done so myself. In a way, we too are traumatized by the conflict, and we take passionate positions, but we are only causing harm to those who have no choice but to live through the conflict. We must recognize that while there are individuals and groups on both sides who deserve criticism, there are plenty of victims and there is plenty of trauma on both sides. Each side is collectively a victim and deserves our support. Each of us must also recognize that the side that happens to be our preferred side will not have peace until the other one does as well.

We can also help by encouraging each side to talk, and more importantly, to listen to the other. Israeli and Palestinian leaders should be seeking peace relentlessly, and they should engage often in conversations with each other. We must demand that of them. It is the only way for them to create some trust between them and to start seeing each other as fellow humans. Conversations do happen already between Israelis and Palestinians but only among limited groups who have no power to make significant policy changes. Conversations must be significantly expanded at every level. This is faint hope, but it is the only hope.