Back in November, we witnessed the Danino-Edelstein contretemps.

Police Commissioner Yohanan Danino had made statements in Sederot opposing visits to the Temple Mount and had said: “Anyone who wants to change the status-quo on the Temple Mount – it (should be) forbidden for him to go up there,”  And Knesset Speaker Yuli Edelstein retorted that Danino is “not suited” to give advice over issues relating to the Temple Mount and parliamentary immunity. That led to Danino responding that “Knesset Speaker Yuli Edelstein does not understand at all what the role of the commissioner [entails]…’I think we have some Knesset members who set an agenda to change the status quo on the Temple Mount.  Not only do I not retract the things I said, but I add the announcement that I will not allow these Knesset members to visit the Temple Mount.”

Danino is back at it.

Despite closing down funding sources for the aggressive Muslim hecklers and provocateurs, arresting Waqf officials, and other proper and correct actions, he has now been quoted, declaring

“To me, the Temple Mount is no less of an existential threat to Israel than any bomb…The MKs who visit the Mount to pray or visit are trying to change the status quo…and they are inciting the entire Muslim world just to get some votes. The results will be a tragedy for Israel…When elected officials say ‘I am ascending the Temple Mount in order to change the status quo,’ they become a security threat to the State of Israel…”

There are two things wrong with all this.  First of all, where are all our liberal democrats who are always protecting our system for interference from officials?  Danino can make recommendations to his minister but to wage a public debate over an issue which is political?  There is a law on the books permitting free access and the right of worship b yt the political echelons ban that.  If he has a problem with MKs, let him go to court.  His administrative powers are not equal to that of a lawmaker.

Palestinian member of the Israeli Knesset Ahmad Tibi on Saturday joint hundreds of Palestinians marching toward the Al-Aqsa Mosque in the Old City of Jerusalem to mark the Prophet Muhammad’s birthday, Israeli media reported. Tibi waved the Palestinian flag and called for an end to the Israeli occupation… 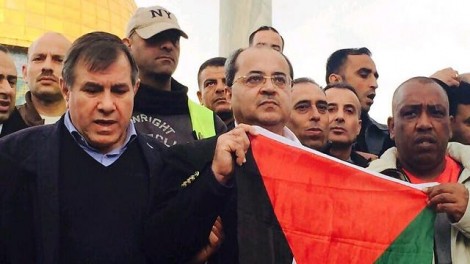 Is MK Tibi not a MK?  He is not provocative?

Or is the fact that he is an Arab Muslim in his favor?

Or that he, too, like Danno, wishes to preserve a status quo that harms archaeological finds of Jewish heritage in addition to the restrictions on human and religious rights Danino is promoting?

Why is Danino being allowed this freedom?