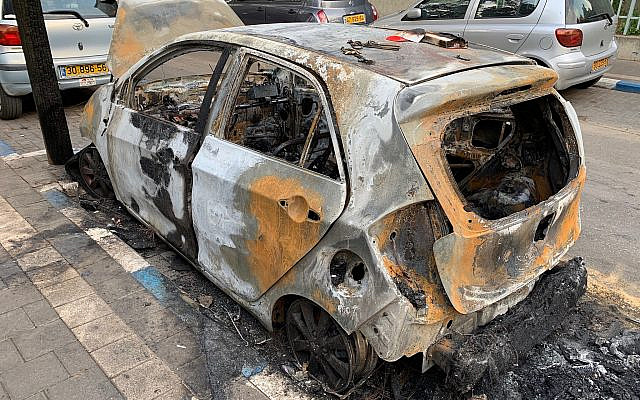 The other morning I’m biking on a narrow street alongside Tel Aviv’s Carmel Market when I have to stop at a roadblock. Police barriers are up to keep people from heading south, and there are a lot of security guards standing around.

It’s a quiet scene. I don’t spot any uniformed soldiers, just men in bright-yellow vests. No one carries an assault rifle, and there is no high-alert tension in the air to signal that something heavy is going down. People by the barrier are waiting calmly for permission to proceed.

Thinking, okay, no big deal, maybe it’s just a political rally, I ask a security guard if I can pass through. “Wait five minutes, sir,” he says politely. I’m in a hurry, so I don’t ask for an explanation.

Carmel Market is not barricaded, so I am free to pass through it if I choose, which is what I do. I’m on my way to a Gaga dance class, you see, and I don’t want to be late. The typically crowded shuk is still waking up — most vendors are setting up their stalls, and there is hardly a shopper in sight — so cutting through is a pleasure.

As for the Gaga class, it is more dramatic than the police blockade, with people tensing their every muscle to its limit, shaking their bodies from head to foot, sweeping and clawing the air with their arms, bouncing and kicking, some even groaning or moaning.  And that’s how my day in Tel Aviv begins.

Cut to the afternoon, and I’m walking alongside Meir Park, less than two blocks from my apartment, when I am stopped by the sight of a burned-out car. This is not something one usually sees in my mostly tidy neighborhood. It is more dramatic than Gaga class, and I am not in a hurry, so I stop to record the sight on my phone.

“Do you know what happened here?” a passerby asks. I tell him no.

“Kids?” We’re talking about a shell of a car that looks as if it has been fire-bombed. “I doubt it.”

“Is it an art installation?” another passerby asks.  I tell him that I don’t think so, while admitting that I am filming the car because its charred, gutted remains create a captivating image. “Fire can be beautiful and horrible,” I say, and he agrees.

Another man also stops to take pictures and points out the path of the car’s wheels, how it appears to have been either hit from behind, or, maybe steered into the telephone poll by a drunk driver.

“This morning there was a big police barricade in the  shuk,” I tell him. “Maybe that was a related attack.”

“No,” he replies. “The thing in the shuk was a film shoot for Netflix.”

We know that the burnt car is the real deal, even if we have no idea what has brought about its destruction. And so my afternoon in Tel Aviv goes.

Cut to the evening, and I’m listening to a lecture about Israel’s elections given to a group of new citizens of the country. The speaker takes pains to explain that there is a difference between dysfunctional politics and dysfunctional democracy. Israel’s democracy is solid, he almost reassures us, but its politics are dysfunctional, just like politics in a lot of other democracies.

He points out that 71% of Israelis voted in the September election, which is higher than voter turnouts in thriving democracies such as Germany, Canada, and the United States.  As for the deadlocked knesset that has led to a caretaker government, the money that will be pissed away in order to hold an unprecedented third election within a year, the possibility of a fourth election in another 90 days after that, he quotes Frank Zappa, Martin Luther King, and Abraham Lincoln.

All of them believed that the best antidote to dysfunctional politics was action.  So, if you want to improve the world around you, he advises, get involved. Don’t just vote, do something.

The lecture may not be as captivating as a police barricade for Netflix, a Gaga class, or a burnt-out car. Still, it seems a fitting way to end another day and night in Tel Aviv.

About the Author
Born in New Jersey, Marc Kornblatt worked as an actor, playwright, journalist, and children's book author in New York City, before moving to Wisconsin where he taught elementary school. He began filming music videos with his students, which led to the founding of his indie production company Refuge Films. He has produced several Israel-based documentaries and the award-winning web series, ROCK REGGA. He and his wife made Aliyah in 2019 and now live in Tel Aviv. He recently completed OLEH HADASH, a web series documenting his experience as a new citizen of Israel.
Related Topics
Related Posts
Comments