The Blogs
Aliza Lipkin
Apply for a Blog
Please note that the posts on The Blogs are contributed by third parties. The opinions, facts and any media content in them are presented solely by the authors, and neither The Times of Israel nor its partners assume any responsibility for them. Please contact us in case of abuse. In case of abuse,
Report this post.

Israel gets more than its fair share of news coverage but unfortunately, it fails to capture the reality of life here.

I’ve heard people express all sorts of misconceptions and it would take a lot more than a blog post to debunk them all. The only way to understand what life is like in Israel is to spend some time here. Since that is not feasible for most people I was ecstatic when my friend Yona Morgenstern made a video called,  A day in the life of an Israeli.

Yona is a dance teacher and has been living in Israel for the last 25 years. She owned a dance school for eight years and when the school closed down she decided to make a video that would accurately depict what life is like in Beit Shemesh, where she lives. Beit Shemesh was getting too much negative media coverage and she wanted to show the happy side of the city. In doing so she discovered a creative avenue to express her love for Israel through film production and choreography. In this latest video, Yona wants to show that Israel is not an apartheid country and that there is much eagerness to reach out and have peace. She wants to “counteract the dark evil with tones of light and truth of our coexistence”. Yona wants “people to feel free to come to Israel and not be afraid”, she says the video is also intended to give a voice to those who want to speak out against terrorism without fear. She chose the song “World on Fire” for the video, which was written and performed by Yehuda Solomon of the Moshav band because it conveys an image of a resolute Israel which is able to maintain a level of normalcy and cohesiveness despite the trials and tribulations throughout the World. 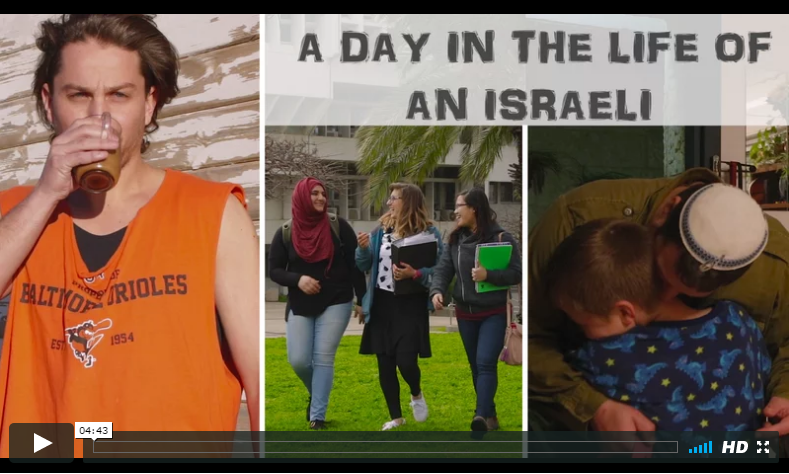 The video features a few other Israelis that I admire.

Ari Fuld is someone who devotes so much of his to time to run Standing Together, an organization which caters to the different needs of Israeli soldiers, sending drinks, food, clothes, undergarments and more to soldiers in the field. He appears in the video in his IDF uniform getting refreshments at a special rest stop for soldiers much like the service that his organization provides.

Sarah Zoabi is a self-proclaimed “Arab, Muslim, Israeli, proud Zionist”  who has put her life at risk for her views. Her son, who she raised with these ideals, has been forced into hiding for being vocal about his loyalties and beliefs. Sarah is a woman of strength who believes in the right of the Jewish people to have their own country and calls Israel a paradise for Arabs. She supports and speaks in favor of Israel every chance she gets. In the video, she appears in a hijab at a makeup store, on the bus sitting next to Yona and returning a forgotten jacket to a soldier. These are common scenes of everyday life here in Israel.

Ariella Zeitlan is a world renowned violinist and singer-songwriter. She made Aliyah when she was 17 quickly becoming a musical representative for Israel. She can be heard and seen playing the violin in the video.

The video starts off with two of the essential ingredients on which this country runs – our soldiers getting up before the crack of dawn to protect our country and the brewing of strong black coffee. It shows coexistence on the streets of Jerusalem and highlights some of our trademark foods like shakshuka and falafel. It shows Israelis studying, dancing, shopping, traveling and going about their daily business. The video ends off with a couple of Israelis walking over to a guy in a bar who appears lonely. It turns out he is a Russian lone soldier and they make a toast, a display of caring that highlights our ability to unify which is the secret ingredient that will keep our people strong.

If you enjoyed the video you can vote for it at the “Inspired by Israel” video contest.

Feel free to help our soldiers for Pesach with Ari Fuld and Standing Together.

About the Author
Aliza Lipkin fufilled her biggest dream by making Aliya in 2003 from the US. She resides happily in a wonderful community in Maaleh Adumim with her family. She is a firm lover and believer in her country, her people and her G-d. Her mission is to try and live a moral and ethical life while spreading insights based on Torah values to bring people closer together and help build a stronger nation.
Comments