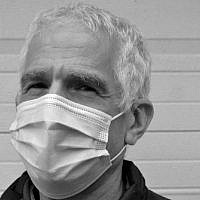 The Blogs
Ken Bresler
Apply for a Blog
Please note that the posts on The Blogs are contributed by third parties. The opinions, facts and any media content in them are presented solely by the authors, and neither The Times of Israel nor its partners assume any responsibility for them. Please contact us in case of abuse. In case of abuse,
Report this post. 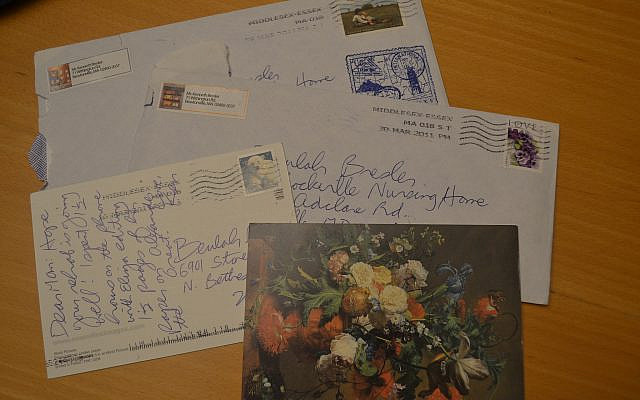 A sample of the author's mail to his mother.

I gave the same gift of words twice, 10 years apart, to members of my family two generations apart.

The gift began two years before my mother died, although of course no one knew then that it was the last two years of her life. She had limited telephone stamina; she simply couldn’t talk on the phone for long. So I began mailing her something every day. It was often a letter. I learned from my sister that my mother kept the letters on the table next to her reclining chair in the den and reread them.

Dear Mom: …Eliza was so excited about Purim. She said, “Jews have two Halloweens,” which is one way of looking at it.

On one Friday afternoon during those two years, I came down from my office to the mailbox in front of my building. A postal truck was parked in front and a postal worker was collecting mail from the mailbox – including a letter that I had already mailed to my mom. He offered to take the mail that I held. I said something like, “No, I’m going to put it in the mailbox so that it goes out tomorrow.” That is, it would go out on Shabbat. I wanted mail arriving for my mother five or six days a week. I wanted her to get something from me just about every time she got the mail.

Dear Mom: The big news here is braces. Marly is getting her braces off next week after five years. And Eliza got braces last week.

Email her? No way. My mom was in her mid-80s. She had never been on email and was not about to learn. When I communicated in writing with her, it was by letters.

What would always interest my mother? Hearing about my two daughters, whom she called her girls. “How are my girls?” she would ask on the phone – because we did talk on the phone, although our conversations were not long.

Dear Mom:….Marly asked for a little help on her English homework tonight, and I had to look up grammatical terms, like “compound-complex sentence.”…Marly insisted that I tuck her in tonight, which she does periodically.

Frankly, I often looked for things to write about. Food was a good topic.

I made Marly her typical pasta and grated parmesan. For Eliza’s lunch, I drew a smiley face with a marker on her clementine. Well, not exactly a smiley face: one eye was winking (I drew eyelashes on) and the tongue was sticking out.

To save time for me and to make the letters easier for my mother to read and reread, I composed them on the computer and printed them out. And that’s where they remained for a decade, on the computer (although not on the same one that I had written them on).

Let’s see; what’s up with your girls? Eliza dropped her cell phone in the toilet, so there went that piece of electronic equipment and all its stored information. She got a new phone about a half-week later.

In addition to food, school, of course, was a big topic. So was sports, including basketball.

No pass seemed safe from [Eliza]. No opponent could dribble near her safely, even if she wasn’t guarding that player.

I told Marly that all the fighting that she and Eliza did in the dining room had some good effect.

In 2020, the pandemic struck, many of us started looking for pandemic projects, and I knew that my computer held, in effect, a diary of my daughters’ lives for two years, from early 2009 to early 2011. (Well, it was a partial diary, a diary of the time that they were in my home and not their mother’s.) For Marly, it was a diary from when she was 14 to 16; for Eliza, from when she was 10 to 12.

To turn the stash of letters to my mom into a joint diary for my daughters, I stripped out the details of my life: the traffic jams during my commute; the deadlines met at work; the classes taught as an adjunct professor; the book I was writing; and the laundry and the shopping and the errands. Some of these things were significant; some were mundane things that I had used to fill up the letters.

I reported to my mom about Kesher, a local Jewish afterschool program:

[Eliza] attended her Rosh Hodesh group connected with Kesher last night. They usually have pizza but she was excited to have had falafel. She was telling me about a film they had seen in Kesher about the Acquisition in Spain. I asked her: “You mean the Inquisition?” Yes, she said. She was fascinated to learn about conversos.

I said: So seeing as we don’t have to be Jews in secret, can you practice your bat mitzvah?

Creating the diary left me wistful. In 2009, 2010, and 2011, I did not know when my mother would die. But in 2020, I knew. As I edited my letters, I was saddened to know that, month by month, her life was getting closer to ending. It was a poignant project for another reason. My life as a divorced dad had been hectic, pressured, burdened, and sleep-deprived. And a decade later, I, in effect, lived through it again as I read and edited my letters.

Hi, Mom!….Eliza’s bat mitzvah will, God willing, be six months from yesterday. And God willing, you’ll be able to participate some way. I received three designs from the bat mitzvah invitation designer.

The last letter that I wrote and mailed to her was on April 2, 2011. She was in a nursing home by then.

Eliza is growing so fast, her face, not so much her height, although she is getting taller. Sometimes I don’t recognize her in a crowd.

She didn’t get the letter. The next day, alerted that my mother, 87, was dying, I flew from Boston to the Washington, D.C. area  to see her. She had died by the time that the airport shuttle van delivered me to the nursing home in Maryland. My last few letters must have arrived that day, the day of her funeral, and during her shivah.

In 2020, I finished editing and printing the diary, and punching holes for a three-ring binder. Weeks later, I presented it when my girls surfaced on Thanksgiving 2020, which we celebrated on Wednesday. We ate at a table on the patio, bundled in winter wear, aided by a space heater. After a three-pie dessert, we retired to the driveway around a portable fire pit and I gave them the diary.

My older daughter, now 26, read through the diary, although not all of it. It’s 114 pages, both single and double-spaced; I kept the line spacing of the original letters.

She smiled and laughed and read several things out loud to her boyfriend and to her sister, now 22, who kicked with her sneakers at the burning logs in the firepit. They left after three hours, cold and smoky, and left the diary for me to keep. At some point, I presume, they will each want a copy, and I will create a second one. 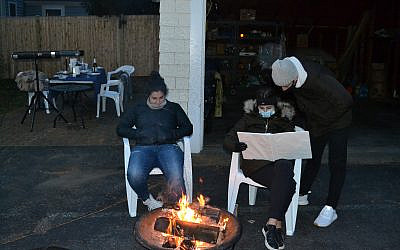 Thanksgiving 2020. L to R: Eliza Bresler, Marly Bresler, and Ross Goldberg read and hear the diary that the author created.

I gave them, I now realize, not only this gift of words, a record of part of their lives, that I first gave to their Bubbe. I gave them the gift of love, to be reminded, a decade after she died (it will be 10 years on April 3, 2021), that their grandmother loved them so much that she was interested to know what they ate for breakfast, and that their father loved his mother and daughters so much that he reported it.

About the Author
Ken Bresler is a writer and occasional poet in Newton, Mass.
Related Topics
Related Posts
Comments