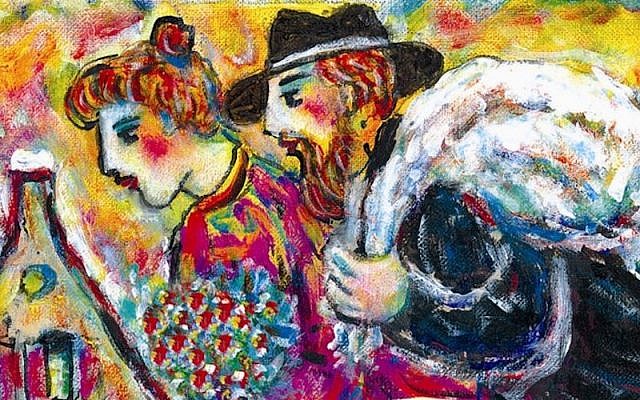 Detail from the cover of 'Bubbie and Zadie Come to My House' by Daniel Halevi Bloom.

More than 30 years ago, I published a children’s picture book titled “Bubbie and Zadie Come to My House” and not only did it sell well nationwide in hardback and paperback, the resulting publicity surrounding the Chanukah-themed book and how it came to be led to newspaper articles in more than 100 papers in the U.S. and Canada. The New York Times wrote about it, the Associated Press wrote about it and the San Francisco Chronicle wrote about it.

Time flies. I am much older now, as are the readers back then who read the book with their parents and grandparents looking over their shoulders. Now those young readers are adults and perhaps passing on their copies of the book to their own children every Chanukah after Chanukah. Some say it’s a Jewish holiday classic now, and I have a savvy publisher in New York to thank for taking a chance on my book and issuing a second edition in 2006. But most of all, I thank the children who read the story when it first came out in 1985, And lo and behold, as if a new kind of miracle has happened, the book is still in print and available in libraries and Jewish museum gift shops nationwide.

There’s more to come, perhaps. There is talk now of a Broadway musical based on the Bubbie and Zadie characters in the book, and several producers have approached me. Fingers crossed, or as they say in dreamland, from this page to God’s ear.

In addition, a possible animated cartoon version of the book, again starring Bubbie and Zadie as the central characters, is being considered by an animation studio in Hollywood, with a storyboard being designed by a Chinese-American woman in New York.

Whatever will be, will be. The words of that song have always stayed with me, since I first heard my mother singing the song at the piano when I was a kid.

Meanwhile, as Chanukah comes and goes, and it will come and go for another 2000 years at least, news reached me overseas that the Kadosh cafe in Israel recently celebrated 50 years in business by offering 50 different versions of ”sufganiyot,” according to an AFP report by Michael Blum. Kadosh is famous for its Chanukah donuts, Blum reported.

Among its most original creations have been doughnuts made with ”creme de cassis” liqueur, salted caramel, pistachio and pastry cream. Who knew?

According to the AFP news wire report that ran in my local paper in Taiwan, Kadosh sells between 2,000 and 3,000 doughnuts per day during the Hanukkah season.

And in addition to Kadosh and its delightful Chanukah concoctions, Jerusalem’s Franck Delights offers 10 different doughnuts, with the bakery highlighting its French roots.

Whatever Chanukah treat floats your boat, and whatever Chanukah memories you cherish from your own childhood in your own home country around the world — Morocco, France, Canada, Mexico, Argentina, Israel — I hope that Bubbie and Zadie — the bubbies and zadies of us all — will live on forever in our hearts. I know I will never forget mine.