These past three days I have been attending the Global Forum for Combating Antisemitism in Jerusalem.

It was impressive and ultimately important. Although I caught two spelling errors in the titles on the opening evening’s movie (its, not it’s and hatred, not hatered), those were minor things. What did, however, cause me to be critical of some other elements of the program was imbalance in the composition of the panels.

The opening one which included attacks on the government’s handling of the situation in Hungary and Austria was two-thirds anti Netanyahu in make-up. Another, entitled “Antisemitism in the Far Left – Intersectionality as a Cover for Hate Speech in Current Progressive Activism”, while chaired by Jonathan Arkush, President, Board of Deputies of British Jews had as panelists David Bernstein, a Bill Clintonite, Dave Rich, Associate at the Pears Institute for the Study of Antisemitism, an organization that is quite problematic politically in England and Nadine Epstein, Editor-in-Chief, Moment Magazine, the periodical founded by Leonard Fein, a radical leftist. Only one, Sohrab Ahmari, Senior writer, Commentary Magazine, an Iranian Catholic was, oddly enough, the staunchest defending Zionism, Israel and facing down forcefully anti-semitism.

On the third day I was bestirred at a session entitled “The Denial of Jewish History in International Organizations: The case of Jerusalem in the United Nations and UNESCO” chaired by Dan Mariaschin, CEO and Executive Vice President, Bnai Brith. The keynoter was Irina Bokova, former UNESCO Secretary General and she was fine. Of the respondents, Peta Jones Pellach, Director of Educational Activities, The Elijah Interfaith Institute, Ivo Goldstein, former Croatian Ambassador to UNESCO, Shimon Samuels, Director for International Relations, Simon Wiesenthal Centre, it was David Roet, Former Deputy Permanent Representative of Israel to the United Nations who, for me, highlighted a background problem I discerned: biased planning.

Samuels had discussed how the Palestinians were year-by-year turning UNESCO into a forum for anti-semitism by the theft of national cultural locations, stripping them of their Jewishness. One was the Western Wall which was exclusively called Al-Buraq with “western” simply being a direction rather than referring to the Temple.

At question time, and Josh Wander caught my question and the reply, I noted that Yasser Arafat right after Oslo had always referred to the Wall as Al-Buraq and he did so based on the findings of the 1930 International Commission which decided

To the Moslems belong the sole ownership of, and the sole proprietary right to, the Western Wall, seeing that it forms an integral part of the Haram-esh-Sherif area, which is a Waqf property.

To the Moslems there also belongs the ownership of the Pavement in front of the Wall and of the adjacent so-called Moghrabi (Moroccan) Quarter opposite the Wall, inasmuch as the last-mentioned property was made Waqf under Moslem Sharia Law, it being dedicated to charitable purposes.

I have blogged about and see here from 2007.

My question was: why did the Foreign Ministry fail in seeing already 20 years ago where this was heading with Samuels now bemoaning the situation. 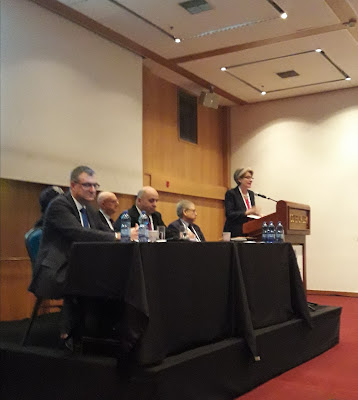 Roet, at the far left, first replies by making fun of the suggestion that was made to refer to the West Bank as Judea and Samaria.

Odd. That was the whole point of Samuels complaint: the Arabs are stealing our national legacy, our geography and our place names.  Perhaps if 20 years ago or even 50 years ago the genuine terminology had been used, the world today would not be voting for UNESCO resolutions that erase our past.  Roet displayed not only institutional failure but haughtiness.

He then continues in hubris and suggests it is I who am doing harm as I should not be targeting him or the MFA but rather those who do Israel and Jews harm.

But I had just proven then his policy was the harmful one.

He ignored the Foreign Ministry failure and sought to blame me.

All this reminds me of something the prophet Tzefaniah composed in Chapter 3 of his book:

Woe to her [Jerusalem] that is filthy and polluted…Her prophets are wanton and treacherous persons; her priests have profaned that which is holy, they have done violence to the law…For then will I [God] turn to the peoples a pure language, that they may all call upon the name of the LORD, to serve Him with one consent…In that day thou shall not be ashamed for all thy doings, wherein thou hast transgressed against Me; for then I will take away out of the midst of thee thy proudly exulting ones, and thou shalt no more be haughty in My holy mountain…The remnant of Israel shall not do iniquity, nor speak lies, neither shall a deceitful tongue be found in their mouth…