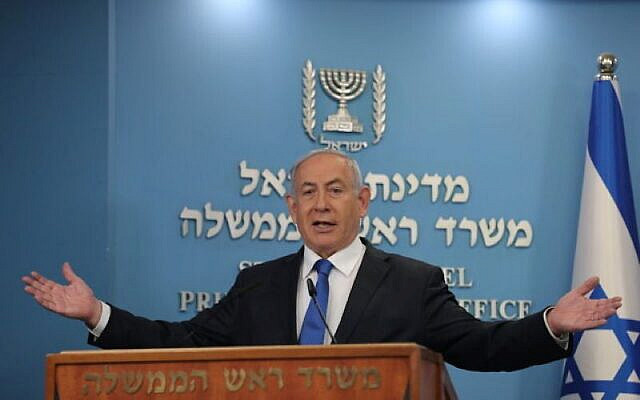 Prime Minister Netanyahu announcing the agreement with the UAE on August 13, 2020 (Yontatan Sindel/Flash 90)

Based on the enthusiasm with which the normalization agreement between Israel and the United Arab Emirates (UAE) has been greeted, one would think that an existential threat to the State of Israel had been lifted. Instead, we are witnessing a business deal brokered between one party that has technological knowhow to sell and another that has expansive funds to purchase it… and the Palestinians be damned.

Despite the statement by a senior UAE Foreign Ministry official that his country remains committed to the Arab Peace Initiative (API), the agreement basically pulls the rug out from under it. The UAE has given Israel the most significant benefit promised in the API – normalization – without Israel meeting any of the conditions, which include withdrawal from the occupied territories captured in 1967 and the establishment of a sovereign, independent Palestinian state with East Jerusalem as its capital.  And so, one of the pillars of the internationally accepted paradigms for a resolution of the Israel-Palestine conflict has crumbled.

While it is rare for me to agree with anything that Prime Minister Netanyahu says, there were quite a few truths in his announcement on the UAE agreement.  First, he has indeed accomplished one of his major goals: shattering the principle of land for peace and replacing it with “peace for peace,” a slogan that has a nice ring to it but actually means that the link between peace with the Arab world and an end to the occupation of the Palestinian territories has been severed. Second, he admitted that plans to officially annex large parts of the West Bank have been put on hold but remain a key objective and will be implemented at some point in the future. Those who are dismissing this as a bluff meant to appease the settlers must have missed President Trump’s statement that annexation is off the table “now,” but he can’t talk about “the future.”

Those on the left who are rejoicing over having stopped annexation are suffering from a severe case of myopia. Annexation began in 1967 and is continuing every day with each new road, each new housing unit, each new park, and every inch of infrastructure laid by Israel on occupied Palestinian lands. In fact, in the past two weeks alone, Israel has been leveling land in preparation for expanding the Nofei Nehemia outpost, and the High Planning Council advanced a plan for new bypass roads that would link settlements on the outskirts of Jerusalem to the city. De jure annexation may have been suspended, but de facto annexation will continue unhampered. As Hanan Ashrawi succinctly tweeted: “Israel got rewarded for not declaring openly what it’s been doing to Palestine illegally & persistently since the beginning of the occupation.”

Another concern is that the agreement breathed new life into the Trump administration’s wretched “Peace to Prosperity” plan, which appeared to have been put into cold storage as the ravages of the Corona pandemic and failing polls turned Donald Trump’s attention to the fading chances of winning a second term in office.  Mohammed bin Zayed strengthened the operating assumption of Trump’s so-called peace plan – that peace can be bought – and threw his Palestinian brothers, who are refusing to barter their fundamental rights for a higher standard of living, under the bus.

Many are praising the agreement for having saved the two-state solution, without recognizing that it is yet another nail in the coffin of a viable Palestinian state. The line that can be drawn from the Gulf representatives’ appearance at the unveiling of the Trump plan to the UAE’s willingness to take its ties with Israel out of the closet shows that the agreement must be viewed within the context of Trump’s “vision” for the Middle East.  According to that “vision,” Israel gets to keep 30% of the West Bank and the Palestinians get left with a state in name only that is made up of fragmented enclaves and is ruled by a government with limited sovereignty. In other words, the UAE has handed Israel a free pass to perpetuate the occupation.

Israelis entrepreneurs are thrilled about the opportunities the agreement has opened, and the majority of the public are busy dusting off their passports in anticipation of taking in the breathtaking view from the observation deck of the Burj Khalifa. For the few who refuse to come to terms with Israel’s oppression of the Palestinian people, however, there is no cause for celebration.