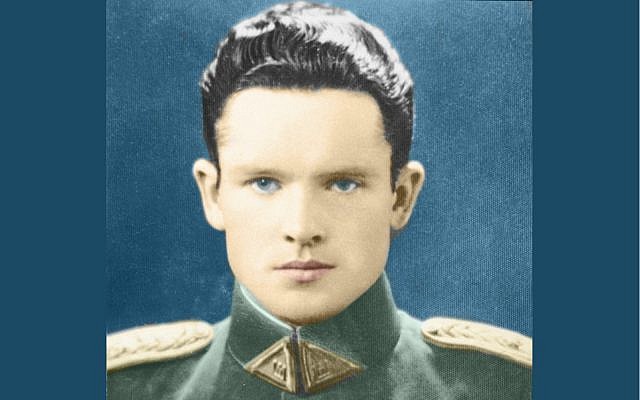 Jonas Noreika from the private collection of his granddaughter, Silvia Foti (Courtesy)

Silvia Foti, the granddaughter of one of the worst genocidal monsters in history, has published an explosive expose of her grandfather, Jonas Noreika, showing that he was indeed responsible for the murder of more than 14,000 Lithuanian Jews. Foti identifies the Lithuanian Government’s odious attempts to revise history as “one of the greatest cover-ups of the 20th Century.”

First exposed by the German magazine Der-Spiegel in 1984, it has long been known that Noreika was culpable in the murder of his Jewish neighbors in Northwestern Lithuania. Yet Noreika officially and legally remains one of Lithuania’s greatest national heroes, and is honored with a plaque on the Vilnius Library of the Academy of Science building. Over a decade ago, this incongruous adulation of a genocidal monster struck me, a Jewish Lithuanian citizen, as reprehensible. I immediately began my campaign to remove this monument. I had no idea that the official conversion of monsters into heroes was a deliberate Lithuanian agenda.

My appeals to Lithuanian officials and diplomats went unanswered and articles in the international press were ignored. In 2015, nineteen of Lithuania’s leading citizens, including Lithuania’s own member of the European Parliament, the late philosopher Leonidas Donskis, signed a public statement calling for the removal of a monument that glorifies a  mass murderer.

The responsibility for examination of genocide in Lithuania lies with the “Genocide and Resistance Research Centre of Lithuania,” under the leadership of Terese Birute Burauskaite. Her public response to the petition, posted on the Center’s Facebook page reads:

The contempt being shown for Lithuanian patriots is organized by neighbors from the East. They are assisted by some Jews, but also by a sufficiently large number of Lithuanians, (their last names [are] listed below the request to rescind the Award [Order] [remove the plaque] in defamatory press articles. Some do it consciously, others – out of stupidity.

My appeals to Lithuanian President Grybauskaite were referred back to Burauskaite. The State Supreme Court and the State Security Agency then also confirmed Noreika’s heroic status. All investigative roads were directed back to Burauskaite and her staff of ideological historians who hue to the orthodox and approve national narrative.

During the late 1990s, Lithuania created a truth and reconciliation commission, The International Commission for the Evaluation of the Crimes of the Nazi and Soviet Occupation Regimes in Lithuania. The Commission collapsed after Lithuanian authorities declined to punish murderers of Jews, and instead investigated Jewish resistance fighters for possibly having committed crimes in order to survive. Under the shadow of international scandal, the Commission dissolved and was later re-constituted. The new executive director of the Commission, Ronaldas Račinskas, recently stated in writing that data showing Noreika’s murderous acts are inaccurate, unreliable, and claims against Noreika  are “total fake.”

Recognizing that appeals to remove the monument of Noreika for moral reasons were futile, I then approached Lithuania’s Heritage Department, to ask for removal simply because the monument did not meet legislated aesthetic standards. Somehow, the Heritage Department was unable to determine their own stated standards and fought three separate court cases which I brought against them. Ultimately, the suits were rejected by the Lithuanian Courts. It was clear that the Courts and Heritage Department agreed with the President, the State Security Department, the Supreme Court, the Genocide Center and the Executive Director of the Lithuanian Commission that Jonas Noreika should remain an unblemished hero. 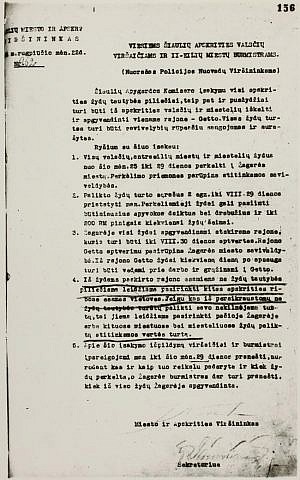 Rejecting all presented documentary evidence of his crimes, the government proposed that I undertake my own academic study and I agreed. Eight months of professional, objective and independent study of many thousands of documents in Lithuania’s own archives produced incontrovertible evidence of Noreika’s guilt. A government spokesperson then posted a response on the Genocide Centers webpage. I was now accused of having possibly contravened Lithuanian law, and the Lithuanian Constitution, by submitting a report which was itself proposed by the government. The government’s response was then not to address a single document containing Noreika’s signature showing his crimes against humanity. I proudly stand in the company of remarkable Jewish Lithuanian partisans in being accused of possible crimes for stating the truth about Lithuanian Holocaust complicity.

The Lithuanian Jewish Community has publicly entered the debate, confirming that Noreika was definitely a Holocaust perpetrator. Without knowing of the multitude of other Holocaust perpetrators who have also been transformed into national heroes, Noreika’s granddaughter describes Lithuania’s historical revisionism as “one of the greatest cover-ups of the 20th century.”

In September 2018, Pope Francis will visit Lithuania. One wonders how he will react when he passes the monument for Noreika. What story will President Grybauskaite invent when asked about the Holocaust denial of Lithuania, if she runs for the Presidency of the European Council in 2019?

Surely, an intricate web of lies will soon be exposed.