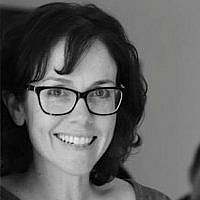 The Blogs
Susie Lubell
Apply for a Blog
Advertisement
Please note that the posts on The Blogs are contributed by third parties. The opinions, facts and any media content in them are presented solely by the authors, and neither The Times of Israel nor its partners assume any responsibility for them. Please contact us in case of abuse. In case of abuse,
Report this post.

Our daughter radiates love. She’s seven and has unbelievable intuition. She understands people and situations. The other day I was watching a video an old friend had sent me from Peter Gabriel’s Secret World tour, a concert we had seen together. My daughter snuggles in close to watch together on my phone and then she whispers to me, is he getting divorced? In fact the whole album has mostly to do with his devastating divorce. How does she know these things? Her emotional intelligence is magnificent. She can probably talk to the dead. I’ll keep you posted.

Unfortunately she struggles in school. She doesn’t disrupt. She’s not looking for attention. She has plenty of friends. She just has trouble reading which, in a normative schooling environment, means trouble with everything, because everything requires reading. We have been working with her for the last year and a half to help improve her reading and comprehension skills and it has not been easy. In fact, in the beginning it was a total disaster. But we kept at it and she has made great improvements as was told to my husband when he went to her parent teacher conference last week. To illustrate just how far she has come her teacher showed my husband a paragraph that she had read and her answers to several questions about the paragraph.

Then he read me the paragraph. I’ll translate it for you:

Yossie wanted to take the bus and stood at the station. Suddenly he saw a black bag under the bench.

“Whose bag is this?” asked Yossie to the others who stood at the station.

None of the other people answered.

“Does someone recognize this bag?” asked Yossie again.

Yossie was invited to the police station and the police chief told him, “You did an important deed. You saved the people standing around at the bus stop.” The police chief gave Yossie a certificate of appreciation with the seal of the Israeli Police Force.

My husband and I looked at each other and then both burst into tears. What are we doing here? Where are we raising our kids? I felt all at once so proud of our girl for all of her hard work and completely gutted by the reality of living in Israel. Why is this paragraph part of the Hebrew reading curriculum? My guess is no other parent gave the content of this paragraph a second thought. Judging by the inclusion of a public telephone in the scenario, this paragraph has been in the curriculum for decades.

There are a million other things to write about! A million other ways to gauge a child’s understanding of a language. Do kids in the second grade in the United States read paragraphs about what to do if a shooter walks into their classroom? Maybe they do. Maybe it’s appropriate. But why would my daughter be at bus stop by herself? She’s not even allowed to cross the street alone until she’s nine. She knows we live in a problematic place. She sees the soldiers. We travel through checkpoints regularly. She watches security officers check my trunk and my bag when we park at a mall. She asks questions and I answer them the best I can without frightening her and without demonizing anyone. Does it have to be part of the curriculum too?

The last question in the reading comprehension was, “What do you think would have happened if Yossie didn’t call the police?”

She answered, “The bomb would have exploded and everyone would have died.”

How’s that for a complete sentence.

About the Author
Susie Lubell is a self-taught artist and illustrator whose paintings feature vibrant folk imagery coupled with verse from Jewish liturgy. Her work has been included in galleries and private collections in North America, Europe and Asia including the Lucille Packard Children's Hospital of Stanford University which hosts her entire collection of watercolor animal illustrations. Susie has a long and complicated relationship with Israel and made Aliya for the second time in 2011 after ten years in California. She's hoping it sticks this time.
Related Topics
Related Posts
Comments