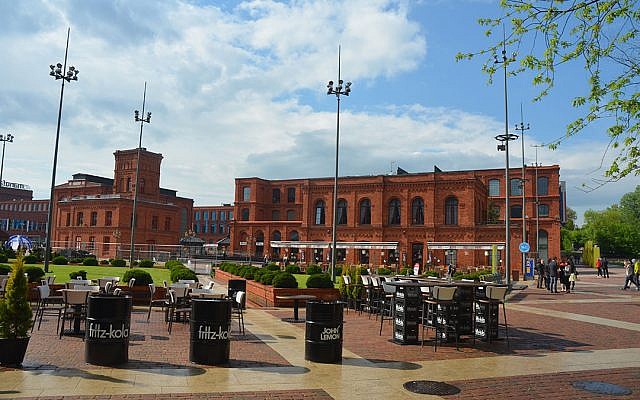 I received the following letter this morning from Krystian Kozerawski, a non-Jewish friend from Lodz, Poland. I first met Krystian five years ago on Linkedin. He was the editor of a Polish Mac magazine, and an Apple developer, like me.  A year later, when he found out I was coming to Poland to work on an app about Jewish Poland, he insisted we meet (along with my younger daughter, who was with me). Despite the fact the Polish Foreign Ministry had supplied us with a guide, Krystian wanted to take us around Lodz. He insisted on spending the day with us to ensure we left with a full picture of Poland. Subsequently, when my son visited his city as part of his high school journey to Poland, Krystian made sure to meet him. Just a few months ago, Krystian came to visit us in Tel Aviv.

My relationship with Poland is complicated. I first went to Poland with my German-born mother in 1991. While she was born in Germany, her parents were Polish. We visited the towns from which my grandparents hailed — and where to my surprise, there were still people alive who remembered them, in 1991. Of course, when we visited Frystag, the town my grandfather or Zayde was from, we did not discuss the fact that two of his brothers had survived the war, only to return and be killed by Poles.

As noted above, I have been back to Poland since, for a work project, on which I was lucky to be able to take one of my daughters along. Today, I have a number of Polish friends. As a historian, I understand the difference between learning from history and living in the past. One last thing that is important to know about Krystian — he is not a supporter of the current government and often expresses to me his fear for the future of Poland’s nascent democracy. Over the past few months, he has been very worried about the rise of right-wing antisemitism. All of which makes this letter all the more important.

Here is his letter:

To my friends in Israel.

I am deeply sad about what is going on now, after the pitiful words of the acting foreign minister of Israel, especially because neither I, nor any of my friends here in Poland, absorbed antisemitism directly from their mother’s milk. While for sure there are many antisemites in Poland, and some worrying tendencies are getting stronger (like neo-nazis and nationalists marches and rallies), I would not say that as a nation we are stronger antisemites than other nations, at least nowadays. Moreover, many Poles, including me, are involved in uncovering or at least keeping the memory of crimes of our compatriots and sometimes our ancestors.

I teach my sons about what Germans, but also Russians, Ukrainians did to Poles during WW2, I also teach them what Poles did to Jews, Ukrainians, Belarusians, Silesians, and Germans too. And let me be clear. While I am speaking clearly about it and I am doing my best to prevent government or just ordinary people to brush that painful history under the carpet, I don’t feel guilty for what some Poles did to Jews, Ukrainians and other nations, as well as, I do not expect the guilt from modern Germans, Russians or Ukrainians. It is because neither of us is guilty of the crimes of our ancestors or those of our kind who committed crimes in the past (and not all of the people in the past were murderers or monsters). We have to, we must remember what happened here in Central and Eastern Europe and not to accuse each other, but to take a lesson out of it and do our best to prevent something like that happening again.

Today, accusing each other of crimes from the past it is just disgusting counting of the bodies. Who killed more, and which nation is more guilty. I see this body counting everywhere. In Poland, there are ones that count bodies of Poles murdered by Germans (during entire WW2), murdered by Ukrainians (during Volhynia massacres). Russians, as well as those Poles killed after WW2 by the communist regime to blame and to prove that we were victims and that the right is on our side. In Ukraine, there are ones who count those who were killed either by Poles or by Russians.

And now in Israel, before the election, there is another body counting. Those who were killed by Poles — and don’t take me wrong. I do know what some Poles did to Jews, especially in the countryside and smaller towns (not only in Jedwabne), mass murders of Jewish neighbors, denouncing hiding Jews to the Germans, plunder of Jewish property, and what Poles did to Jews after the war (not only in Kielce). I am very sad, that these painful facts are not told during history lessons in Poland (I teach my kids those facts myself). But counting bodies for forthcoming Israeli elections and accusing me and my friends and the entire Polish nation of antisemitism is stupid and disgusting.

As a Pole born in 1974, who has been taught for many years about war, crimes and what Germans did to us, I don’t blame anybody who lives today. I have friends among Germans, Ukrainians, and Russians, as well as Jews in Israel and around the world. Should I call my German friends Nazis? Should I call my Ukrainian friends the butcherers of Poles? Or should I call my Russian friends murderers or communists? Of course not. That would be stupid, disgusting and I would be ignorant. So why are some Israeli politicians are calling me an antisemite?

At the end, let me quote Yitzhak Antek Zuckerman, one of the fighters of Warsaw Ghetto Uprising who survived:

“To cause the death of one hundred Jews, all you needed was one Polish denouncer; to save one Jew it sometimes took the help of ten decent Poles (…)” — (Yitzhak Zuckerman “Antek,” A Surplus of Memory. Chronicle of The Warsaw Ghetto Uprising).