An eight-minute music video starring an Israeli and a Tunisian has caused a backlash in Tunisia.

Peace Between Neighbors was released last week by the Arab Council for Regional Integration, an organization dedicated to promoting a culture of coexistence and a spirit of partnership between Israelis and Arabs in the Middle East.

The video, featuring Noamane Chaari, a Tunisian music composer and producer, and Ziv Yehezkel, an Israeli singer who sings mainly in Arabic, extolls the virtues of religious tolerance and regional peace.

The song itself was written by a Yemenite Arab who prefers to remain anonymous for his own safety. Such is the toxic atmosphere in much of the Arab world today.

In my opinion, Peace Between Neighbors is a nice and heart-warming melody, offering a positive and attainable vision of friendship and cooperation among Jews and Arabs and Israel and Arab states.

Considering Israel’s recent normalization agreements with the United Arab Emirates, Bahrain, Sudan and Morocco, it can hardly be dismissed as unrealistic pie-in-the-sky. Peace in the Middle East is possible and achievable if Israel gets serious about resolving its protracted conflict with the Palestinians on a fair and equitable basis and if the Palestinians sincerely accept Israel’s legitimacy.

Chaari and Yehezkel do not appear together in the video, preforming separately from scenic locations in Tunisia and Israel. But they both give voice to the objective of Arab-Jewish reconciliation without once mentioning Israel or the Palestinians by name. In this respect, Peace Between Neighbors is generic and non-political in substance. To some Arabs, however, it is downright subversive, a rebuke to Arab rejectionism.

“I am an Arab who loves his country,” Chaari says in the opening line, signifying his loyalty to the Arab cause lest anyone think he’s a traitor. “In my faith, there is a place for all religions.”

Yehezkel also accentuates the positive: “Our futures are intertwined. Friend, my dream is yours. I seek peace and security.”

After recording the video, Chaari appeared on a Tunisian television, disingenuously claiming that Peace Between Neighbors promotes peaceful relations only between Arabs and Jews, not Israel and the Arab world.

Chaari, who visited Israel and the West Bank in 2019, was compelled to say that he did not betray “the Palestinian cause” and that he partnered with Yehezkel because he “loves Palestinians and has Iraqi roots.” In what can only be described as an absurd and dishonest comment, Chaari then said, “He’s an Iraqi with an Israeli passport.”

To put it mildly, Chaari was less than candid about the underlying message of Peace Between Neighbors. My reading of it is that its lyrics refer implicitly not only to Arabs and Jews, but to Israel and Arab states as well. Further, Chaari’s claim that Yehezkel is not really an Israeli is beyond ridiculous.

Despite his lame attempt to curry favor with Arab opponents of Arab-Israel normalization, Chaari came under heavy fire from the critics he had tried to appease. In addition, he received death threats and lost his job at a state broadcaster.

“Tunisian authorities have targeted his livelihood,” charged Joseph Braude, the founder of The Center for Peace Communications, which encourages civil engagement across sectarian, ethnic and religious boundaries. “Pressure from a senior official caused his firing, and pressure from establishment institutions forced his private clients to leave him. This is a campaign to destroy him.”

Some Tunisians, like the singer Chamseddine Bacha, defended Chaari, albeit by erasing his Israeli nationality. In a Facebook post, he wrote, “I support my friend and colleague, and I reject this smear campaign against his artistic project and his collaboration with an Iraqi artist of Jewish roots.”

The lesson to be learned from this telling incident is that Tunisian Muslims, even those prepared to work with Israelis cooperatively, are reluctant to recognize Israel’s existence.

Israel is the object of hatred and scorn in Tunisia due to the simmering Palestinian issue. In 1985, Israeli aircraft bombed PLO headquarters in Tunis, killing Palestinians and Tunisians. In 1988, Israeli commandos assassinated a prominent Palestinian leader, Abu Jihad, in Tunis.

I assume that the Tunisians who condemned Chaari still remember these incidents. Their hardline attitude aligns with Tunisia’s recalcitrant refusal to normalize relations with Israel. Early this month, after Morocco renewed diplomatic ties with Israel, Prime Minister Hichem Mechichi announced that Tunisia, which is home to a small Jewish community, has no intention of recognizing Israel, saying it is not on his “agenda.” As he put it, “Every country has its own reality, its own truth and its own diplomacy, which it considers best for its people.”

He has obviously forgotten that the Tunisian government forged low-level diplomatic relations with Israel in 1996, only to sever them four years later following the outbreak of the second Palestinian uprising.

And he must surely know that one of Tunisia’s former presidents, Habib Bourguiba, was the first Arab leader to offer Israel a limited form of recognition.

In 1965, he offered to recognize the 1947 United Nations Palestine partition plan, which the Arab League unanimously rejected. Israel expressed a measure of appreciation for Bourguiba’s statement, but understandably enough, his gesture was far too belated and irrelevant. Abba Eban, then Israel’s foreign minister, said, “There can be no return to the 1947 boundaries.”

And that’s where the matter stands today. 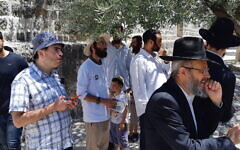