The Blogs
Aliza Green
Apply for a Blog
Advertisement
Please note that the posts on The Blogs are contributed by third parties. The opinions, facts and any media content in them are presented solely by the authors, and neither The Times of Israel nor its partners assume any responsibility for them. Please contact us in case of abuse. In case of abuse,
Report this post.

Many people say they remember exactly where they were and what they were doing when JFK was assassinated. Much like that moment, I will never forget Monday night. My friend and I were in the mall at Dizengoff Center, Tel Aviv. I decided to sign up for an Israeli phone plan. This was such an exciting moment for me in preparation for my new life here. As I was filling out my forms, I got a notification from Channel 2 News (an Israeli news station). Having received notifications from them multiple times a day, and since I was in the middle of something I chose to ignore it until I finished.

After about 20 minutes of waiting impatiently to connect to my new network, my phone began to work again. I felt a huge wave of relief and excitement, and almost cried tears of joy. They say that you don’t really feel like you live somewhere until you have a phone. At the exact same moment, my friend told me she got a text from her brother, who is in the army. He sent her a link to a news article. She looked at me and said, “I think they found them…” For a brief moment, the excitement continued. This was the moment we’d all been praying for. In the blink of an eye, my excitement about my new phone plan vanished, and my tears of joy turned to tears of pure devistation and heartbreak. It was true. Eyal Yifrah z”l, Naftali Fraenkel z”l, and Gil-Ad Shaer z”l were found…dead.

The tears just flowed uncontrollably. I was so angry I couldn’t even think straight. I turned to my friend. “I hate people like this,” I told her. She looked at me and said, “It’s ok. You’re going to do something about it soon.”

Friday, June 27. I’d been in Israel for 9 days staffing a trip, and we were spending Shabbat in Jerusalem. Because Shabbat didn’t come in until after 7PM, we took the kids to the Western Wall, and gave them pieces of paper so they could write notes and place them in the wall. I can’t remember the last time I wrote a note, but this time I felt like it was necessary. I can truly say that I have reached a place in my life where I am happy. That is why I decided that this time, when I wrote my note, I didn’t want to ask for anything.

As I began sharing my thoughts with Gd, I said that instead of asking for something, I simply wanted to say thank you for all I have, and for all that is about to happen in my life. In the midst of my happiness however, I couldn’t forget that there were 3 boys who were still missing and were spending yet another Shabbat without their families. Before folding up my note, I wrote a prayer for the safe return of the boys (Eyal Yifrah z”l, Naftali Fraenkel z”l and Gil-Ad Shaer z”l), and for the safety of all those looking around the clock to bring them home.

Shabbat came and went as usual, and on Sunday the group flew back to America. As I said goodbye to them at the airport, thousands of people were gathered not far away in Rabin Square in Tel Aviv. The mothers of the 3 boys were speaking at a rally supporting the #BringBackOurBoys campaign. Many of my friends posted pictures from the rally, and one even brought me a sticker that I put on my laptop. It said in Hebrew, “We won’t sleep without our boys.” When people spoke about the boys, even those who didn’t know them personally, it was as if they spoke about bringing back their own sons. Unfortunately, we live in a harsh reality here in Israel, and it is understood that if it wasn’t these 3 boys, it could just have easily been someone else’s children. The nation united to strengthen the familes of Eyal z”l, Naftali z”l, and Gil-Ad z”l, making it very clear that they were not alone. In fact, Jewish unification was seen all over the globe. This was not just an Israeli issue. It was an issue of 3 boys, who had their futures stolen from them simply because they were Jewish.

Even though they had been missing for almost 3 weeks, everyone in Israel remained optimistic that the boys would come back alive. But I think this optimism came from a twisted place. The kidnapping was a clear act of terror, and there tends to be a sick pattern when things like this happen. Terrorists have realized that killing those they kidnap does them no good. Especially since the release of Israeli soldier Gilad Shalit, we’ve come to the conclusion that the overall goal is to keep their victims alive and use them as a bargaining chip during a prisoner release deal. They give us, in this case, 3 of our people for sometimes thousands of their people who are sitting in Israeli prisons for commiting mass murders and terrorist attacks. This reasoning aside, the entire Jewish world sat on pins and needles waiting to hear the boys were found.

The news spread throughout Israel like wildfire. At the time, everyone was pretty wrapped up in the World Cup match. The screens that were set up all around Tel Aviv quickly changed from football to news, and the city that never sleeps practically fell silent. The moment the news was released, it seemed like the entire country went into a state of mourning. As my friend said, it was almost like it was meant to happen during a time where everyone was glued to the TV. It was meant for everyone to see and to hear.

We walked around for a short time deciding if we should go home, or continue our walk to the beach where we planned on eating dinner and relaxing with a few drinks. In the end, we decided to go, though most of the time we were there, we were glued to the projector screen, originally set up on the beach to watch the game. As we sat there, we just kept saying we didn’t know what to do, or how to feel.

Eventually the newscast ended, and the game returned to the screen. Later that night, we found out there was a candelight vigil being held for the boys in Rabin Square, so we caught the tail-end of it. The following night there was another at 9pm; 6 hours after the boys had been laid to rest. It truly was a beautiful sight to see religious and secular Jews sitting together and joining in song. Rabin Square was full of people lighting candles, and playing guitar and singing both religious songs, and songs of peace and unity. In the background we could hear people cheering as they watched the World Cup. It was hard for me to understand how people could still laugh and be happy at a time like this.

Right before we left the square, someone broke out into the song “Am Yisrael Chai” (Translation: The nation of Israel is alive!). I couldn’t hold back my tears as I swelled with pride at our nation’s strength. In an instant, the atmosphere went from that of mourning, to celebration. This moment was actually a great metaphor for Israeli society. Our society is one of extremes, and the best example I can give is the Hebrew language itself. Natalie Portman said it best. “Where there are countless words for “to bother,” but no single one yet for “to pleasure…”Where to become religious is described as “returning to an answer” and becoming secular “returning to a question.”

In a place that has experienced so much tragedy and hostillity, to snap back to normal every day life, is not only common, but necessary. It seems like that has successfully happened in Tel Aviv. In Jerusalem, however, the atmosphere is quite different.

Wednesday was probably one of the most stressful days I’ve ever had in this country. Tensions were high, especially in the south and in Jerusalem and the West Bank areas. People here are far from ready to snap back into every day life. Simply put, they are outraged, and have very clearly shown it. Since the funerals, radical Jews have been staging protests and violently expressing their anger.

Wednesday morning, Israeli police found the body of a 16 year-old Palestinian boy. It is believed that he too was kidnapped, and murdered for revenge against the murders of the 3 boys. It makes me sick to my stomach as I type this, and I am truly heartbroken that this is the path that these extremists chose. I am more sickened over the fact that if this truly was a revenge killing, it was committed by some of my own people. People of a religion that prides itself on the value of life.

Needless to say, this discovery sparked a wave of violence that has continued through the night. Riots broke out all over Jerusalem, particularly in Arab neighborhoods. Police were all over the city, and there was a disruption in public transportation. I think it’s safe to say that there is an overall feeling of distrust and paranoia setting in. As I hopped on and off the light rail, and buses, I couldn’t help but remain extra alert, paying attention to everyones actions, their bookbags and pocketbooks. Up until an hour or two ago, helecopters were flying through the air (which isn’t such a common sight) and I heard gunshots coming from the Arab neighborhoods around me. The sound of police sirens seems like it hasn’t stopped all day.

Everything is very fragile now. Israel wants to find the men responsible for the kidnapping, yet no one wants another war. I think at least in Jerusalem, the big fear is that another intifada will break out. No one really knows what will happen here, so I suppose we will have to wait and see how things continue to unfold.

Coming to Israel for a short visit before making Aliyah scared me. I realized there was a chance that I would come here and have doubts, or even worse, actually see that I don’t belong here. Perhaps I’m facing the real test now, during the time of a national tragedy and rising tensions. However, after the last few days, I can honestly say that there is nowhere else I’d rather be during this time. I am proud to be Jewish, and proud that I will be serving and defending not only Israel, but the Jewish people, and as my friend said “doing something” about the situation here.

As I enter this next chapter, and as the country enters into a time of uncertainty, I would like to leave you all with a quote by the family of Naftali Fraenkel z”l. “There is no difference between blood and blood. Murder is murder…There is no justification, no forgiveness, no atonement for any murder.”

My heart goes out to all who are mourning. May HaShem watch over us and keep us safe, and may we soon enter a time where we no longer know such tragedy. 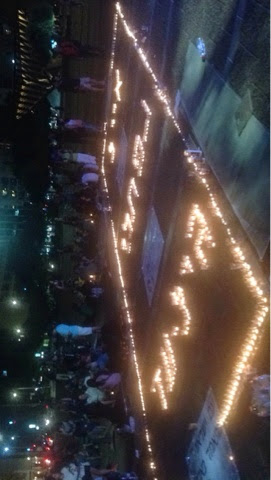 About the Author
Aliza Green is 23 years old, and was born and raised in Philadelphia, Pennsylvania. After graduating college with a degree in Middle Eastern Studies in 2013, she made Aliyah in 2014. With the help of Tzofim Garin Tzabar, she will be enlisting in the IDF later this year.
Related Topics
Related Posts
Comments