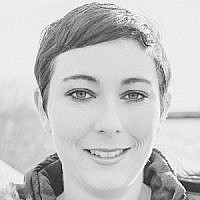 The Blogs
Sara McCleary
Apply for a Blog
Please note that the posts on The Blogs are contributed by third parties. The opinions, facts and any media content in them are presented solely by the authors, and neither The Times of Israel nor its partners assume any responsibility for them. Please contact us in case of abuse. In case of abuse,
Report this post.

Last February, a Toronto imam made national news when a video came to light of him praying in Arabic for what appears to be the destruction of Jews. “O Allah! Count their number; slay them one by one and spare not one of them. O Allah! Purify Al-Aqsa mosque from the filth of the Jews!” read the video’s translation of the imam’s words.

Ayman Elkasrawy, the man who made the apparently antisemitic prayers, became the subject of outrage and controversy, with Canadians of all backgrounds condemning his words.

Now, the Toronto Star is trying to rewrite Elkasrawy’s story.

In a longform piece published October 22 and written by Identity and Inequality Reporter Jennifer Yang, the imam discusses the repercussions he has faced, including suspension from his mosque, termination from his job as a teaching assistant at Ryerson University, and the opening of a hate crime investigation concerning his words. Importantly, he claims that the translation that has circulated does not accurately reflect what he had been trying to say, so the Star recruited translators to help figure out what he actually said.

“As for ‘Purify the Al-Aqsa mosque from the filth of the Jews,’ a more accurate translation is ‘Cleanse Al-Aqsa mosque from the Jews’ desecration of it,’ according to Nazir Harb Michel, an Arabic sociolinguist and Islamophobia researcher at Georgetown University,” reads the Toronto Star piece. The piece also clarifies that when Elkasrawy said “Jews,” he was using it as it is “widely used in the Arabic-speaking world” to mean “Israeli occupiers.”

Okay, I see now. He meant to pray for Israelis to be denied access to what is arguably the holiest site in all of Judaism, the Temple Mount. Well then, wasn’t it silly for everyone to get so upset and call him antisemitic.

But wait, Bernie Farber says he’s not antisemitic. “‘He said something that’s highly charged and highly political and could be anti-Zionist – but it’s not anti-Semitic,’ Farber says. ‘And that changes the flavour of this,’” reads the article. If a well-known member of the Jewish community says Elkasrawy isn’t antisemitic, then that’s that, case closed, let’s all go home.

At least, that’s how the article reads. I agree that it is important to give people the benefit of the doubt, especially when they’re being charged with something as serious as a hate crime. Yet the author of this article undoubtedly goes too far to try to rewrite Elkasrawy’s story, an effort for which they’ve clearly recruited Farber’s help.

The entire article is focused on making Elkasrawy out to be an innocent man who was a victim of “rising anti-Islamic sentiment.” From Yang’s description of Elkasrawy (“the bearded and bespectacled 32-year-old has an understated presence for someone who looms so large. He speaks softly and hesitantly; in the presence of strangers, he tends to fade into the background.”) to her total avoidance of the anti-Zionist (and, according to many, therefore antisemitic) nature of what the imam “actually said,” the piece utterly downplays the seriousness of any interpretation of Elkasrawy’s prayers.

Yang offers interpretations of the imam’s prayers from “five Arabic experts who independently analyzed Elkasrawy’s prayers at the Star’s request.” She offers as their qualifications that they “are Arabic translators, linguists and university professors with published book chapters, academic papers and textbooks,” and provides only a job title when citing each individual interpretation.

Meanwhile, Jonathan Dahoah Halevi, the man who provided the first translation of the prayers for CIJ News, is featured in a lengthy profile, explaining his background with the Israel Defense Forces, his work as a pundit for right-wing media sites, and the praise of his work by “the ‘anti-Islamist’ blog Point de Bascule.” It is a clear attempt to discredit the translation.

The website Honest Reporting, however, has shared similar profiles of the Star’s so-called experts. One, it notes, has been accused of providing “whitewashed translations” of Islamic prayers, and is ardently anti-Israel, along with two other academics cited by the Star. “Shouldn’t this be disclosed?” Honest Reporting rightly asks.

Similarly, any other critics of Elkasrawy’s words are accused of being far-right (read, “racist”), particularly right-leaning Jews. “Jewish people on the far right are among the loudest voices in the anti-Muslim movement,” writes Yang, with absolutely no facts or examples to substantiate her claim.

Yang calls Elkasrawy’s story one “about the sliperiness of language – especially in a climate of viral misinformation,” but in reality, it’s about an imam’s inappropriate prayers and a Toronto Star reporter who seems to feel that it makes us Islamophobic if we call a man’s actions what they were – antisemitic.

About the Author
Sara McCleary has written extensively on a wide range of topics while working as a news reporter and freelancer, though she tends to focus on issues related to social justice and the environment. She has completed a Master's degree in history, and further graduate work in interdisciplinary humanities.
Related Topics
Related Posts
Comments