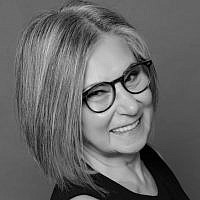 The Blogs
Sharon Klaff
Apply for a Blog
Advertisement
Please note that the posts on The Blogs are contributed by third parties. The opinions, facts and any media content in them are presented solely by the authors, and neither The Times of Israel nor its partners assume any responsibility for them. Please contact us in case of abuse. In case of abuse,
Report this post.

On 26th July 2015 we delivered to the door of Number 10 a letter addressed to you in which we asked that you, as Prime Minister of the United Kingdom, dissent from the P5 + 1 Iran agreement.  We quoted from your Birmingham speech:

“When we allow the extremists to set the agenda of the debate…” and we told you that we considered that speech to be of Churchillian proportions – and we meant it.

In view of that speech it is puzzling that you have thus far not distanced yourself from a deal that ignores the abysmal Iran human rights record, that omits to demand the release of the four American hostages held in Iran, that fails to include a clause compelling Iran to stop the continuous rhetoric, the statements of intent that call for Israel to be extinguished off the face of the earth.

What is the urgency to prematurely conclude a deal that provides for Iran to police its own nuclear facilities, that allows a 24 day time-frame for inspections to commence, that accepts secret side agreements between Iran and the IAEA, that audaciously postulates that the only alternative to this hasty deal is war, so that once again, after 70 short years, we will be living under the bomb, this time a nuclear loaded bomb?

Neville Chamberlain’s “peace for our time” appeasement never worked in that September of 1938 when he stood on the steps of Number 10 advising the chanting crowds to “go home and get a nice quiet sleep”, the only sleep over the next decade being that induced by showers of gas, starvation and homelessness.

When you step outside Number 10 this September of 2015 to announce your consideration, the weight of history will rest upon your shoulders.

We urge you Mr Prime Minister to confirm your dissent from this deal as Churchill would have done and not to advise us to get a nice quiet sleep, for such a sleep will become the nightmare of our times.

About the Author
Sharon Klaff lives in London with her family where she is active in combating replacement ideology and antisemitism. She is a founder member of Campaign4Truth, the grassroots group established in 2009 and affiliated with Eye on Antisemitism monitoring anti-Semitism on social media.
Related Topics
Related Posts
Sharon Klaff
Comments