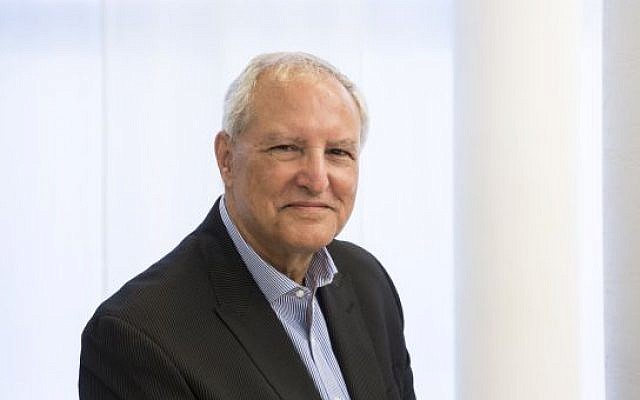 If you want to read a thoroughly researched, well-written and fascinating account of how one man made a life-long journey from extremism to moderation, this is a book for you. It is the story of Mohammed Suleimann Dajani Daoudi, a Palestinian academic and activist who lives in Jerusalem, whose life story is both instructive and inspiring. It is written by a former student of his — from the days when he taught at Al Quds University in Jerusalem –and it is based on her doctoral dissertation for the Frederich Schiller University in Jena, Germany, where she lives and works now.

Barakat traces Dajani’s evolution from extremism to moderation in a very detailed and descriptive manner, which points out very clearly the most important influences in his life. In her preface to the book, she explains clearly what the book is about:

The book examines his family background, his personal and national narrative, his changing attitude of behavior and the ethical point of reference influencing his way of thinking and his perception. It analyzes the deep-rooted ethical teaching he received from various sources, formal and informal, familial as well as from a university perspective that moved him from the periphery to the center… becoming committed to seeking moderation, reconciliation and democracy.

Barakat traces Dajani’s journey form extremism to moderation in great detail, from the days when he was a student radical in Lebanon and active with the Fatah movement, to his years of study in the USA where he earned two doctorates from American universities, to the time when he returned to Israel in the mid 1990s and was active in working with emerging Palestinian government ministries, and to the years of his establishing the program in American Studies at Al Quds University and teaching there (from 2002-2014). Indeed, the author of this book did her master’s degree in this program, and while she was a student at this university, she was profoundly influenced by Dajani’s personality,  his teaching methods and messages, and his caring and nurturing of students, about which she writes at much length in this comprehensive and compelling book. In addition, Barakat relates some of the most pivotal moments in his journey towards reconciliation, including some profound and inspiring encounters with caring Israeli doctors, medical staff and even soldiers when his father and later his mother became ill and needed urgent medical care.

Dajani established the Wasatia Movement to promote the humanistic message of moderation, tolerance and the need for positive dialogue to transform Palestinian public opinion, help create trust and to have more faith in the process of negotiations…. Dajani’s concept of Wasatia rests on one idea: the essence of life is found in justice, balance, moderation, middle ground and centrist ideas shared by holy books and articulated by religious scholars and political philosophers.

Much of chapters four and five of this informative book is devoted to outlining the religious and philosophical underpinnings for Dajani’s new movement and for his personal outlook on life.  Barakat also devotes a chapter to Dajani’s views on reconciliation and peace, especially focusing on his Big Dream, Small Hope model. Following the Oslo accords in 1993, there was a sea change in the way that Palestinians and Israelis engaged one another:

This became the theme of the Big Dream Small Hope model for conflict resolution.  The idea for this was inspired by a famous quote from the great Palestinian poet Mahmoud Darwish who said What is more important, a big dream or a small hope.? Since 1998, when Dajani facilitated a dialogue between Israeli Jewish and Palestinian Arab teachers in Turkey, he has been promoting the ideas of reconciliation and compromise as necessary components to reaching a peace agreement and learning to live in peace together for Israelis and Palestinians.

Furthermore, Barakat describes with great profundity a project with which she has been involved with Professor Dajani for the past four years entitled Hearts of Flesh Not Stone: Encountering the Suffering of the Other, funded by a German foundation. The goal of this groundbreaking and controversial project was to study if encountering the suffering of the other influences reconciliation in the midst of conflict, and if so, to what extent. Professor Dajani took a lot of heat from the Palestinian community in Jerusalem from his involvement in this project, especially after he took 27 Palestinian students to Auschwitz in 2014–which is documented in this book–and he resigned from the university to continue to devote himself to teaching empathy through reconciliation, which is what he believes in. Despite all the controversy around this study tour, Dajani has made it clear over and over again that he did not regret the trip and that he would do it again if given the opportunity.

Barakat concludes her book by words of praise that are shared by many people, including myself, who have come to know him and his philosophy over many years:

By opening this door that had been shamefully closed for generations, Dajani courageously led his people to a faraway land no one before had dared to go. He is an inspiration for people searching for peace and reconciliation in a world full of conflict, anger, hate, insecurity and phobia.  Such a person can be a role model for change, bringing the people a spirit of hope through the promotion of moderation, reconciliation, conflict resolution, peace and democracy.

Once you have read this book you too will be inspired from this story of a remarkable journey from extremism to moderation.