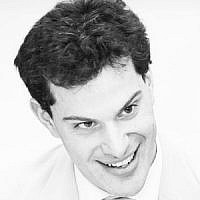 The Blogs
Adam Karni Cohen
Apply for a Blog
Advertisement
Please note that the posts on The Blogs are contributed by third parties. The opinions, facts and any media content in them are presented solely by the authors, and neither The Times of Israel nor its partners assume any responsibility for them. Please contact us in case of abuse. In case of abuse,
Report this post.

I already know how this diatribe will end. A note of optimism that will sound naïve to those caught in the middle of the storm.

But the storm is temporary; the optimism is permanent, because the land goes on. Even the people on it are temporary, their fights brief. This land has seen so much blood.

I believe and will always believe that out of this wet soil – forever wet despite the heat – will come a fresh crop, something new, that will end the endless cycle.

This may well be read only by Jews but it is aimed at everyone, especially those outside of Israel, Gaza and the West Bank.

It is a call for anyone reading these words to calm the *%^@ down.

The view from the outside

The current storm is a blip for all but those caught in it, but the furore of outrage that has sprung up around the world makes it seem like this is permanent, irrevocable, and evil. I rather think the furore helps make that true.

The only time everyone starts complaining is when Palestinian/Israeli bodies are dropping.

(Different to, say, Syria, where bodies dropping is no longer news. Where it’s harder to be black and white, because they say the rebels include terrorists, who want to kill us in the West, and we don’t want to look stupid, like the CIA in Afghanistan in the 80s, and support our future killers… Ditto Iraq. Ditto Libya. Ditto etc… But friends, really, why have most of you had nothing to say about the Middle East during some of the most exciting and bloody years of its history – until now?)

This outrage will change nothing. It is, literally, futile. What will yelling achieve? Write to your politicians, stand outside the embassies, paint yourself in blue and white or red, black and green: do you think anyone will listen to you?

As usual, everyone is playing their part. A tiny analysis can summarise: out of some 200 posts on my Facebook newsfeed commenting on Israel, roughly 100 were by Jews, 100 by Muslims/others. Of which: 100 pro-Israel, 100 pro-Palestinian. No one is down the middle, no one is crossing ethnic lines.

Suppose one side is right. Do you really think the other side gives a *%^@ ? (Definition of “partisan” in Oxford dictionary: n. 1 a strong, esp. unreasoning, supporter of a party, cause, etc… adj. 2 loyal to a particular cause; biased. My bold.)

So reductive, so post-modern. There is no truth? Of course there is: the truth is in the numbers. 195-4 (and counting). This is worse than Brazil-Germany! Which means, when I think about it, that all my pro-Palestinian friends are saying, we want more Jews killed to even up the numbers!

Of course not. They are saying: we want the Jews to evacuate Gaza (but that’s been done), to build a missile defence system so they don’t have to retaliate against the rockets from Gaza (done), to stop oppressing the West Bank (but this is about Hamas, not Fatah), to stop barricading Gaza (but then there’d be more rockets), to sign a ceasefire (you need two sides to agree to that), or a peace agreement (with whom?) – or even, they might actually be saying, go home, Jews! (Which is…where?)

Meanwhile, in a small corner of the Middle Eastern part of my brain

I know the above paragraph is controversial. I can take issue with every statement long before anyone else does. The snide bracketed bits are the IDF military spokesman inside of me. (In case you didn’t know, most Jews have one of those. They are small and green and quite cute until they open their mouth.)

The fighting never stops in my head, but every time one of these conflagrations comes around, it accelerates in response to the media outrage.

I was sitting with a Jewish friend when they found the dead teenage Israelis. “Just watch,” I said, “the troops are massing. The government is going to screw this up, and all the Jews will be cheering from the sidelines.”

“You didn’t even say a word about those poor kids,” she said. And she thought, “Whose side are you on?”

Thus the voices in my head begin their battle.

It starts, says the first voice, with the dead Israeli teenagers.

What the hell, says the second, were they doing in the West Bank?

That is where they live. That is their land.

That they stole in ’67 (or since) from innocent Palestinian farmers.

Your innocent Palestinian farmers have been slaughtering my people since the day they arrived in the country.

Aha! So you admit – arrived – they don’t belong.

You know the history as well as me. The Jews came back to their promised homeland after two thousand years of exile.

This wasn’t a German sunbed. You can’t leave a towel and come back to claim it. Plus the bed wasn’t empty: Mark Twain is an idiot.

How did we get all the way back to the start of the state? Why can’t you just accept – Israel exists, now we work out how do to deal with it.

Why can’t you just accept – Palestine exists, now we have to work out how to deal with it.

Do you know nothing about recent negotiations? Barak, Olmert – we have offered the Palestinians everything they wanted and they said no!

Everything? You offered to give Jerusalem back? And the right of return? You came back after two thousand years. Do you think that after only seventy years, people are more willing to give up on their land?

This isn’t realistic. Nor is it even accurate: downtown Tel Aviv was sand, not some orange grove.

Peace in Israel today is on Israeli terms. Israelis live in plush apartments by the beach, they travel wherever they like in the world apart from maybe Iran and Syria, they don’t have any pressure to negotiate with the oppressed, deprived Palestinian people.

First, Israelis aren’t just Jews – there are Muslims and Christians. Second, you have clearly seen nothing of the poverty throughout the country. And third, the Palestinians receive more development aid per capita than any other people on the planet. Why has that money not helped?

It is guilt money. It is blood money. Palestinians don’t want money, they want land and freedom.

Then let them send the money back!

If you ever visit the West Bank, you will see hard-working, independent individuals dragging their land into the twenty-first century. And if you stay long enough, you will see Israeli settlers and their soldier guards stealing what has been developed.

Your story is wonderful, except it forgets the endless patrolling the Israeli military has to do to stop real and present threats.

What about the Arab taxi driver who took us to the airport one day? The one who wouldn’t get into an argument about any details, who just kept saying, I want peace.

Shame that we are just

voices in a head…

We don’t want this to end the way apartheid did!

When I lived in Johannesburg, I had a fantasy – that one day I would move from Melrose Arch, where I lived behind a security fence protected by two guards 24/7, to Soweto, the beautiful and ugly black township south-west of the city.

My girlfriend at the time worked in a restaurant with many black colleagues. She told them what I planned, and made me sit down to hear each one tell me I was crazy and must not do it. As one man said succinctly: “They will kill you.”

Apartheid is dead, long live freedom. But the freedom that exists in South Africa today is still nowhere like the kind of freedom I have experienced as a Jew walking beside Muslims on that beautiful stretch of boulevard between Tel Aviv and Yaffo.

I want that – I want to pay whatever price is needed to keep that as the minimum, from which we evolve. There are precedents. There is Northern Ireland, if you are a one-statist, or the former Yugoslavia, if you are a multi-statist.

Here is a prelude to optimism: we will get there. Anyone who has dealt with Palestinians and Israelis knows that they are brilliant, commercial sons of bitches. The moment they stop fighting each other, the rest of the world will be in trouble.

Perhaps this is a conspiracy.

The story so far

Each side has its narrative of how we got here, and how it will evolve. The narratives are black and white, and cannot be reconciled.

There is no way an Israeli will persuade a Palestinian that the women and children now being killed in Gaza were sacrificed by terrorists, rather than innocent victims of the IDF.

There is no way a Palestinian will persuade an Israeli that this conflict is about Palestinian independence, rather than an attempt by Hamas to achieve their stated aim of destroying the Jewish state.

(By Jew/Israeli and Arab/Muslim, I mean the generality, not the enlightened beings who are above all this and therefore count for approximately 0% of the populations.)

No narrative is correct, nor will any narrative today be the final one. Three hundred years from now, the history will tell a story different to any that exist today.

Look to the past

We must go back, they say, to understand how we got here.

So let’s go back, let’s start with… But this goes wrong immediately.

As anyone who thinks about history knows, there is no starting point, only an arbitrary decision to jump on the history treadmill at some date and start running.

As are, for example, explanations of how the recent talks between Abbas and Netanyahu’s emissaries broke down.

Look to the present

Let’s start with 2014. Let’s start now. Let’s say: wherever we are now, where can we realistically go from here?

Let’s try to find consensus. Is there anything we can all agree on?

How about, this situation is untenable. We cannot continue. This has to stop.

No, say the Palestinians, this situation benefits Netanyahu and his cronies who want a greater Israel and don’t want to have to negotiate with a united Palestinian leadership.

No, say the Israelis, the deaths of innocent Palestinians benefits Hamas against both their mainstream and more radical rivals.

NOT IF THAT MEANS COMPROMISE!

Ok, can we agree on this then: the Middle East is a fiery bowl, the regional equivalent of a match factory on top of a volcano beside a forest in the middle of a dry summer.

So, can we all please calm down and have a dialogue rather than throw missiles? Does the world need more partial truths on the Arab-Israeli conflict?

What I am proposing

A Community of the Reasonable and Pragmatic.

We don’t let the divisive among us divide us.

We try to build, not destroy.

BUT WHAT ABOUT THE

Whatever you were about to add after “the” – let it go.

About the Author
Adam Karni Cohen is a British-Israeli businessman and writer. He works with growth businesses in healthcare, technology, finance, and consumer services, and advises a number of charities. He is writing a novel based on classical mythology. His journalism has appeared in the Jerusalem Post and Investors Chronicle, and his fiction writing in Freshly Hatched and Sleet magazines. He lives in London.
Related Topics
Related Posts
Comments