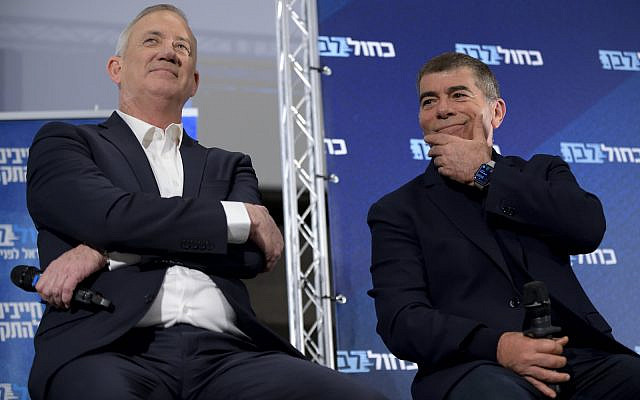 Benny Gantz, head of Blue and White party and MK Gabi Ashkenazi at an election campaign event ahead of the March elections, in Kfar Saba on Feb 12, 2020. (Gili Yaari / Flash90)

I write to you, Minister of Defense Benny Gantz and Foreign Minister Gabi Ashkenazi, as one of your faithful supporters, who voted for your Blue and White party no less than three times in the last 18 months and who would have continued voting for you, for as long as our torturous electoral process required. Like many of your voters, I was heartbroken when you joined this government, though I understand why you did so and support your decision to spare us a fourth election and political chaos. Most of all I am grateful for your efforts to protect our democratic institutions from the right’s assault on their legitimacy.

Now we need you urgently – to give voice to your centrist voters who vehemently oppose the impending annexation of parts of the territories.  According to media reports, the Trump administration will withhold support for annexation if it senses a split in the Israeli government. And without Trump’s backing, Netanyahu will almost certainly refrain from annexation. That means that you both could be the last best hope for preventing this self-inflicted disaster in the making.

As a centrist, I believe that all of the land between the river and the sea belongs by right to the Jewish people; reality, though, leaves us no choice but to partition the land.  Even if peace isn’t possible for the foreseeable future, we have the responsibility to prevent steps that would lead to a bi-national state, destroying our ability to balance Israel’s essential identities as a Jewish and a democratic state.

I know you are both acutely aware of the potential fallout of annexation – on our peace treaty with Jordan, our security cooperation with the Palestinians, our tentative but historic first steps in relations with the Saudis and the Gulf States.

Instead I want to draw your attention to another fateful consequence: the impact of annexation on our ability to fight the war for Israel’s legitimacy.

For the last 20 years, since the Second Intifada, I’ve been among those defending Israel on the lecture circuit in America and elsewhere. I speak regularly on campuses and in liberal churches and before progressive leaders – audiences that tend to blame Israel for the conflict.  The single greatest asset I’ve had in making our case has been Israel’s moral credibility: the fact that we said yes to the Clinton Proposals while Arafat responded with four years of suicide bombings; that we continued to insist that all options, including the eventual creation of a Palestinian state, remained on the table; that we resisted the temptation to decisively determine the legal nature of the territories.

If we annex any part of Judea and Samaria, the message will be that we accept the permanent existence of two categories of people in the territories, one with the rights of citizenship, the other disenfranchised.

There is no “good annexation.” Any form of annexation – whether of the Jordan Valley or of all the settlements or of settlement blocs – will undermine the core commitment Israel has made for decades: our willingness to negotiate over disputed territory. Instead of Palestinians being perceived as the rejectionists, now that role will pass to us.

I frankly don’t care how we are perceived by those who hate Israel and seek to turn us into the criminal among nations. But I do very much care about how we are seen by our friends.

Annexation will be a betrayal of those around the world who are heroically fighting to protect the good name of the state of Israel. Annexation will betray those young Jews who publicly identify as Zionists in a culture that increasingly defines “Zionist” as “racist.” Sending them to defend us on campus in the aftermath of annexation will be the equivalent of dispatching soldiers into battle without ammunition.

Even as it will weaken our friends, annexation will strengthen those within the Democratic Party challenging its traditional pro-Israel position, as well as those seeking to link the Black Lives Matter movement with the Palestinian cause.

Every morning I wake up to a view from my porch that offers a sober warning against annexation. I live in the French Hill neighborhood at the edge of northeast Jerusalem, and on the hill directly across from my apartment is the Palestinian village, Anata.

The security barrier separating French Hill from Anata, which was annexed in 1967 as part of greater Jerusalem, has excluded the village from its municipal boundaries.  As a result, Anata often lacks basic municipal services like garbage collection. Schools have suffered neglect and drug gangs have thrived. New apartment buildings, built hastily and without authorization, loom over the wall, attempting to overcome confinement. The most intimate contact between residents and Israeli authority is the periodic outbreak of riots and stone-throwing pitting teenagers against soldiers.

Beginning the process of annexation risks turning whole parts of Judea and Samaria into no-man’s-land like Anata, Palestinian enclaves beyond anyone’s jurisdiction or concern.

You have both enthusiastically embraced the Trump Plan. But that plan isn’t an invitation to unilateral annexation in any form; it is, rather, a suggestion for a deal and an invitation to negotiate. Let the Palestinians continue to be the nay-sayers. Our responsibility is to do everything we can to affirm the integrity of a plan we have endorsed.

Annexation is an ambition born in sin: an indicted prime minister worried about his legacy and who no longer places Israel’s interests before his own, promoting a policy he himself rejected in the past as reckless.

Benny and Gabi: Don’t compromise with that recklessness. Stand firm against any  attempt to sabotage the possibility of separation between the Israeli and Palestinian peoples, to permanently bind us to the rightwing vision of disastrous entwinement. We need you now to be the voice of the sober center.