In May 2018, after a few weeks of kite and balloon terror (kites or balloons launched from Gaza by Hamas-backed terrorists, in order to land in the dry wheatfields and nature reserves of the Negev, to cause destruction) I began a daily routine of uploading pins to a Google Map, to represent the fires in the Western Negev caused by this new form of terror. The first fire I documented was from May 8th 2018 and the dots appear in the legend chronologically. The ones on top represent the earliest. To see the most recent ones, scroll down the legend to the very bottom. You’ll need to scroll down more than 1,660 dots, but you’ll get there in the end. The red dots, when clicked on, open to show the place and the date. If I could upload pictures of the incident, the dot is yellow. When I had footage, it was linked and colored orange. I maintained this nightly “ceremony” of trying to show the country – and the world – the extent of this destruction, which continued into the following summer, as well. The dots piled up and when you look at the map you can clearly see which communities have been most repeatedly impacted by these fires, and how wide an area has been affected. Last year, I wrote about this in more detail and if you wish, you can read about it here.

This summer we were relatively terror-free, that is until 15 days ago. Seemingly, with the outbreak of the COVID-19 pandemic, peace also had broken out. Clearly that was just an illusion. For the past 2 weeks, we who live in the Western Negev, have again begun to have this fire-terror inflicted upon us. I may have made a mistake in not positioning the pins on a layer of the map, but rather placing them on the base map. Had I made layers: a new layer for each year, viewers could have turned the layers on and off to isolate the view of the extent of destruction in that particular year. Yet, how was I to know that this would go on for more than one year? Who would have ever predicted that this would literally turn into a trend, a phenomenon that the IDF has still been unable to snuff out. This ongoing trend has repeated itself, and along with it the vital lesson that is teaching all the children of the Negev that kites and balloons are no longer innocent toys.

In order to show some sort of differentiation, I have decided to change my tactics. Now, the first fire that I add for that day, gets a date in the title and the words FIRST FIRE OF THE DAY. The pins I upload are blue flames rather than red, yellow or orange in order to provide a clear graphic of the damage and destruction that is being caused each day by this cheap, accessible tool of terror. The low cost of this weapon gets more bang for its buck, and despite the fact that these balloons are not legally allowed to be imported into Gaza, a different story is told by the burnt fields, trees and wildlife.

At day’s end, the story, here in Israel, is told by the blue pins on the map, and simply looking to see how much fire blazed in our region on that specific day. The following day – when time allows me – I adjust the blue pins to red (or yellow or orange, if I have additional media to add) and start the day again, with the newest fires placed as blue. 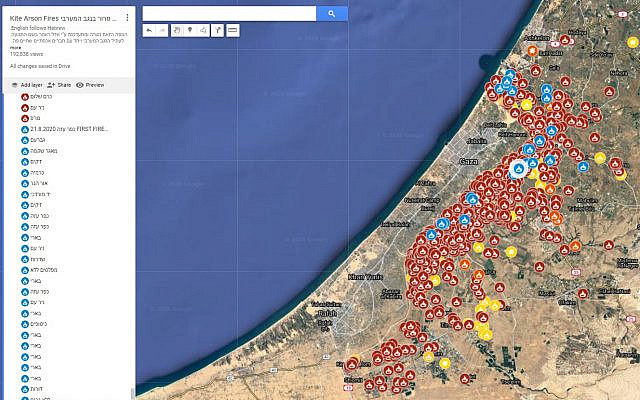 Map of Balloon and Kite Arson Fires
Click on this for the live link to the map: bit.ly/WesternNegevFires

Yesterday I added 29 blue pins to the map. The official numbers are lower than that – officially there were 26 fires due to the fact that some of them are not classified as “new” but rather fires that were put out and then re-ignited from smoldering sparks. But I am counting them, anyway. Because a fire is a fire is a fire, and just because there was not a new balloon that caused the fire, the fact remains that it was caused originally by a balloon carrying an incendiary device sent over with the sole purpose of causing destruction and terror.

On last night’s News, one of the news reporters (Roni Daniel – Channel 12) made 2 comments about the fires down here. One of them I deplore. The other, I agree with.

First of all, he said that the fires are horrible, but that the media engage in exaggeration making it a bigger deal than need be. After all, no lives have been lost due to these fires, and thanks to the responses of our volunteer and professional firefighters, community security teams and the IDF no homes have been destroyed.

And I wouldn’t have been surprised if he had also gone on to say that, in a way, it serves the Hamas propaganda machine. After all, the aim of a terror organization is to instill fear, and the footage of the firefighters at work fighting the blazes can be used to rally and encourage those on the Gazan side to continue with these war crimes. Factually he may be right; but if he, himself, lived here, having to breathe in the smoke like we do, maybe he would shout about it more. Maybe, if while letting his guard down, for some time in his own living room, he were periodically propelled from his chair by a sudden explosion shattering the silence of his small, sleepy desert community, erupting from a grenade above his roof, he would join the front line of the protests against a government that puts the quality of life in his region in Israel lower on the ladder of government priorities. Perhaps if he had to maximize every opportunity to teach his grandchildren that balloons, and pretty objects attached to them, are things they must learn to run away from rather than towards, quite possibly his tune would be a different one. I wonder, if that were the case, if he wouldn’t try – like I do – to make as much noise about this as he could, because that’s the only way things get noticed in this country. Correction: in this world.

There is so much dramatic reality going on around us: global pandemic, the national battle of trying to flatten the curve, a “peace agreement” with the UAE which brings with it questionable super-fighterplane deals, and now a fourth round of elections looming as a real and additional present threat, to name just a few, that it is truly a major challenge to captivate the public’s attention. Yet metaphorically shouting about our situation from the rooftops, is exactly what is needed in order to muster up the required support to convince the politicians in their clear, smoke-free, explosion-free, “Red Alert”-free air in Jerusalem, that our situation down here, is dire and needs to be a top priority. Just take a look at the map, and say it isn’t so. Open a few of the yellow or orange dots, and tell me that this is a logical situation for a sovereign government to continue to allow to go on for so long. Look at the blue dots representing yesterday’s blazes. Consider people-hours it took to deal with each of these fires, the destruction of each to the land it burned and the pollution it caused to the Negev air.

However, after his first comment, Daniel on last night’s News went on to say something which I know to be true: the solution to this predicament in which we live, cannot be solved with military force. It requires a strategic and diplomatic solution. This regional tragedy will not be solved until Gazans’ lives improve enough to enable them to rehabilitate their region, providing them with a horizon of hope. He said something which I say all the time: desperate neighbors are dangerous neighbors.

As I wrote this on Friday night, I planned to sleep in my saferoom. I did not know what the night ahead had in store for us, because in this vicious cycle of escalation of violence, where the response to balloons are IDF retaliations, and the Hamas’ current response is the promise that the reaction to each IDF retaliation will be more rocket fire (and, in fact, at the very moment of writing this last night, at 21:27 alarms went off in Sderot, Ibim and Nir Am).

A friend of mine, originally from Gaza, just sent me a message: “Be safe, war is coming”.

Sadly, we can all see the writing on the wall, it’s engraved there for all to see, in fire and ash. But who is bothering to read it? And now, back to the map, for today’s fires have already begun.

To get more updates about what life is like on the border with the Gaza Strip, join our Facebook group: Life on the Border