Rosh Hashana is the one time a year that our prayers go universal. All year long we think of Israel, the people, their destiny, faithfulness and wellbeing. On Rosh Hashana God is at the center, as we think of His sovereignty and kingdom. The focus on God as king as the central theme of Rosh Hashana (often obscured by an ill-placed emphasis on judgement day) means we also think of all of humanity. We seek to proclaim God as the king of all creation and all of humanity. With this emphasis, we also discover the secret to universal brotherhood and coming together to do God’s will as one. “That they may all form one band, to do thy will with a perfect heart” (Rosh Hashana prayers). 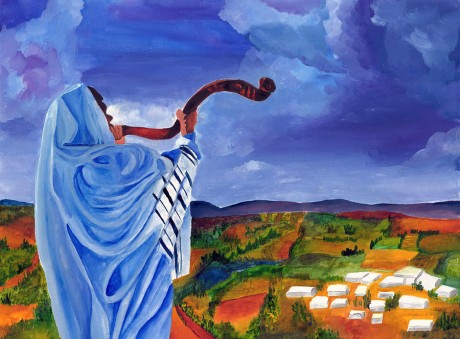 Rosh Hashana is the time we pray for all humanity.

Rosh Hashana, then, is the time we pray for everyone, for all peoples, nations, individuals. It is a time when we seek to discern God’s will for all humanity, a united humanity, that shares God’s knowledge and translates it into compassionate action. In this spirit, I would like to share a recent statement issued by the Elijah Board of World Religious Leaders. The group gives voice to the perspectives of five major faith traditions, represented by high level religious leadership. The group includes the Dalai Lama, Cardinals and Patriarchs, leading Imams globally, as well as heads of important Hindu, Buddhist and Sikh faith communities. (for a list of members of the Elijah Board of Religious Leaders click here) It includes Rabbis Jonathan Sacks, Eliyahu Bakshi Doron, Shear Yashuv Cohen, Michael Melchior, David Rosen, Renee Sirat and many other noted rabbis , representing different localities and streams in Judaism. (for a list of Jewish leaders click here). The Elijah Board of World Religious Leaders has just issued its most recent statement addressing the recent immigrant crisis. The statement integrates wisdom perspectives of the different traditions and urges hospitality, prayer and the dignity of the human person as religious imperatives, regardless of political and national circumstances. Issuing this statement on the eve of Rosh Hashana has special power for the Jewish reader. It evokes the memory of our own vulnerability, always in need of God’s protection. It reminds us of the dignity of the human person, made in the image of God (on Rosh Hashana, which according to rabbinic tradition is the date of man’s creation). It affirms the deeper interconnectedness of all beings as the basis for compassionate action, which may well be considered as the core message of Rosh Hashana. And it constitutes a call to pray for the wellbeing of all in distress, which lies at the heart of the practice of Rosh Hashana.

Here is the statement of the Elijah Board of World Religious Leaders on the immigrant crisis:

Statement on the Refugee Crisis

The Elijah Board of World Religious Leaders, September 2015.

The past few weeks have brought to global attention the crisis of refugees, seeking shelter and a better life, following war, instability, suffering and poverty in their home countries in Africa and the Middle East. The refugee crisis poses fundamental challenges to governments and agencies, seeking to address this humanitarian crisis.

As leaders of all faith traditions, we would like to recall the following spiritual principles as guidelines that should inform the actions, decisions and attitudes of governments and of individuals worldwide:

Members of the Elijah Board of World Religious Leaders

About the Author
Alon Goshen-Gottstein is the founder and director of the Elijah Interfaith Institute. He is acknowledged as one of the world’s leading figures in interreligious dialogue, specializing in bridging the theological and academic dimension with a variety of practical initiatives, especially involving world religious leadership.
Related Topics
Related Posts
Alon Goshen-Gottstein
Comments