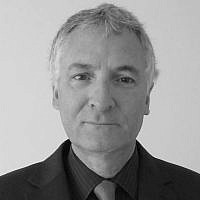 The Blogs
Jeffrey Simon
Apply for a Blog
Please note that the posts on The Blogs are contributed by third parties. The opinions, facts and any media content in them are presented solely by the authors, and neither The Times of Israel nor its partners assume any responsibility for them. Please contact us in case of abuse. In case of abuse,
Report this post.

I understand that chametz is any of five grains (wheat, barley, oats, rye, spelt) that have come into contact with water and been allowed to ferment (for 18 minutes), for example, beer or bread. Using this simple definition as my guide, I buy matzos and bake my own non-grain cakes and biscuits, but everything else I consume on Pesach is no different from the rest of the year: potatoes, eggs, fish, fruit, vegetables, tea, coffee, juice, cheese, butter, milk, etc. Certain sections of the Jewish church may not condone my approach, but I’m comfortable with that.

Extricating myself from Paschal excesses and eccentricities (this is, after all, the festival of liberation), being on holiday over Pesach is something that this gentleman relishes, often finding it to be unexpectedly spiritually uplifting. Such an experience was to be found aboard the elegant cruise ship Prinsendam as she made her way across the Atlantic from Fort Lauderdale to Barcelona in the spring of 2018.

Holland America ensures that grand voyages have religious clerics amongst its passengers, including a rabbi, and I particularly looked forward to Seder night on board. Thus far the cruise had been wonderful, making calls in the Caribbean, Cape Verde, West Africa, and now, on Erev Pesach, we had reached our first port of call in the Canary Islands: Santa Cruz, the main town on the island of La Palma in the Canaries, on a cool and cloudy day.

Whilst exploring the town’s alleyways with pretty, wooden balconies draped with blood-red cloth I became aware of the insistent sounds of the beating of drums and soon found myself amongst silent crowds lining the route as the Good Friday noonday procession solemnly wended its way along the main street of Calle o’Daly and past the cathedral. At the head of the procession marched some of the faithful in white robes, blood-red cloaks and blood-red hoods embroidered with the shield of the brotherhood, feet bound by chains and carrying incense burners. Behind, carrying the bier atop which is Christ crucified, were more of the faithful in white robes and green hoods embroidered with a blood-red cross. In Latin, Greek and Hebrew a sign proclaimed, “Jesus the Nazarene, King of the Jews.” Behind them, a marching band of men and children attired in navy and blood-red played a death march with trumpets and drums. It was a new and unsettling experience for this Jewish traveler, but one I did not regret witnessing.

Back on board my floating county house hotel, there’s a sign outside the restaurant opposite the Lido Buffet which says “Private Party”. Tonight I’ve been excused dancing and hosting duties in order to join perhaps 100 people attending the Seder which is open to all, the faithful and the curious. The restaurant has been beautifully decorated with flowers and every table is laid with a white tablecloth set with napkins, a Seder plate, bottles of wine, boxes of matzo, and a menu tied with a navy ribbon by every place setting. The menu reads: The Seder Service Ceremonial Plate, Gefilte Fish with Horse Radish Sauce, Chicken Broth with Matzo Balls, Roasted Kosher Chicken – Sweet Potato and Carrot Tzimmes, Asparagus with Lemon, Assorted Fresh Fruits with Mixed Nuts, and Coffee or Tea with Macaroons. All the food and wine has been brought on board specially and the ceremony, wonderfully led by Rabbi Starr in Hebrew and English, lasts three hours, with stories of the flight from Egypt, traditional food, wine and songs, and good conversation all making for an extremely enjoyable and spiritually rewarding occasion. My table of eight includes the Natural History speaker and his daughter from Toronto who are fascinated with the evening’s rituals and enter into the spirit of the occasion by asking many more than just four questions.

And why was this night different from all other nights? Because I got to experience the familiar anew, through the wonderment of others, which refreshed my soul and propelled me to sail further through life’s uncharted waters.

About the Author
Jeffrey Simon comes from a dynastic family of rabbis on his mother's side (from Pressburg/Bratislava) and escapees from the Russian Revolution on his father's side. By comparison, his middle-class upbringing in England was more prosaic. He currently lives in a seaside town, home to both the famed Royal Lytham and St. Annes Golf Club (one of the courses on the Open Championship rota) and to a small but long-established Jewish community with its own rabbi. His passion is travel which enables him to explore Jewish communities across the world, be it in Auckland, Buenos Aires or Cochin.
Related Topics
Related Posts
Comments