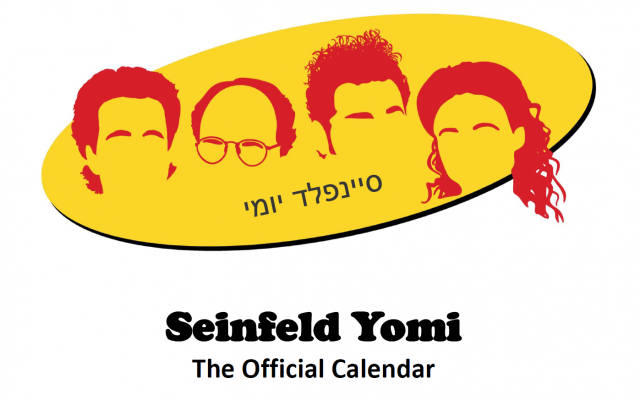 Are there degrees of coincidence?

Is it permissible to parallel park headfirst?

Is it poor hygiene to “double dip” a chip?

How long must you keep a greeting card before you can throw it out?

Why does Jerry’s new girlfriend wear the exact same dress on every date?

Is it appropriate to say “God bless you” to a woman who sneezes if her husband does not?

If you named a kid Rasputin do you think that would have a negative effect on his life?

Did they have roommates in the middle ages?

Who leaves a country packed with ponies to come to a non-pony country?

Why do these stories seem to be little more than a list of things in a messy apartment, which may or may not contain a chicken?

Like the great rabbis of ancient Babylon, the Seinfeld gang spend their days engaging in argument and debate. Seinfeld is the Jewish Talmud of a new generation.

And in the spirit of the Daf Yomi program (in which participants all read the same page of of Talmud a day, one blatt per day), I created a Facebook group called “Seinfeld Yomi” in which we watch one Seinfeld episode a day in order. We even have an official calendar! We are currently on season 3 and we won’t finish until April 20, which is coincidentally Hitler’s birthday (no comment). And then, tradition dictates, we will move on to Curb Your Enthusiasm.

And we are always looking for new recruits! So come and join the debates at Seinfeld Yomi!

Below is a sampling of what the Sages had to say about one of the more famous Seinfeld episodes, “The Pen”

Shimon Bar Yochai: Let’s settle up for last night’s Chinese food, and remember nobody needs to know we had kung pao when it wasn’t Christmas.

Rabbi Tarfon: Hey what kind of pen is that?

Shimon Bar Yochai: This pen? This is the pen The Lord used to inscribe the Ten Commandments on top of Mount Sinai. He then gifted it to Moses before telling him his people would wander in the scorching desert heat for 40 years and he would die amidst the desolation of Moab before reaching the Promised Land.

Jose the Galilean: Still a nice gesture. HaShem could be vindictive, but he was never cheap with the gifting. How did you get it?

Shimon Bar Yochai: It was passed down to Joshua and then the Prophets and then the Pharisees eventually finding its way to Hillel the Elder and then me.  I used it to write our sacred Zohar; The Fiery Chariot of Elijah burned through my nostrils as I etched the Lord’s mystical incantations onto sacred parchment. Now I use it to highlight the menu from “Yavneh Oriental Express”

Rabbi Akivah: You know I oftentimes try to write my notes while sitting in the shvitz – the steam clears the fog from my goyishe kop – but the heat always melts my pen. I’d love to get a pen like that.

Shimon Bar Yochai: Do me a personal favor and take the pen.

Shimon Bar Yochai: Come on, Moses would be down with it, take the pen.

Rabbi Akivah: OK, I’ll take it! Now allow me to write the check for dinner using the pen!

Shimon Bar Yochai: Someone had a Maccabee Lager.

Shimon Bar Yochai: OK so let’s make it 20 Dinars even.

This is the first I am hearing of this pen, said Rav Huna, convening the emergency meeting.

What do you suppose happened to it, asked Rav Sheshet?

Maybe it was stolen along with the Ark of the Covenant, suggested Resh Lakish. We need to form an expedition.

Impossible, interjected Rav Kahana. Indiana Jones would have found it in the Canyon of the Crescent Moon.

No that was the Holy Grail, interjected Rabba. FFS please get your filmography straight.

And we do not talk about Yoshke the Nazarene at the academy, admonished Rav Huna. He’s been blacklisted, like Manya the “immigrant” horse thief.

Why? Ben Zakkai offered it to him, Akivah never asked for it. All he said was he liked the pen, retorted Rav Pappa. And Akivah had such brilliant thoughts while in the shvitz:

-“A fence to wisdom is silence.” I bet you he wrote that with the pen.

-“The paper burns, but the words fly away.” Again, with the pen in the shvitz.

I don’t understand what any of those sayings even mean, sheepishly said Hamnuna.

Nobody does, added Shimon Ben Pazi.

I just had an alarming thought, said Resh Lakish. What if Akivah gave the pen to Bari Weiss during the Bar Kochbah revolt? They were shvitzing up the sukkah together, there was all this lulav shaking and etrog fondling going on. As Rabbi Meir says, “Whoever gives a virgin less than 200 dinar, or a widow less than a maneh, this is [considered] unchaste intercourse.” (Mishnah Ketubot 5:1)

This will be a disaster, lamented Rav Huna. If word gets out, we will be accused of Zionist colonialism and of plundering the treasures of the Palestinians.

What is a Palestinian? Asked Shimon Ben Pazi.

My sources tell me you will need to wait and look that up in about 1600 years, said Mar Zutra the Librarian.