On Rosh Chodesh Sivan, 5768 (June 4, 2008), my oldest grandchild, Ezra Simon Goldberg, was born in Toronto to my daughter Raquel and her husband, Jason. Sharon and I were in Teaneck, ecstatic beyond words, though knowing that we wouldn’t be able to be in Toronto and see him in the flesh (okay, see them) until the brit milah, eight days later.

What to do? Well, I did what any other grandfather with a new grandson would do; I took out the Encyclopedia Judaica Index volume and checked the date of his bar mitzvah. (You mean, that’s not what you would have done?)

Problem. I learned that in 2021 his actual bar mitzvah day would be a Wednesday (okay), Shabbat would be parshat Bamidbar (so far so good), but Shavuot would start the following Sunday night, just 24 hours after Shabbat ended (uh-oh). What would out-of-town bar mitzvah guests do? Would they be able to return home in time for the chag? And if not, could Raquel and Jason possibly put them up?

My Toronto kids were, as you might imagine, underwhelmed with my concerns. They were, understandably, more involved in preparing for a brit milah that would take place in a few short days rather than a bar mitzvah that was years off.

And that’s where we left things.

Fast forward 11 years. Raquel and Jason, at long last and in a timelier manner, turned their attention to bar mitzvah planning, focused on the Shavuot problem, and finally understood Grandpa’s wisdom. (Well, they might not have phrased it that way, but I’m the one writing this column.) And they solved it by announcing that they were moving the Shabbat bar mitzvah celebration to the US Memorial Day weekend occurring two weeks later, which would also give American relatives more breathing room to travel to and from Canada.

Man tracht und Gott lacht; man proposes and God disposes. A pandemic engulfed the world, and although by the time of the scheduled bar mitzvah the United States had begun to open up, Canada had closed down even tighter by still requiring a mandatory 14-day quarantine of the few out-of-country travelers allowed in, whether or not vaccinated. (See “Notes from a Quarantine.”) Even worse, Ontario imposed a harsh lockdown and strict 10-person limit on all religious services.

But a bar mitzvah comes only once in a young man’s life, pandemic or not. Indeed, it’s more than just a young man’s life. In an email exchange I had with a good friend about the bar mitzvah, Giti wrote “mazal tov; a great rite of passage.” I responded “for Ezra or for us?” and she replied “I actually meant you!” How true. We think of rites of passage as things that happen to the star(s) of the show — the bat/bar mitzvah girl/boy, the graduate, the bride and groom. But it’s broader than that. Our youngest daughter’s wedding (see, “Ani Ledodi V’dodi Li”) and our oldest grandson’s bar mitzvah are our rites of passage as well, and they too come but once in our lives.

Raquel and Jason therefore arranged a bar mitzvah celebration, mainly for Ezra, but touching the rest of us too, which outdid the Bard by one; that is, a celebration in six acts.

Act One — Hanachat Tefillin. As tradition dictates, Ezra first donned tefillin 30 days before his actual bar mitzvah. But because of the lockdown, neither he nor anyone else in the family could attend a live service that morning. Rather, they Zoomed into the morning service of their shul, Shaarei Shomayim, as did Ezra’s Toronto and Teaneck grandparents and other family members in at least two countries.

The tefillin were a gift from me and Sharon. We initially had intended to buy them in Israel, but deciding against that for pandemic-related reasons, we purchased them from our local Teaneck sofer, Rabbi Abraham Teicher. Not only are they beautiful, but they came with a bonus — a session where Rabbi Teicher first showed Ezra (over Zoom) and us (in the shop) all the components of his tefillin, and then put them together and sewed them up while clearly explaining and demonstrating every step in the process. I’ve been wearing tefillin for more than 60 years and this was all new to me. I hope Ezra was as fascinated as I was.

Act Two — Rosh Chodesh Sivan. Since this was his actual bar mitzvah day, Ezra finally was able to be one of the 10 males over the age of 13 (I’m working hard not to use the word adult) who can be counted in a minyan. So he, Jason, and Jason’s father, Eric, were given three spots in Shaarei Shomayim’s morning minyan, with Eric leading shacharit, Ezra layning the special Rosh Chodesh Torah reading and receiving his first aliyah, Jason leading musaf, and Ezra’s mother, sisters, and local grandmother watching from nearby. All other family members, this time from three countries, Zoomed in.

Act Three — Thursday Layning and Speeches. Two weeks later, immediate family and a few very close friends — including some of Ezra’s friends who already had turned bar mitzvah and could therefore be counted in a minyan — gathered in nearby Congregation Shaarei Tefillah for the more formal part of the bar mitzvah celebration. In an incredible act of generosity and an amazing demonstration of communal affinity, that congregation and its leadership (a special thank you to Rabbi Rafi Lipner) gave us their sanctuary — which was better suited to Ontario’s Kafkaesque rules than Shaarei Shomayin’s — in which to hold this service. (They also gave us the sanctuary for Shabbat services — see Act Five.)

Being in shul and not on Zoom, we were all dressed in Shabbat finery as Ezra not only layned again (this time the beginning of his bar mitzvah parsha), but also led shacharit. The service was followed by a program, magnificently emceed by 9-year-old Aviva, which included speeches delivered live by Raquel, Jason, and Ezra, a delicious welcome by 6-year-old Liora, and personal Zoom addresses to Ezra by two of Shaarei Shomayim’s rabbis — R. Chaim Strauchler (soon to be my rabbi in Teaneck) and R. Elliot Diamond. Many friends (including close friends of grandparents) and relatives also attended over Zoom.

All those attending live left with yummy breakfast boxes, the family took some photos, and then it was home for some rest and relaxation. 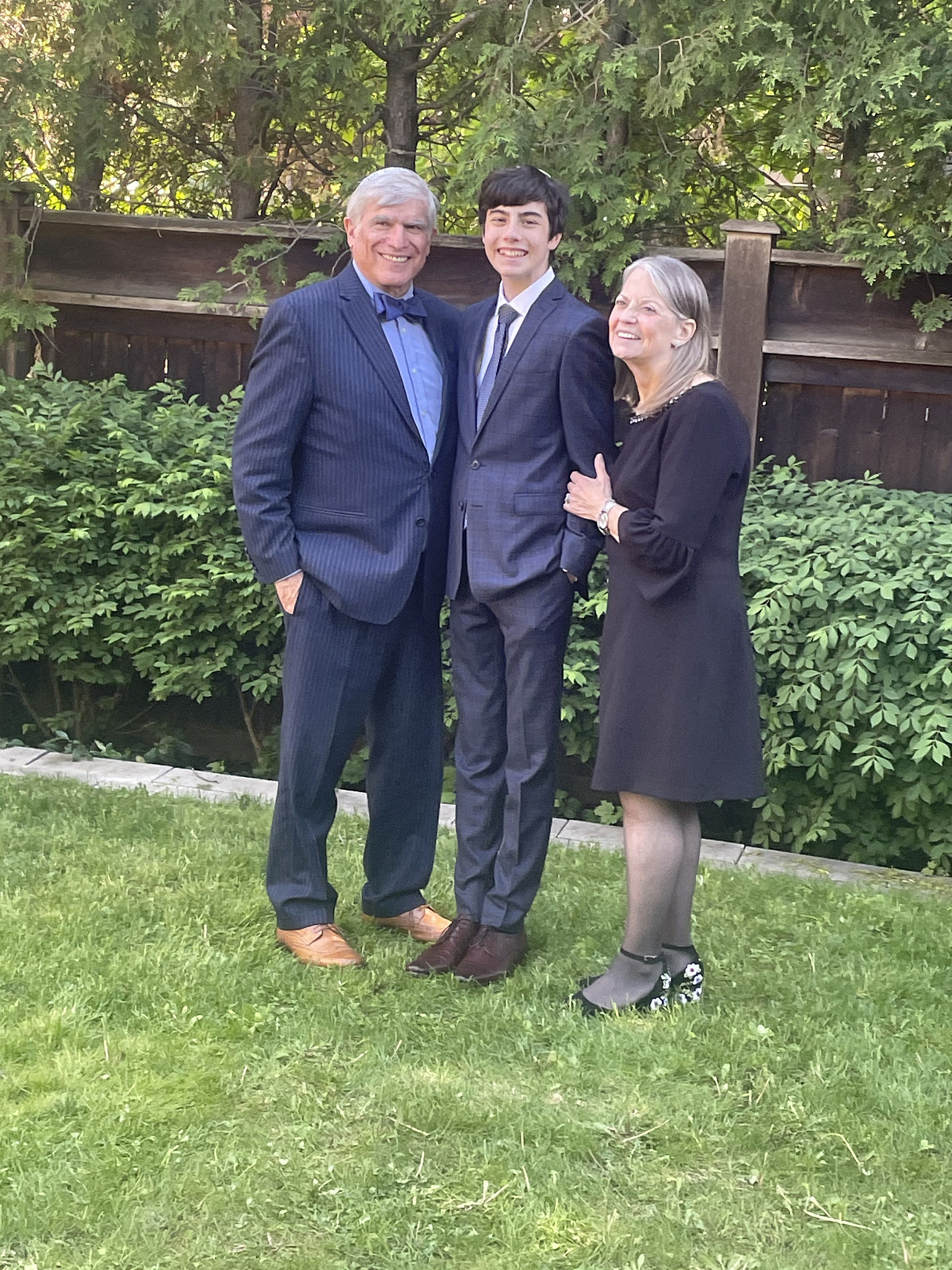 Act Four — Friday Kiddush Boxes. With no possibility of guests coming to a kiddush, the kiddush had to go to the guests. Raquel, Jason, and Ezra therefore spent a large part of Friday morning and early afternoon delivering tasty catered kiddush boxes to more than 30 homes of nearby friends — in a dreary rain (and even some snow! Remember, it’s Canada). They had not seen some friends in over a year, so catching up slowed things down. Well worth it, I was told, though they came home dripping. And the deliveries turned out to be a two-way street, with candy platters, flowers, molded chocolate, and cakes dropped off by friends and family filling up the dining room table.

Act Five — Shabbat. Once again, immediate family and close friends — yet a different group of 13-year-old boys joined us this time — gathered in Shaarei Tefillah for shacharit led by Jason, followed by Ezra magnificently layning the entire parsha of Beha’alotcha and its haftorah and then leading musaf. (Not surprising; Ezra has been a shul person since the age of 3.) Ezra’s uncle Jon gave the drasha, and then home for a very small, backyard family meal with some speeches and, my specialty, grammen about Ezra.

Act Six — Sunday Drive-by. Many of Ezra’s friends, other family friends, and relatives drove by at designated hours and got out of their cars for mazal tovs, chats, and swag bags.

This was not the bar mitzvah Ezra imagined before the world changed in March, 2020, nor the one foreseen by Raquel and Jason or, indeed, any of us who have been looking forward to this event since 2008. But it was the way it had to be in 2021, and as adults — and this time I include Ezra in that category — we know the necessity of making the best of what life throws our way, while still creating warm and lasting memories, even if it’s not exactly what we anticipated.

Raquel, Jason, and especially Ezra certainly made the best of this celebration in six acts — a simcha that was very much ado about something. 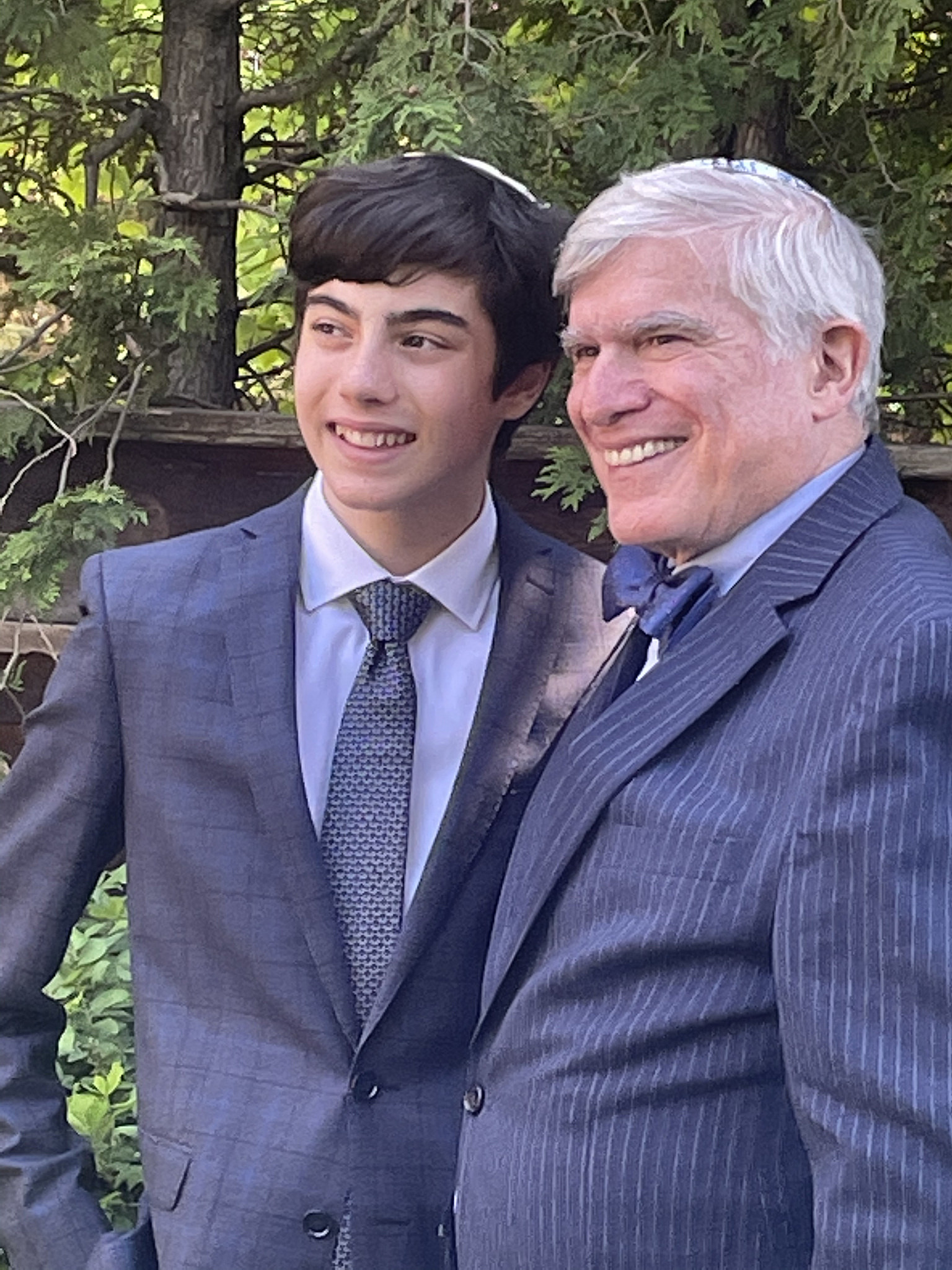 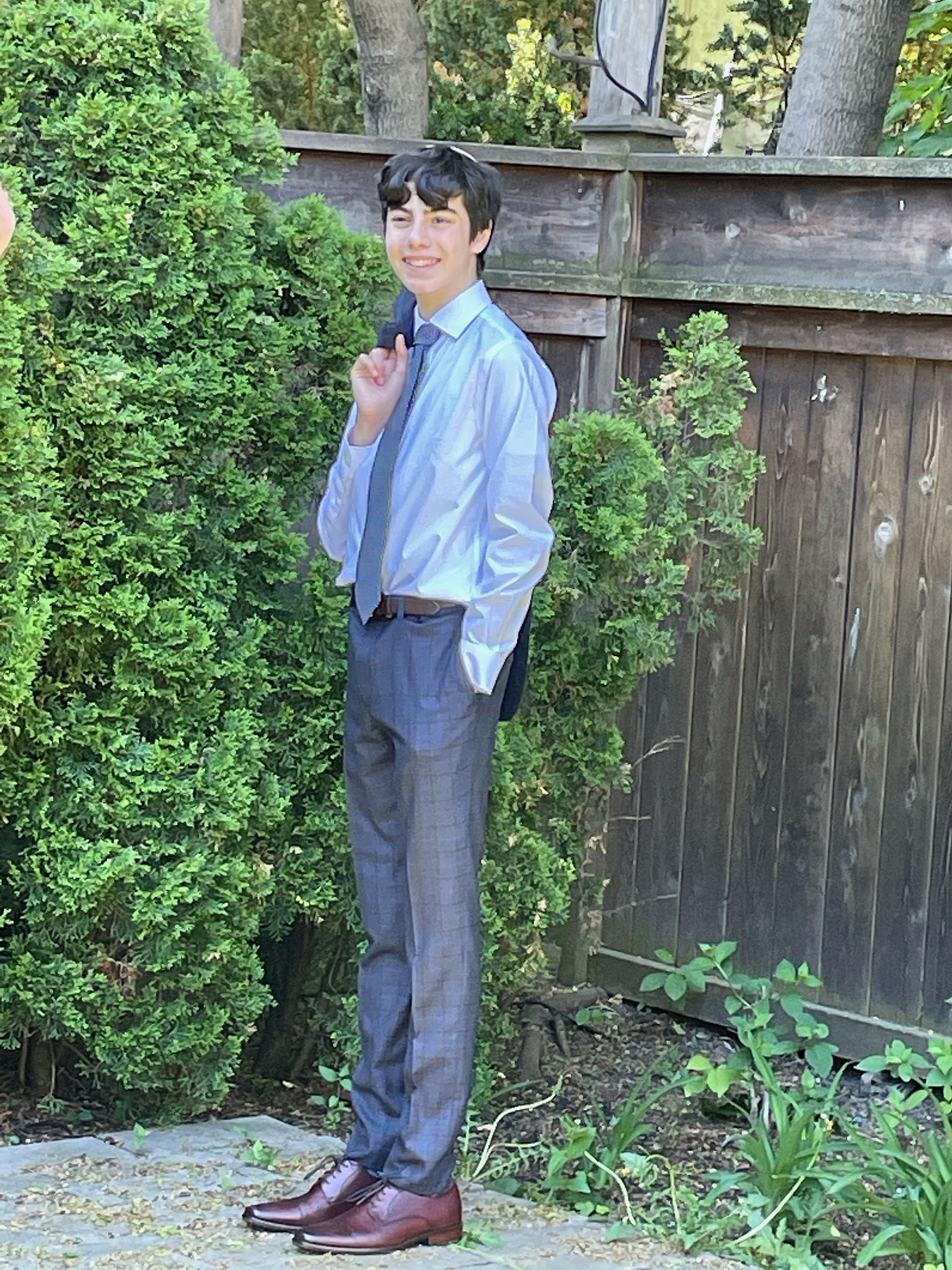 Healing the world, one network at a time
Lois Goldrich