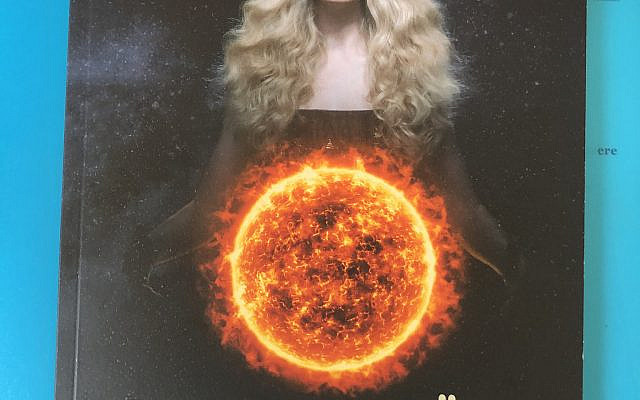 A photo by Dorothea Shefer-Vanson of programme cover

A performance of ‘The Magic Flute’ in the evening led us to spend a day in Tel Aviv, enjoying the view of the sea from the restaurant on the sun-drenched promenade, partaking of the aesthetic delights on offer at the Tel Aviv Museum (including the delicious cakes in the coffee-shop there) and ending with a highly innovative performance of the opera.

That opera (or ‘Singspiel’ as it was originally called – a kind of hybrid between a musical and an opera) is one of the most popular and most often performed all over the world. Hence, it is very difficult to put on a production that is entirely fresh and novel. As a friend involved in the business of producing opera told us, they’re heartily sick of that particular opera. Luckily, we’re not in the business, so are still able to enjoy it. It’s true, everyone knows the music and the rather convoluted plot, but l haven’t yet tired of Mozart’s music and inventiveness.

The stage of the Tel Aviv Opera was occupied by a huge screen upon which animated patterns and images of various kinds were projected, while live singers either moved around at the front of the stage or seemed to be embedded at different points of the screen as they sang and emoted in accordance with the music and the plot. Having a live orchestra in the pit gave the occasion the sense of being at a ‘normal’ opera performance, with its added dimension of depth and intensity. Incidentally, this and all the other (and additional) performances in Tel Aviv were completely sold out.

The underlying concept of the production was that of the silent films of the 1920s (the name of the company that produced the animated segments on the screen is ‘1927’ – the year the first talking film, ‘The Jazz Singer,’ was shown). The character of Papageno, the hapless bird-catcher, was a clear imitation of Buster Keaton, with his idiosyncratic facial makeup, expressions, attire and general demeanour clearly echoing those of the actor who featured in many outstanding silent films of the 1920s and 1930s. The costumes and gestures of the other characters also echoed those evident in the films of that period.

As with those films, at times the action on the stage was accompanied by an interlude played on a solo piano (but always playing music composed by Mozart, albeit for other works), alongside captions on the screen summarising what would ‘normally’ be lengthy dialogues in German (or Czech, as was the case when we attended a performance in Prague some years ago). The fonts used for the dialogue differed in accordance with whoever was speaking, adding another dimension of humour and interest to what was going on.

The animation incorporated elements of fantasy as well as imaginative depictions of scenes and situations. Thus, Papageno was accompanied by an animation black cat, who turned out to play a (silent) part in the action, constituting another focal point of attention and, yes, you guessed, humour. Every action, thought, emotion or experience conveyed in the music and the narrative also found expression in the animation on the screen, at times in glorious technicolour, at others in stark black and white, introducing cultural elements and associations from a myriad of different (but relevant) contexts, but always imaginative, amusing and thought-provoking.

Elements from comic strips also found their way into the animation on the screen, so from time to time the audience was treated to such expressions as ;’Thwack!’ and “Ka-boom,’ using the fonts associated with those comic strips, to emphasize what was being depicted by the music and the singers.

Altogether, this production created something new and wonderful but still remained faithful to the original vision of Mozart and his lybricist Schikaneder or, as one of the animation team pronounced “What we’ve created is, in effect, a silent film by Wolfgang Amadeus Mozart.”