“I believe with all my faith in the Coming of the Messiah and even though he may tarry, I’ll await him every day”

There’s hardly anything more typically Jewish than the feeling of guilt that lurks just underneath our otherwise confident shell.  Some have attributed that peculiarity to the overbearing influence of protective but also manipulative Jewish mothers.  There might be some truth in that; but I think it’s more about the inevitable gap between our exacting self-expectations (‘light onto the nations, etc.’) and the reality of our all-too-human imperfection.  Whenever something happens that reminds us of that gap, a wave of guilt washes over us; and we reflexively pour a ton of ashes over our lowered heads. 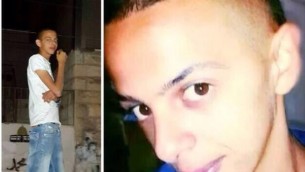 That trait was glaringly visible yesterday, as Jews in Israel and around the world learned of the horrible murder of Mohammed Abu Khdair.  The partially-burned body of that Jerusalemite teenager was found in the woodlands on the outskirts of the city.  Apparently, he was last seen being abducted and forced into a car.

In the youngster’s neighbourhood of Shoafat, the rumour that this murder had been perpetrated by vengeful Jews grew like fire in a field of dry grass – and the ‘inevitable’ (?) result was mass rioting.  With their knee-jerk propensity to assume the worst about Israel, most media outlets simply reproduced the rumour, with zero attempts to verify it.  So far, nothing really surprising.

What is interesting, however, is that the pouring of ashes over Israel’s collective head started before the police – busy as it was with controlling the riot – even had a chance to look at the evidence.  Not just the Israeli and Jewish media, not just Israeli and Diaspora leaders (from Netanyahu and Livni to the Board of Deputies of British Jews), but a huge proportion of Israeli and worldwide Jewry began to wallow in a humongous dollop of Jewish guilt.  This stood, of course, in stark contrast to the Palestinian Arab population, the bulk of which still denies that any Israeli teenager has been killed, let alone being killed by Palestinians.  In the words of Time’s Correspondent Karl Vick (hardly a friend of Israel!):

Many if not most Palestinians refuse to say that the three Israeli teens were abducted at all. Their disappearance is widely regarded as an excuse to force apart the newly minted unity government supported by both Hamas and Abbas’ secular Fatah party…

I’m not suggesting for a moment that Jews should adopt the Arabs’ self-harming habit of constantly blaming others for their own shortcomings.  No, not at all; prodding introspection and harsh self-criticism are invaluable tools for self-improvement and progress; let’s embrace them.  But should we not give facts a fair chance of surfacing, before we pronounce a ‘guilty’ verdict upon ourselves?

One thing is clear and no reasonable individual will disagree: whoever murdered Muhammed Abu Khdair – whether Jew, Arab or Martian – is an inhuman beast and should spend the rest of his miserable life rotting in jail. 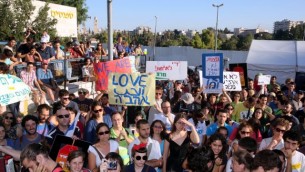 Anti-violence and anti-extremism demonstration in Jerusalem

And there’s a second thing – just as clear, irrespective of whether a Jew has committed the disgusting murder or not: the calls for ‘revenge’ that were heard from some extreme fringes of the Israeli society need to be condemned and shamed into silence by the righteous roar of the sane majority.  And they are.  I am told that some 200 hooligans who mistakenly call themselves Jews ‘demonstrated’ with shouts of ‘Death to the Arabs’.  Some may say that 200 is a small number in a nation of 8 million that had just experienced a traumatic loss; it’s certainly much less than the number of rioters in Shoafat.  But that does not matter: those 200 are 200 too many; it’s good that many of them have been arrested; it’s even better that an anti-violence and anti-extremism demonstration was organised the very next day.

I read somewhere that Palestinian Authority President Mahmoud Abbas has called for “strongest punishment against the murderers” of Muhammed Abu Khdair.  Well, Mr. Abbas, here is something we can agree upon: let us make a pact today – you, the Arab and I, the Jew – that the murderers of Muhammed, whoever they are, should rot in prison, just like the murderers of Eyal, Gil-ad and Naftali; and while we are at it, let us also resolve that neither Arab nor Jew shall ever demand the release of these ‘prisoners’ from their well-deserved captivity!

But let me return to the issue of guilt.  Is it possible that the innocent Arab kid was murdered by Jewish terrorists?  Unfortunately, it’s possible.  But it is by no means a certitude, or indeed an obvious likelihood.

Seeing the outpouring of grief and anger when Israel learned of the murder of Eyal, Gil-ad and Naftali, it is easy to jump to conclusions and flights of fancy.  Let us remember, however, that this is hardly the first time when innocent Jews were murdered by Palestinian terrorists.  Similar murders – and worse – have been perpetrated many times before.  Indeed, during the wave of terrorism that some misname ‘the Second Intifada’, around 1,000 Israelis were murdered; many of them were children.  In just one horrendous attack (the Dolphinarium Discotheque bombing), 21 Israeli teenagers were killed; no less than 132 were wounded.  Then, too, the nation grieved; there was huge anger, recrimination and some fringe calls for ‘retribution’.  But the Jewish population did not seek revenge on innocent people.  Why would that happen now?

And why in Jerusalem?  The three Israeli teenagers were murdered in the environs of Hebron; they were murdered by Palestinian terrorists from the area, not by Jerusalemite Arabs.  Even if the despicable thought of ‘revenge’ had found shelter in an evil mind, wouldn’t such mind seek a closer geographic connection between crime and ‘retribution’? 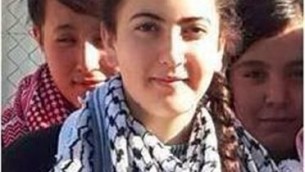 According to the Palestinian news agency Ma’an, 15-years-old Umayma Muhammad Abdul-Rahim Jaradat was stabbed in the neck and chest by a Palestinian man on Tuesday, near Hebron.

Finally, isn’t it possible that, either by careful design or opportunistic exploit, a ‘mere’ criminal (rather than a terrorist) took advantage of the situation to commit a ‘perfect crime’ and try to cover his tracks?  It’s not like non-political crimes do not occur and it’s not like youngsters do not fall victim to ‘mere’ criminals.  Indeed, according to the Palestinian news Agency Ma’an, yesterday in Hebron the Palestinian police arrested a man suspected of stabbing to death a 15-years-old girl; today in Gaza, a Palestinian man was killed and two others wounded in what Ma’an describes as a family feud.

I can see my critics raising a harsh brow: ‘You find it difficult to believe that a Jew committed such murder’, they say; ‘yet you wasted no time in pinning the blame for the murder of Jewish boys on Palestinian terrorists.  Why the difference??’

My fellow Jews, I’m really not against a good, cleansing Jewish guilt trip; but can we wait just a little bit, to give God’s Truth – whatever It is – a chance to emerge into that unforgiving Jerusalem sunlight?  Just a bit of time is all I ask, perhaps a week or too.  I won’t ask you to wait patiently until the time Palestinian Arabs will embark on their own guilt trip; or until the Coming of the Messiah.  Much as I believe with all my faith that both those things will happen – one day.