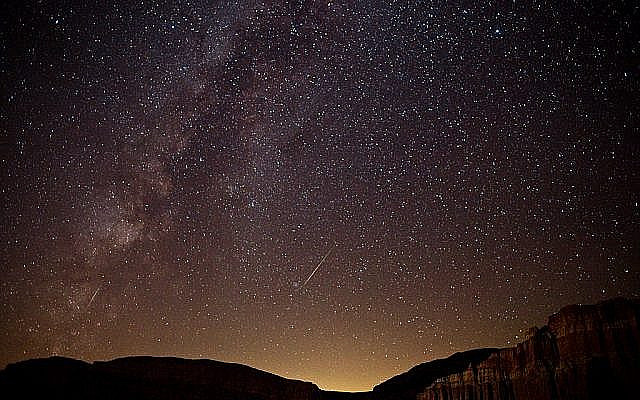 My daughter once had mermaid hair, so exquisitely long and complicated that I even wrote a story about it years ago. 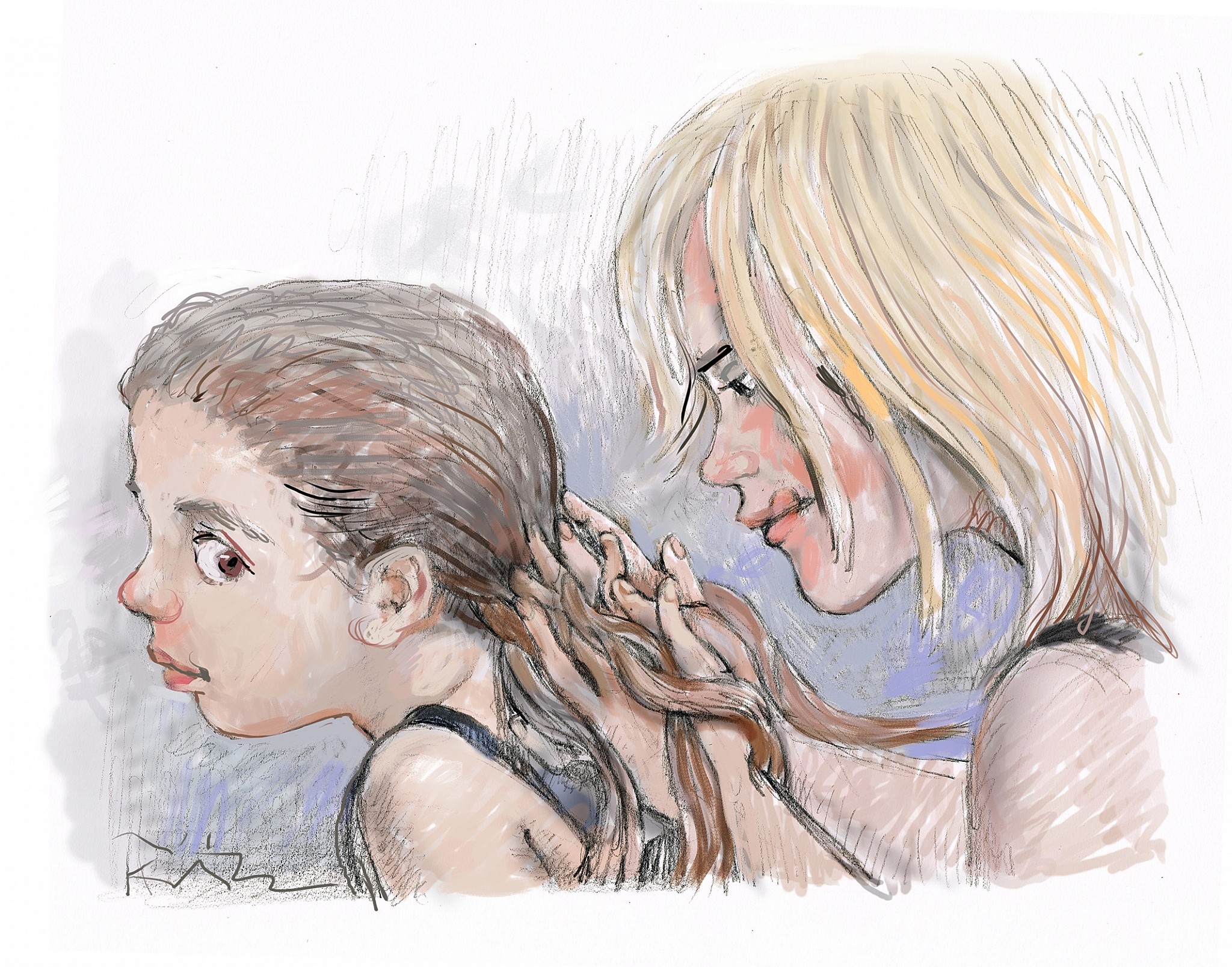 My daughter had mermaid hair
Illustration by Avi Katz

I’ll tell it to you again:

My daughter had mermaid hair – long burnished curls that tangled at the ends, her hair smelled like lavender and salt. We cut it once — just her bangs. But the ends are hers since she was born. My daughter and I are alike in many ways, but our hair is different.

I grew up with short hair — my mom cut it for me when I was too young to remember.

Everything I learned about long hair I learned from playing with Barbies, and even then, at some point, I would take a scissors to them and hack the ends until they looked like punk rock goddesses.

But my daughter’s hair was a fairy tale creature. With attitude.

When she was born, it curled around my fingers – a color I could not name, the softest thing I had ever felt.

When she would wear it long and flowing she looks like a warrior goddess, enchanted princess, hero of her own story. 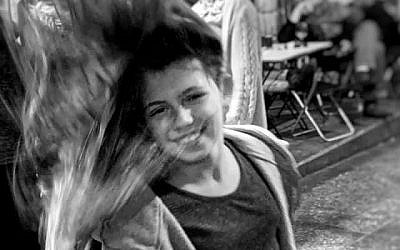 Mostly, she would wear it in a braid.

Every night, after she showered, she’d hand me the brush and ask “Mama, can you braid my hair?”

She’d always do it when I’d be in the middle of something else — dinner, or reading, or just stretched out on the couch like a lazy cat.

I’m a good mother, I’d like to think. But I’m not the kind of mother who knows how to get stains out of shirts or cook a yummy meal without a box, or braid hair.

(I’m the kind of mother who will steal a pirate ship in the middle of the night and sail off to the moon with my kids and be back before sunrise.

I’m the mother who will teach her kids how to climb walls and walk on roofs, how to sing in cisterns, and dance in the fields at sunset barefoot.

But I didn’t not braid hair.)

But, there’s my daughter — her feet firmly rooted to the earth, and her eyes on me:

“Mama, can you braid my hair?”

“In a minute, baby,” and then a minute would stretch to five, and then 10, and then an hour would go by, and she’d ask again “Mama, can you braid my hair.”

“Sweetheart, I’m in the middle of something. Can’t you just do it?”

And yes, she could do it — I’ve seen her do it. I’ve seen how she’d comb out her hair until it glistens, how her fingers would fold each strand over strand like challah. She could braid her own hair.

But she’d stand there, my little Taurus child, stubborn and resolute and her brush in her hand.

And so I did. Night after night, a chore I could do without doing, I’d run the brush through her hair, carefully. Her hair that smelled like lavender and salt, I’d wrap it in my fingers like seaweed, it hung all the way to her back. 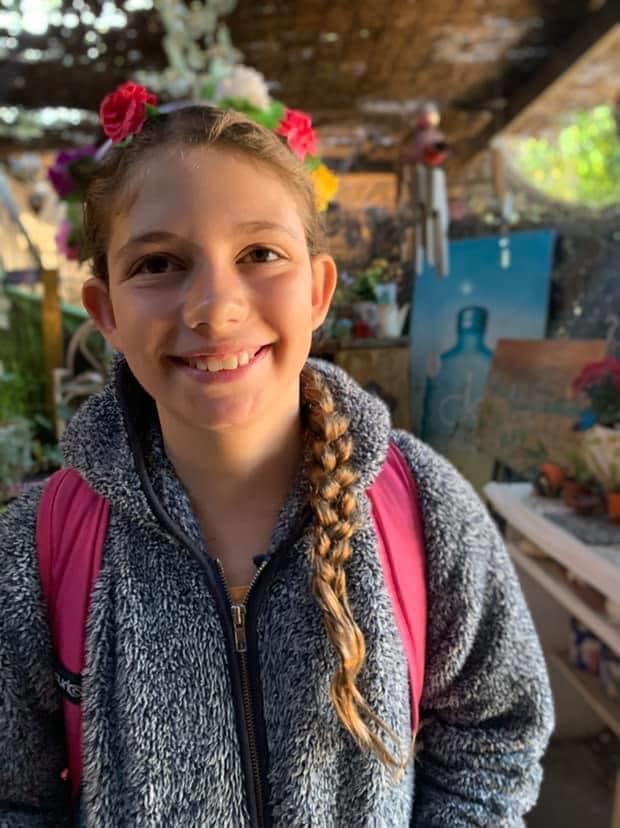 We’d talk about other things, too — about what it’s like to live between worlds, to feel things, to struggle, to never find a space that makes total sense.

This braid became a sacred bridge between our two worlds. We don’t speak the same language – OK, fine, my Hebrew is good enough and her English is good enough, but that space in the middle between the way we see the world is vast.

She sees it too. 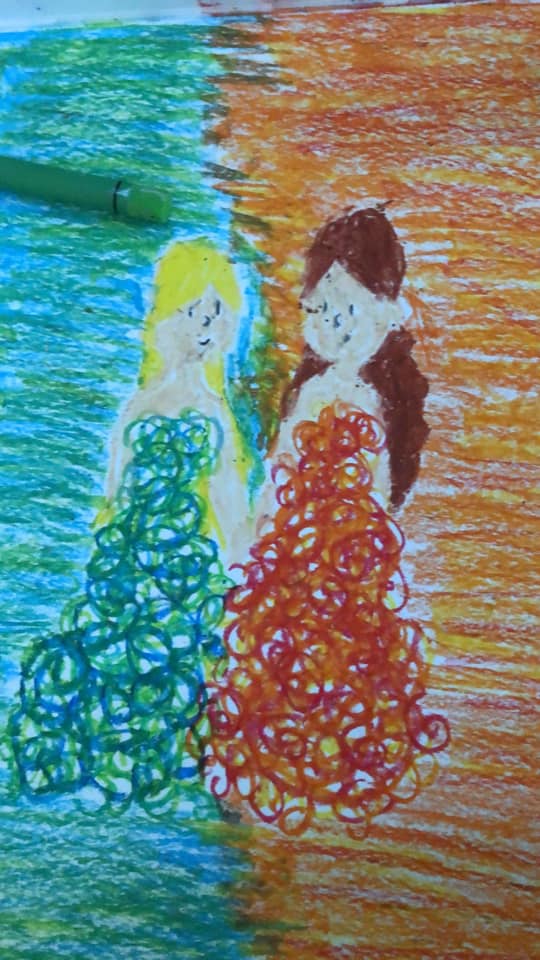 Maybe others of you in this who are immigrants and are raising kids will understand. Or maybe this is a mother daughter thing. Or Both.

But we stand in different worlds, and  the braid connected us as I’d wrap my fingers through her hair, and drew us closer together for those five minutes every night.

I opened them and I felt each of them like a punch to my  stomach, and the wind whooshed out of me.

She was standing there in some hair salon in another world far away from me, her cheeks flushed and her eyes shining, cradling her braid in her two hands, the way I carried her home from the hospital with that same hair we didn’t cut, until that moment when she decided it was time.

But she didn’t tell me.

She went with her step mother.

I know hair is dead by the time it reaches the surface and tumbles down the back. It’s dead already and feels nothing. It doesn’t cry when it’s lopped off.

Still, in the video her step-mother recorded that my daughter sent me with the photos, hearing the scissors slicing through that braid, my daughter gave a little gasp as though she felt it.

And I still feel it – the ache of it, like a phantom limb. And I’m angry in ways I can’t explain. My baby – who isn’t my baby – is changing. And I did too once when I was her age, but I’m feeling all of it and the space between us seems bigger than before, a black, gaping maw of space.

She donated her braid to an organization that makes wigs for kids with cancer.

When I saw her in person a few days later, I told her how beautiful she was, how proud I am — which is true, even though I’m still hurt and angry and feeling at loose ends.

But later that night, when she was getting ready for bed, when I would have been wrapping her hair around my fingers and pulling her close, I said to her “I miss braiding your hair.”

“But you know what makes it OK?” my daughter continued.  “Somewhere, my hair is going to a little girl with cancer who has no hair, and now her mom gets to braid it for her for the first time in a long time just like you braided mine.”

And just like that, I could see the bigger picture, and I understood: My baby girl is growing up,  and that’s OK.  Despite our differences, despite the space between us, I’m dazzled and amazed by her wisdom and by the person she is becoming. And I looked at her in awe – this shimmering being with her new “grownup” haircut —  and the hurt disappeared and the anger too, as her words became a million stars that filled the space between us, and lit the way between where each of us is standing. 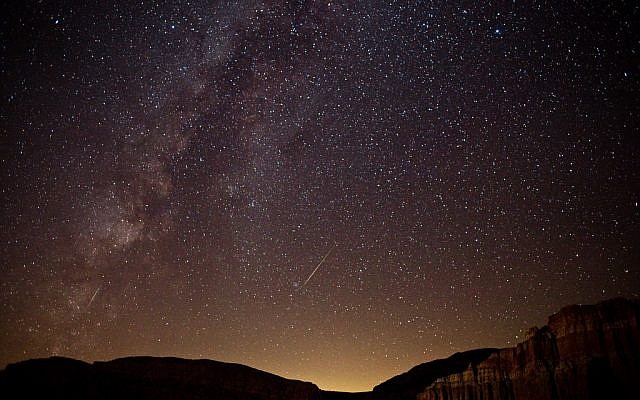 Illustrative: A Perseid meteor streaking across the California sky in 2010 (CC-BY-SA Ian Alexander Norman, Flickr)
About the Author
Sarah Tuttle-Singer, author of Jerusalem Drawn and Quartered and the New Media Editor at Times of Israel, She was raised in Venice Beach, California on Yiddish lullabies and Civil Rights anthems. She now lives in Israel with her two kids where she climbs roofs, explores cisterns, opens secret doors and talks to strangers, and writes stories about people. Sarah also speaks before audiences left, right, and center through the Jewish Speakers Bureau, asking them to wrestle with important questions while celebrating their willingness to do so. She also loves whisky and tacos and chocolate chip cookies and old maps and foreign coins and discovering new ideas from different perspectives. Sarah is a work in progress.
Comments