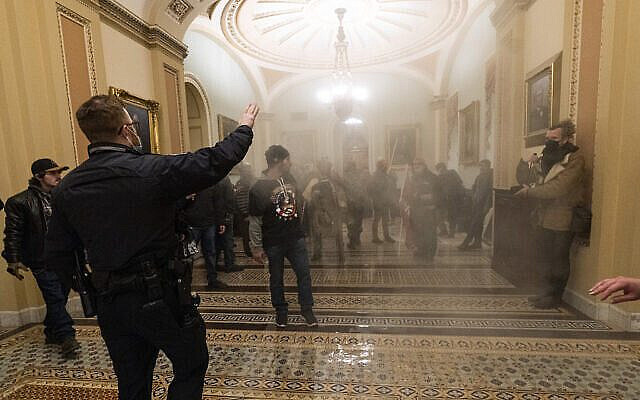 Smoke fills the walkway outside the Senate Chamber as supporters of President Donald Trump are confronted by U.S. Capitol Police officers inside the Capitol, Wednesday, Jan. 6, 2021 in Washington. (AP Photo/Manuel Balce Ceneta)

The outrageous end days of Donald Trump’s presidency, improbably close vote counts and the coming 50-50 Senate all reinforce the sense of two entrenched Americas slugging it out in red-hot cultural warfare.

But there are three Americas. Look closely and you will find progressives on the left, the nativist populists of Trumpland on the right, and centrists in between. Centrists are probably the largest of the groups; one of them is about to become president.

Some are optimistic about the prospects for a national healing offered by the defenestration of Trump and Democrats’ victories in Georgia’s Jan. 5 runoff which gave the party a Senate majority of sorts.

But the US system requires an unattainable Senate supermajority of 60 to get most important things done – a relic of quainter times when the system sought to encourage a bipartisanship that is not longer possible.

In its current state, the United States is failing miserably to address truly burning problems, from the epidemic of gun deaths to toxic inequality to the world’s only student debt disaster. What’s more, it cannot hold elections without Third World levels of dysfunction and distrust.

Much of that has to do with the Republican Party coming off the rails. That is a process that was underway for years but was accelerated by Trump. The outgoing US president has revealed that the population of Americans who are so angry that they want to burn down the house is far higher than was thought. Perhaps a third of Americans are positively seething – over racial diversity, over the ravages of globalization, over technological disruption and over life, the universe and everything.

Over the past several decades, such people have migrated almost entirely to the right – and that makes them a majority of the right. Recognition of that majority is why the Republicans could conceive of running someone as clueless as Sarah Palin for vice president. And fear of that majority is why so much of the Republican establishment has played along, almost until the very end, with Trump’s scandalous efforts to overturn his loss in November. It is why some, like the pitiable Sen. Ted Cruz, still do.

Yet a hardy minority of responsible conservatives — politicians, pundits and ordinary voters — have little in common with this mob.  They have small-government instincts, perhaps, but little revolutionary urge to whip up a fuss, disrespect expertise and science, or spout lies for the pure joy of upsetting the elites.

My reading of what they do and say suggests the following:

So why don’t they openly align with the Democrats?

Well, talk to them and you’ll hear that they don’t want to fling open the borders or “defund” the police. They don’t think riots are a way to let off steam. They don’t think Israel is worse than North Korea. They don’t think gender is a construct, universities should be “safe spaces,” unchosen group identity should determine an individual’s rights, political trends should trump debate, or that a stupid joke or unpopular statement should get a person “cancelled.”

It is the woke who keep them awake.

Much the same thing can be said of the centrist Democrats. Polls show about a third of party supporters fear the progressives. And the disdain and distrust are rather mutual.

Could a reshuffle really happen?

Electoral systems based on winner-take-all districts – and such are the U.S. states for presidential election purposes – create binary landscapes. Third parties become spoilers that risk ruining things for their “side” –as the Greens undid environmentally friendly Al Gore in 2000, as Ross Perot destroyed the elder George Bush in 1992 (setting the Republicans on their course to full berserktitude), and as Teddy Roosevelt split the conservative vote in 1912.

But for this to apply there actually has to be a side.

President Biden will try to please the progressives, but he will have to toe a centrist line with the 50-50 Senate.

They could easily lose patience, and one can imagine ideological progressives breaking free. If that happens while Trump and his backers are still wreaking havoc in the GOP, centrist conservatives would be able to more comfortably ally with the remaining Democrats.

If polls show such a centrist force has significant support this could gather momentum.  Key policies could be forged – on gun control, climate reform, healthcare guarantees, fair taxation and logical immigration policies – that align with America’s silent majority. Perhaps the Equal Rights Amendment might finally be passed.

A reshuffle of the political map might also provide tail-wind for reforming the flawed electoral system that hastened America’s meltdown to begin with. And that would be high time, because a system where a voter in Wyoming is worth 70 in California is tragicomically unfit for the 21th century.