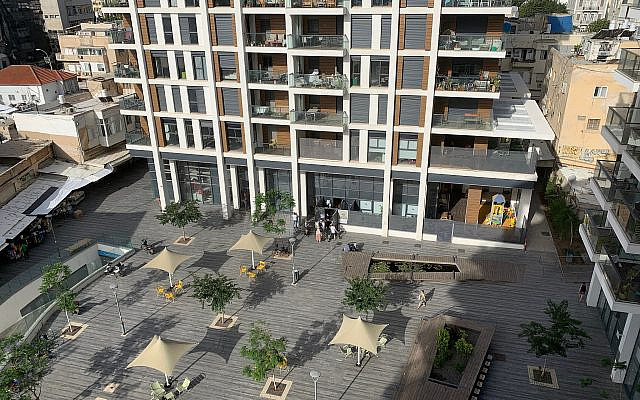 Echoes of the Knesset (photo by Marc Kornblatt)

The votes aren’t in yet, but Israel’s parliament seems close to its first management change in a dozen years. This has me thinking about weeds.

Dirty, painstaking work, pulling weeds is less efficient than spraying them with poison. Yet the more natural, hands-on method has its appeal.

Yair Lapid’s eight-party coalition, as fragile as it may be, shows promise. A coalition that brings together the right-wing Yamina Party and the Islamist Ra’am Party is nothing short of groundbreaking. Such a diverse group might be able to tame some of Israel’s thorniest weeds.

A picture of a smiling Lapid, Ra’am’s Mansour Abbas, and Yamina’s Naftali Bennett sitting together has resonated with me, a newly elected member of my Tel Aviv apartment building’s condo board. Little did I know when I ran for one of the five-volunteer positions that there was a tornado of controversy swirling around me.

Within days of my winning a spot on the board, I discovered that a group of tenants was up in arms about how the recent elections had been conducted; the need for a new management contract, if not a new management company; the kinds of businesses coming into the empty ground-floor retail spaces; how the exercise room had been managed during the pandemic lockdown; the skateboarders wreaking havoc on the insufficiently clean plaza below our two buildings; the overpowering odor of hummus permeating the lobby and lower floors of one building, and the failure of management to communicate in an open and timely manner with tenants about their concerns. Coupled with all that was a divide between owners and renters over their individual rights, and, count them, three court cases that tenants had filed against management, with one of the cases naming the outgoing condo board as a party in its complaint. And now, we have had a management change.

During my first two months, I’ve lost track of the hours I have spent trying to address a few of the above issues, while sowing a few seeds of community spirit. I dream of creating the kind of neighborly place I lived in before I moved from Wisconsin to Tel Aviv in 2019. 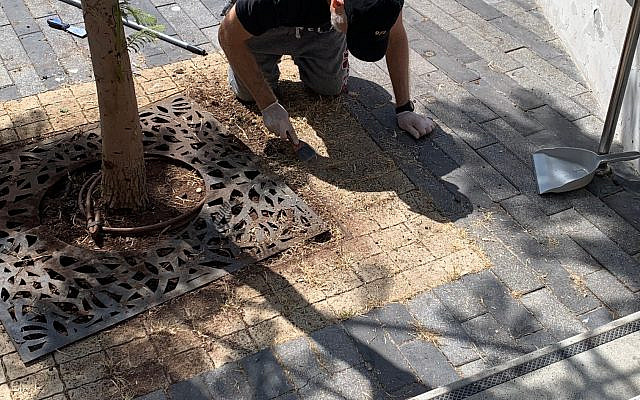 So, in between the condo board trying to settle the tenants’ court cases, and craft a vision statement that shows we are doing our best to improve services for all, I’m pulling weeds.

This past Friday morning, for the second week in a row, I got down on my knees in our plaza to yank intruders overlooked by our maintenance staff and the city’s cleaning crew. It was a symbolic gesture, one designed to show residents that they have vaad members ready to get down in the dirt. I say members, because one of my board colleagues joined me, again, and this time we went beyond what we did last week. We pulled up metal grates protecting the trees to get at the weeds’ roots. 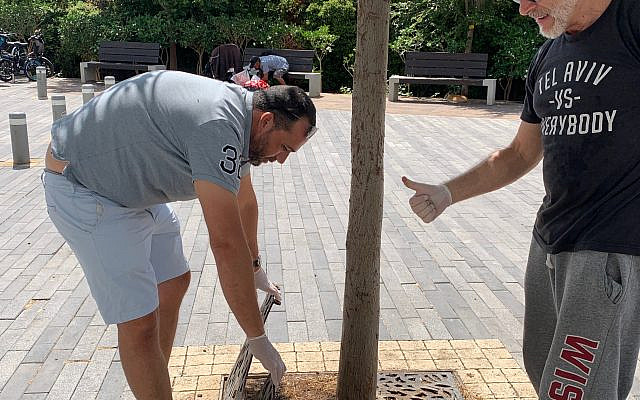 No tenants joined us for the hour’s work, during which time I hoped some of them might show up to discuss some issues face to face, but one person did make it down to the lobby. The would-be volunteer didn’t know where to find us on the plaza, but expressed interest in joining next week. That’s progress.

Back to the Knesset’s vote to confirm the 46th parliament. If the vote goes through, next comes the painstaking jobs of passing a budget; repairing the damage wrought by mobs of Israeli Arabs and Jews during the 11-day “Operation Guardian of the Walls” against Hamas; investigating the Mt. Meron catastrophe that left 45 people dead during a mass Lag B’Omer celebration; rationally debating the one-state/two-state solution options, while building on the gains achieved by the Abraham Accords.

A Knesset coalition made of parties from the left, right, and center might be the best team to fight violence against women; provide better police protection in Israel’s Arab neighborhoods, and find ways to help more ultra-orthodox Jews contribute to the good of the country.

Let the outgoing prime minister rage. The new heads of management need to focus on improving environmental protection. They need to lend a helping hand to refugees who have fled their war-ravaged lands to find a better life in a country that made the desert bloom, weeds and all.