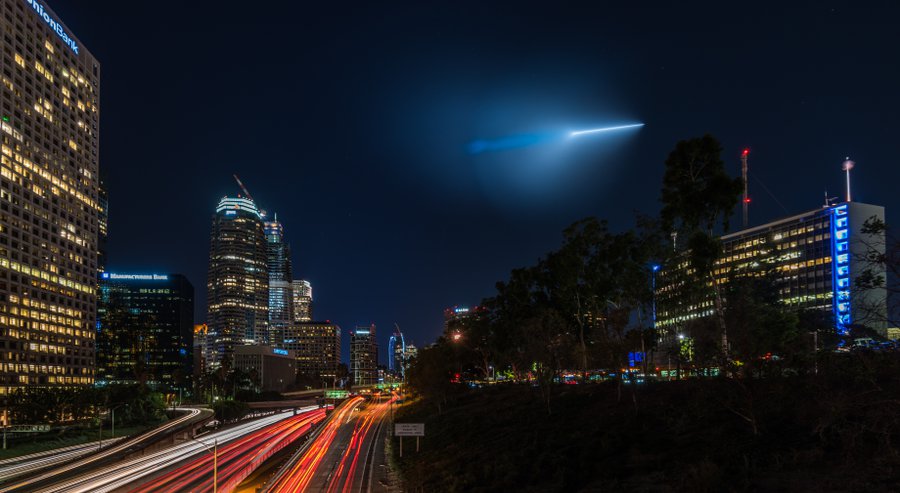 A Trident missile shown from the Fourth Street bridge over 110 Freeway in Los Angeles. Courtesy of Preston Newman Photography, www.Prestonnewman.com

It was the first of two tests that coincided with tough talk from U.S. Secretary of Defense Ashton Carter on how Russia and China threatened the world order, and days earlier he had been aboard an aircraft carrier in the South China Sea to send a robust message to China regarding the disputed region.

Addressing Reagan National Defence Forum in California that same day, Mr. Carter warned: “We do not seek a cold, let alone a hot, war with Russia. We do not seek to make Russia an enemy. But make no mistake, the United States will defend our interests, our allies, the principled international order, and the positive future it affords us all.”

The tension is heightened with the recent December declassification of US Cold War documents on a nuclear attack against Russia and China.

Just the previous day before launching the Trident missile, on November 6 NATO also concluded its largest military exercise in 13 years called “Trident Juncture”, with 36,000 troops, over 140 aircrafts, 60 ships and 7 submarines to defend against perceived Russian aggression.

Shortly thereafter on November 24, Turkey shot down Russian warplanes for violating its airspace in hot pursuit of Syrian jihadists, and got NATO to rally behind Ankara with a new air defense package against Russia.

Alarmed by US military escalation against Russia over Syria rather than focusing on fighting Al Qaeda affiliates and ISIS, U.S. Rep. Tulsi Gabbard (D-Hawaii) in the House Armed Services Committee issued a stark warning to Defense Secretary Carter that Obama’s policies could trigger a devastating nuclear war with Russia.

Gabbard said she could “only presume” that President Obama’s decision to send American fighter jets to the Turkey-Syrian border was to “target Russian planes” since ISIS does not have an air force. With US backing Turkey’s position of removing Assad and preventing the linking of Kurdish cantons Afrin and Kobane via Aleppo, she warned that US and Russia’s “diametrically opposed objectives” with air strikes in Syria could create a “strong potential” for a head-to-head military conflict escalating to a nuclear war.

Gabbard told Carter that “Russia’s installation of their anti-aircraft missile-defense system increases that possibility of — whether it’s intentional or even an accidental event — where one side may shoot down the other side’s plane.” She ended with these sobering words: “And that’s really where the potential is for this devastating nuclear war — for something that could blow up into something much larger.”

In the article the authors exhorted both Washington and Moscow are civilisations with shared interest in fighting the nihilistic ISIS, and joined US allies such as France urging a coalition of the willing that requires Moscow and Washington to overcome their “sometimes diverging interests” to forge a broader and stronger anti-ISIS coalition.

Citing cooperation in the Iran nuclear deal as a template for Syria, they urged the Obama administration to stop obsessing over the fate of one man Assad, and rebuked US blocking an UN vote on a practical Russian resolution to work with Assad in the short-term to end the Syrian conflict.

“This action is foolish, since working with Assad, at least in the short term, provides a more realistic roadmap for mitigating the conflict in Syria and rooting out ISIS.”

They further condemned US obsession with regime change of autocracies they dislike (as opposed to Wahhabi Saudi and Qatari autocracies US likes). “In the past, Washington has tried to sideline dictators like Assad, Muammar al Qaddafi in Libya, and Saddam Hussein in Iraq. We have advocated democratic norms and human rights in those countries. The results: increased chaos and destruction, rather than a shift to the norms and aspirations for a democratic revolution.”

In addition to chaos and destruction is the real risk of a devastating nuclear war between US and Russia. Recently there has been a barrage of articles from Reuters, Politico, National Interest and others warning of the increasing risk of nuclear exchanges between Moscow and Washington, especially over Syria in the aftermath of NATO member Turkey downing the Russian plane.

Given Putin sees NATO backing Turkey that he deems “accomplices of terrorists”, especially supporting Chechen jihadists in its Army of Conquest (Jaysh al Fateh), the risk increases for Turkey-Russia spat to draw in US/NATO into a nuclear exchange.

Bruce Blair, former “Minuteman” and nuclear-missile launch officer, penned an article in Politico on November 27 entitled “Could U.S.-Russia Tensions Go Nuclear?” warning of this danger. Nuclear missile launch officers are called Minuteman because hair-trigger alert system only allows a decision for launch orders within minutes—in the US it is 1 minute.

He stated that Turkey’s downing of the Russian warplane “fits a pattern of brinkmanship and inadvertence that is raising tensions and distrust between Russia and U.S.-led NATO,” and that “this escalation could morph by design or inadvertence into a nuclear threat.”

Given US and Russian nuclear warheads are still on hair-trigger alert with only a few minutes to discern whether an attack is real or a false alarm before reacting, the build up of distrust that is egged on by Erdogan’s hostility towards Putin risks miscalculations, misinterpretations, and escalation to a nuclear dimension.

Indeed on January 25, 1995, US and Russia came close to a nuclear war when Moscow believed US launched a Trident missile towards Russia.

That day Norway launched a Black Brant rocket to study the aurora borealis, but the news never reached the proper Russian authorities. Since the Brant is a large, four-stage rocket with similar flight characteristics of the Trident, Russian President Boris Yeltsin activated his “nuclear football” and retrieved launch codes for a retaliatory launch.

Fortunately after Russian early warning satellites confirmed U.S. missile fields did not show any additional launches, the Russian leaders realized it was a false alarm and called off the counterattack.

Nonetheless, what is worrisome is that this was not an isolated incident, and there have been various other nuclear close calls including one involving NATO.

In 1983 NATO conducted Operation Able Archer involving 40,000 troops similar to the recent Trident Juncture exercise with 36,000 troops, and the operation was so realistic that Kremlin, believing it was a prelude to a nuclear strike on Russian territory, gave instructions for a dozen aircrafts in East Germany and Poland to be fitted with nuclear weapons.

Soviet submarines armed with nuclear missiles were also sent under the Arctic ice to avoid detection with some 70 SS-29 missiles placed on heightened alert, and this reaction so alarmed Margaret Thatcher that she ordered her officials to “consider what could be done to remove the danger that, by miscalculating western intentions, the Soviet Union would over-react.”

Hence as Blair argued, the current danger lays in misperception and miscalculation in a state of heightened distrust between US-led NATO and Russia, fueled by NATO member Turkey’s clash with Putin over Syria’s Assad rather than cooperating in the fight against ISIS and other Islamic extremists groups.

Fortunately, the recent NATO Trident Juncture war games and launching of the Trident missile did not inadvertently escalate to a nuclear dimension. However, without taking steps to de-escalate current tensions especially between Erdogan’s Turkey and Russia, the danger remains.