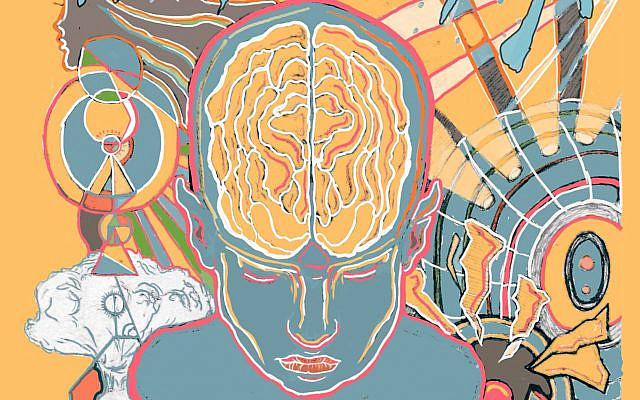 Painting by JacobYona (courtesy of the artist)

Yesterday I got on a no. 7 bus to my house in Jerusalem.  The bus was fairly packed but I managed to find one seat in the section set aside for elderly.  Across from me sat two clean-cut youth around 15 or so with no masks in sight.  I politely asked them, “could you please put on your masks?” They looked at me with such disdain and burst out into laughter, basically ignoring me.  As I feared for my health and the health of others, I asked once more, “Please, could you put on your mask?”…this only upped their laughing and snootiness.  Finally, they took their black masks out of their pockets, and put them on in a comical position.  At this point I had had enough, and went up to the bus driver and said “Are masks required on this bus?” He said, “Yes.”  I pointed to the two kids and said these two kids don’t have masks.  He said, “If so, I will need to call the police”.  At that point, the youth got nervous and put them on, though one of them continued to “protest” and did not cover his nose.  I looked straight into his eyes and said, “Are you above the law?” He looked at me with a stupid grin and then he and his crony burst out into laughter and began to mock me.  Their laughter, mockery and taunting continued for the entire trip (20 minutes or so), until they got off the bus.

I soon got off the bus, boiling up inside.  I thought to myself, “If this is a sign of the times, we are in deep trouble.”  I walked further on thinking, “A society which does not respect it’s elderly is doomed”.  My wife later heard me ranting and said, “You can’t blame an entire society for the acts of two teenagers. You can’t generalize.”  Of course she was basically correct, but the incident of being taunted and mocked had lingered in my psyche for the rest of the day.

I thought to myself, “These two guys were clean cut, obviously from “good” families (whatever that means), obviously intelligent (whatever that means), clean cut and clean stylish clothes. To boot, one was sporting a small kipah.  There was something “wrong” with this picture.  These were not two hoodlums but two of our clean-cut cream of the crop.  From where did their values emanate? Where were they incubated?  In the back of mind I kept asking myself, “Who educated them?”

It is now 5:30 am. The day light is emerging.  There are a few birds squawking.  I wish they were singing.  I feel uneasy, not wanting to do anything.

I could continue philosophizing, but yesterday’s “incident” has seemed to have left it’s mark.  I feel exhausted, weighted, trembling slightly.  I could not sleep.  The two taunting faces, their smirks, their brash laughter, their disdain and frankly lack of respect left an vacuous feeling in my belly, and a deep deep sadness.  For me this event was a “litmus test”, that tiny paper which reveals the identity of test tube contents, a tiny point in time that erodes, a seemingly insignificant smear which still stings.  It is etched into my consciousness and keeps haunting me.

Yes, we are in trouble.  For if this is the new norm, the new speak, the new values… when an elderly man (though I am young at heart) can be taunted for twenty minutes, when health precautions can clearly be ignored, there is something strange brewing.

Come to mention it…at one point on the bus I also noted at least seven passengers without masks or half-on, chin masks, or nose-free masks.  Are they also above the law?

Next time I will walk.  Anyways, I could use the exercise.