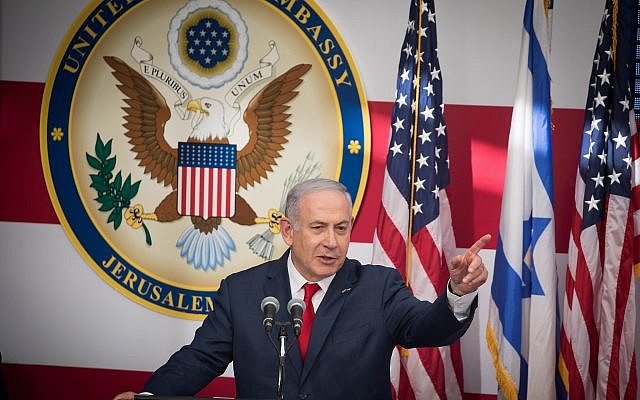 Then-prime minister Benjamin Netanyahu speaks at the official opening ceremony of the US embassy in Jerusalem, on May 14, 2018. (Yonatan Sindel/Flash90)

At a Washington news conference attended by Yair Lapid, US Secretary of State Antony Blinken announced that the Biden administration intends to “press ahead” with a plan to open a consulate in Jerusalem designed to “deepen ties with Palestinians.” Mr. Lapid apparently voiced no protest, and the State Department’s spokesperson resolved any doubt in a later briefing. When asked whether the US plan was to open a consulate somewhere “other than Jerusalem,” the spokesperson replied, “The secretary made this clear in May when he spoke to it in Jerusalem; he made it very clear when he spoke to it and Ramallah — we will be moving forward with the process to reopen our consulate in Jerusalem.”

Blinken’s plan sounds relatively innocuous to those who want a two-state solution. But it really is a giant step backward in America’s policy on Jerusalem. If Israel accepts a consulate for Palestinians in Jerusalem, Israel’s foes in the State Department will be empowered to again treat Jerusalem as a city that is not in Israel.

Harry Truman may have recognized the State of Israel 11 minutes after its creation, but America’s diplomats refused for 70 years to recognize that the city of Jerusalem was in Israel. We encountered that stonewall for the 18 years that we litigated pro bono to reverse the Passport Office’s practice that treated American citizens born in Jerusalem as if they were stateless — as if they came into the world outside the borders of any recognized country.

Our baby client was Menachem Binyomin Zivotofsky, born in Jerusalem’s Shaare Zedek Medical Center to American-born parents. The birth certificate authorized by the State Department for Menachem left blank the space for his country of birth. US passports routinely designate the country of birth for American citizens born abroad, but the State Department’s Foreign Affairs Manual forbade designating “Israel” for anyone born in Jerusalem. When Menachem’s parents asked that their newborn be issued a passport, they were told that his US passport could identify no country of birth, but could only say “Jerusalem,” as if it were a city outside the border of any country. We sued for Menachem, enforcing a law that Congress had enacted directing that Jerusalem-born US citizens could opt to designate “Israel” as their place of birth.

The State Department was not applying an even-handed policy. Anyone born in Israel before 1948 could choose to list “Palestine” as their place of birth, as if the Jewish state had never come into being. Those born in Tel Aviv or Haifa after 1948 did not have to carry passports identifying them as born in Israel. If they were unhappy to see “Israel” as their place of birth — as some Arabs might be — they could choose to substitute the city in which they were born. The only American citizens denied a wide choice were those born in Jerusalem.

Congress had overwhelmingly approved Israel’s jurisdiction over Jerusalem in a 1995 law directing that the US embassy be moved to Jerusalem. Yet Presidents Clinton, Bush, and Obama — pressed by the State Department’s Arabists — overrode Congress’ directive by issuing baseless “findings” that invoked overriding foreign-policy justifications to delay the move. Fear that moving the embassy would spark violence in the Middle East was the specious justification.

No matter how unrealistic it was to deny that Jerusalem was in Israel, the policy persisted. When President Obama spoke at Shimon Peres’ funeral on Mt. Herzl — located in an area of Jerusalem that Israel had controlled ever since the state was established — the White House unashamedly corrected the tagline issued with his address to read only “Jerusalem,” rather than the initially issued “Jerusalem, Israel.”

Six justices of the Supreme Court ended our marathon courtroom battle by deciding that Congress had no constitutional authority to recognize foreign governments. The president, they said, had sole and exclusive power to accord legal recognition to foreign sovereigns and determine their boundaries, including the location of cities. The Court’s opinion exhibited the justices’ fear that recognizing Jerusalem as being in Israel would set off bloody warfare.

Then-president Donald Trump announced in May 2018 that the US embassy would be relocated from Tel Aviv to Jerusalem, and this turned what had appeared to be a legal defeat into a triumph. Contrary to the foreign-policy gurus’ predictions, the reaction was mild. The Supreme Court decision in Menachem’s case doomed any legal challenge to the president’s recognition of Jerusalem as being in Israel. Other Trump decisions were taken to court by his opponents; this was a rare unilateral executive action that no one contested.

The proclamation that opened the Jerusalem embassy declared that the relocation was “grounded in principled realism” and “acknowledgment of plain facts.” These “plain facts” compelled the State Department’s Passport Office, pressed by then-secretary of state Pompeo, to revise the department’s Foreign Affairs Manual finally to authorize recognition that Jerusalem is in Israel by permitting Menachem and all US citizens born in Jerusalem to carry passports listing “Israel” as their country of birth.

Since 1844, when the area was under Ottoman rule, the US maintained a consulate in Jerusalem. The relocation of the embassy made this consulate superfluous. Under then-US ambassador David Friedman, the building on David Flusser Street in the Talpiot neighborhood of Jerusalem that had housed the US consulate was converted into the US embassy. Consular services continued at that location and are available there today. The embassy’s annex on Agron Street, where the American diplomats who conduct the Palestinian Affairs Unit have their offices, was brought under direct control of the embassy, thereby achieving compliance with the Jerusalem Embassy Act of 1995.

There is no practical reason for the US to open a new consulate-general anywhere in Jerusalem. If Secretary of State Blinken wants to “deepen ties with Palestinians” by providing more accessible consular services, he can do so by opening a US consulate in Ramallah, near the government headquarters of the Palestinian Authority.

Many oppose a US consulate in Jerusalem because, they say, it “divides Jerusalem.” It does more damage than mere division. If the Biden administration converts the Agron Street property or any location in Jerusalem into a new consulate-general that serves as a de facto “Embassy to Palestine,” complete with a consul-general who reports not to the US ambassador, but directly to the State Department, America will be resurrecting an unprincipled dangerous fabrication that it finally buried three years ago. And if Prime Minister Bennett allows America to take this step, he will go down in history as the Israeli leader who gave away Jerusalem.

The above was co-authored by Nathan Lewin and Alyza D. Lewin, who are Washington, DC, attorneys who litigated the Zivotofsky case pro bono for 18 years (with two argument sessions in the Supreme Court) so that Jerusalem-born American citizens could identify “Israel” as their place of birth on US passports. They are law partners at Lewin & Lewin, LLP, and Alyza is also president of the Louis D. Brandeis Center for Human Rights Under Law.