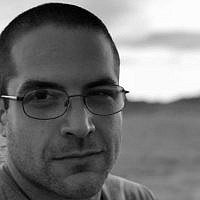 The Blogs
Ian Pokres
Apply for a Blog
Advertisement
Please note that the posts on The Blogs are contributed by third parties. The opinions, facts and any media content in them are presented solely by the authors, and neither The Times of Israel nor its partners assume any responsibility for them. Please contact us in case of abuse. In case of abuse,
Report this post.

It was not until after college that I felt my mouth dry up, and my spirit deflate in rage when an antisemite said something insane to my face. But first let’s cover childhood. I don’t have Twitter. So here is my #jewishprivilege in many more characters:


To be sure, I had had many antisemitic encounters growing up – my friends laughing at my Hebrew name, your standard, un-funny “O you’re a Jew, let me get some money” jokes (HA! Original). One time a guy in my “gifted-and-talented” class was making fun of me for going to Hebrew school on Sundays. It was all in good fun…a bit one-sided of course and altogether uncalled for, but we were friends. So when I jibed back about (Catholic) Sunday School, suddenly the teacher grew ears. “Ian, I’m surprised at you…what are you saying???” I cursed her out and walked out of the room. Seriously. That was sixth grade. Luckily, the bell rang not ten seconds later; she was calling after me, but I just kept walking. I didn’t need a hall pass anymore.

While these last episodes obviously bothered me (and sometimes still do), none of these “micro-aggressions” ever really hit home. I didn’t exactly know what being a Jew meant. My stunted Sunday-only Reform education did not grant me that privilege, and at home, Hanukkah was the only Jewish offering on tap. And that was OK. Two thousand years of colonialism and oppression can have that effect on a people.

But in college at Rutgers University, I met a young kiruv (outreach) Rabbi in the first week’s “activity fair” and he said to me: “College is a time for parties, and we do Jewish parties.” Well, I went to Atlantic City High School, and that meant I knew how to party. My attachment to traditional Judaism grew from there. By the end of second year, I was in tzitzit and kippah. But I still liked to party. עשן (smoke) does equal 420 after all…

So one day I went to one of my frat brother’s apartments to smoke a bit (after I had finished studying…I am still a nice Jewish boy after all), and we were in his room enjoying the “pleasing aroma” when we heard the front door open. My friend honestly looked concerned. He looked at me and said, “Ian, I should have warned you, my roommate is a little crazy, and he’s probably gonna say some crazy s*** to you, I’m really sorry ahead of time.” I thought, “O God, here we go.” But I really didn’t expect what followed.

This guy spent the next hour (I’m not kidding) berating me with things like “Zionists did 9-11” (he had a book to prove it on his nightstand…again, not kidding), “the Jews control the media, government, finance, etc.” I calmly listened. I was so tickled to be experiencing this in person (I had only read about such people) that there was a smile on my face (you know, God playing with the Leviathan, the Divine Comedy, or something like that). I was sure that the smile angered him even more, which just made the whole thing even more farcical. In the end, I didn’t even spend the rest of the night with my friend, but instead turned into this nutjob’s makeshift psychologist for a few hours. I couldn’t help but feel the Freud. In the end, he just needed a Jew to listen him. I don’t know why. He had daddy-issues or something. And he didn’t even take a puff. Very uncool…

Anyway, that sticks in my head as my first encounter with full-blooded antisemitism. I do believe your run-of-the-mill micro-aggressions (like those mentioned above) are antisemitic, but for the most part I think a lot of people are just a**holes. Stuff like “Jews are cheap,” “Jews have big noses” are rooted in centuries-old European tradition, but I think the average American who says such things is too uneducated to know where their ideas come from. They just think they’re being cute. But perhaps, of course, it’s possible I’m judging too favorably.

A friend of mine once told me he was taught by a local Catholic high school teacher (in class) that Jews get buried vertically to save money on burial plots. When I told the same kiruv Rabbi I mentioned above about this – just to be sure it wasn’t true…what do I know? – he laughed and said, “no, but it’s a good idea.” Jewish humor at its finest. Anyway, just so I don’t tailspin out with debilitating fear, I often tell myself most Americans aren’t indoctrinated with a systemic antisemitic ideology like my frat brother’s crazy roommate. But I’ll tell you, I come from a non-Jewish area, and waaaay more people than I’m comfortable admitting have made casual antisemitic remarks at or in front of me. It’s all very genteel. It’s so commonplace that Jews do it too.

So OK, that guy wasn’t the first tried-and-true antisemite I met then, I take it back. In high school, someone I had just met called me a kike. He was also a rower on his school’s crew team, and I knew his brother. I guess this gave us the comradery he thought necessary to call me a name I didn’t even know existed at the time, and only now gives me indigestion to think about. I said, “huh?” And he looked confused, even regretful, and said, “O you don’t know? Forget I said anything.” But he said it as a joke, so it wasn’t ideological, right?

OK, fine, I admit it, it is all 100% systemic and ideological, the average American just doesn’t realize how (just like the vast majority of Trump supporters won’t acknowledge their hero’s implicit nor his explicit racism). I do now though, and that started when I put on a yarmulke and was blamed for 9-11. But it’s not necessary to go to such extremes. Everyday when I went outside, I could feel the stares. Sometimes you just feel like a circus freak.

So, I like to walk a lot. Once I was on the opposite side of a street from a university bus stop and I peeked up from my budding shmirat ainayim (guarding the eyes) practice to see a group of twenty students looking at me unusually. That’s how it felt anyway. Enough of them were to make it stick out in my mind. And even if it was only a few, year after year of subconscious acceptance of antisemitic microagressions made me feel as if I was under a spotlight. Come to think of it, maybe my anxiety started during that period.

One Friday night I was oneg-hopping with a group of students and two White wannabe street-toughs were leaned on their car, greaser-like, and one of them said, “What is this, a running joke?” It stopped me in my tracks. I’m not a fighter, but one of the girls had to pull me away so I didn’t do something stupid. I’ll never forget. She said, “it’s not worth it.”

One last memory from a Shabbos stroll: I was back from school in my hometown taking the mile walk to our Chabad. Two little tween punks with skateboards in their hands were rolling pennies at me from behind. I didn’t even look. “Chazal said let it go, Chazal said let it go,” I kept thinking. Plus, I didn’t want to go to jail for bashing children’s heads together like Moe.

But the rage was building, and I hadn’t yet found my outlet. Nor had I met any Islamists or Leftists. All in good time…

But just to make things crystal clear in the meantime, #JewishPrivilege is named sarcastically. A privileged, white male need not be made to feel terrible about their ancestry. They need not abandon their religion to fit into society. If that is my privilege, you are welcome to it. And I know what I am saying is a simplification (o well). Jews can be white passing, their “conditional whiteness” being conditioned on abandoning Judaism. And yet even in that situation, a Jew only passes, waiting for the next Holocaust, a possibility being planned daily whether we want to admit it or not. So…as the great Jew-led band NOFX once put it…Don’t call me white!