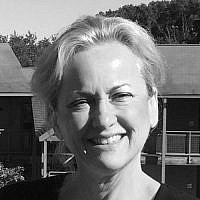 The Blogs
Ayala Weinberg
related passages
Apply for a Blog
Please note that the posts on The Blogs are contributed by third parties. The opinions, facts and any media content in them are presented solely by the authors, and neither The Times of Israel nor its partners assume any responsibility for them. Please contact us in case of abuse. In case of abuse,
Report this post.

“ Walk through the vineyard “

I belong to many wine groups  and lately have been in some live sessions with vintners.

“ To build a vineyard is not like any business,” he said, “it is something that one builds for generations.”

His family’s story was so interesting and all five members of the family had something unique to bring to the table and they were a powerful strong family team. Their wines were unique and had won many awards.

Where did your journey into the vineyard begin?

I think mine may go back to my childhood .  We would go out of state  about twice a year  to my mother’s relatives’ store to buy wine  for a major holiday .

She came from a longstanding wine family that is based in Santa Barbara , California but had major distribution on the east coast.

Back then Wine was not as fully developed into a cultural experience as it is today.

Later on I discovered  Italy, Napa and Sonoma in Northern California , and that really developed my awareness of the viticulture. Napa felt like Italy in the USA.

Then came a very significant  Mediterranean country that is where much of my roots are embedded. Israel.

There were some discoveries more locally in my region  as well!

Since then I have learned and continue to explore  the many different aspects of viticulture.  And I  am curious as to how it varies in different parts of the world.

There are some great films to see how complex it is to become a sommelier :

Sommelier, Uncorked,  Vintage, just  to name  a few  films where one can see just what it takes to become an expert on wine. These films  also give you an understanding as to how much goes into the wine industry.

There are larger wineries, there are boutique wineries,  and small estate wineries. There are different types of climates and soil thus creating different  acidity, varietals,  and yields.

I remember my father telling me that his grandfather lived  well close to 90 which was no easy feat in the 1920’s and that he drank a small “ glazele”  ( glass) of wine every evening !

About 1.5 years ago I ran into a sweet lady whom I had known for a very long time. She and her husband were very close with my parents. We  had both lost our fathers, and somehow this story came out.

She decided to tell me about the first time they got together and that my father kept asking her about her roots, she did not know why he persisted so much, but finally she told him about where her parents and grandparents came from.. It turned out that my father knew her mother and her mother’s parents quite well as they owned a winery in a  Slovakian winery region outside of Bratislava in Tjorn outside the lower Carpathian mountains.

At that time  my father, who was studying in Bratislava then known as Pressburg, was trying to make some spending money and worked for them.

And he became very friendly with them and joined them for meals and yes they adored my very renaissance ,  scholarly,  and witty dad.

I never knew this, I called up my sister  right away and she said yes it’s true!

So perhaps wine culture goes back so much further

It is a culture of food and bounty, and  wonderful gatherings.

It is biblical, ancient and modern.

There is the biblical quote:

“ Call each other under vine and under fig “

The vineyard is a symbol of hope

And a symbol of the past and a vision of the future.

So when we walk through a vineyard we experience  all of these  things.

And start with some bubbly !

Shana Tova to all

She was robbed of so much in the last five years of her life, yet she  enjoyed a nice glass of wine.

The above is an excerpt from my cooking site.

About the Author
I was an interior designer for 25 years and had a parallel path in leadership in the Baltimore Jewish community. I spent a fair number of years as a proud lay leader in an amazing outreach organization called Shoresh . I am involved in leadership and development ,mentoring ,and coaching.., non profit development and consulting and program development I am dedicated to the Jewish community both in North America and in Israel ,and am involved in all things Israel, primarily from an educational perspective. I have a passion for writing and blogging, and have a cooking site called : The Spirited Cuisine I developed, run, and coordinate a program - both supported by the CJE,, Macks Center of Education as part of the Associated Baltimore Jewish Federation, and supported by the IAC , Israel America Center. It is called C~3/ Erev Yisraeli . Coffee .Cooking.Conversation. Connecting Israelis and Americans within the community for experiential gatherings to journey through Israel via food, wine, conversation, poetry, and more. At the end of the day, my roots in Israel are very deep. It is the place, the hub the center,The conversation.- our home. And I most enjoy inspiring and cultivating that love and connection in others .
Related Topics
Related Posts
Comments