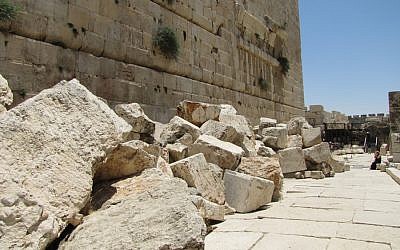 In all my time being a journalist and blogger, little seems to happen by coincidence. Or maybe it was a simple coincidence. A boulder falling on the egalitarian prayer area is news enough. Does it have to fall near Tisha Beav? Is it all a simple coincidence?
This last Tisha Beav was one of the most divisive in memory. Protesters representing the LGBT movement across Israel obstructed traffic and then marched on Rabin Square demanding surrogacy rights for male LGBT partnerships. Last week the leader of the Conservative movement in Israel, Rabbi Hayun, was arrested at 530am by the police for the crime of officiating at Jewish weddings outside of the Official Orthodox Rabbinate of the country. The news of his arrest created a tidal wave of hateful exchanges both in Israel and around the world. Virtually all the major American Jewish organizations defended Hayun, as did many within Israel itself. However, on the other side the Rabbinate admitted they did have authority to investigate him. Only earlier this month, Shas MK Yinon Azoulay blamed Reform Judaism for the earthquakes that shook Tiberias and accused them of not being Jewish. He is not the only one. Last month a United Torah Judaism MK accused all non Orthodox as “stabbing the Torah in the back” and not being “real” Jews in the Halachic sense. In fact, every month another ultra religious MK blasphemes millions of Jews around the world. On the secular side things are not any better with many secular Jews calling the army exempted Torah studying yeshiva students a burden to society or worse.
How did Tisha Beav start? The spies returned from their fateful mission to survey the land. Ten of the twelve of them reported horrible things that awaited the nation on the other side. They were divided from the two spies, Caleb and Joshua, who did present a positive report. The nation began to weep bitterly, but a weeping for no reason. The lack of unity, both physically and spiritually in G-ds plan, led to the forty years of wondering in the desert with only the positive spies surviving. Throughout the ages the day has become synonymous with the destruction of the Jewish Temples that have stood on Mount Moriah, destroyed out of baseless hatred (sinat chinam), division, and slander. G-d left us Jeremiahs account for the destruction of the first, and Josephus’s account for the destruction of the second.
So is it a coincidence that a boulder fell from the Western Wall on Tisha Beav? For the last year most of the Jewish world has been fighting a pitched battle over prayer rights and we failed to show a united front. The Reform wanted a pluralistic prayer space and groups such as Women of the Wall go in there in force to illustrate female religious emancipation. On the other side there is the Orthodox establishment that at any cost would not allow a compromise forcing everyone to follow their strict interpretation of the Halacha, an approach that alienates many especially outside of Israel. Jew started hating Jew, religious denomination started hating religious denomination and suddenly a boulder threatens to shut down the cherished religious site for a prolonged period.
The solution to sinat chinam is ahavat chinam or universal or senseless love. Instead of the focus of how we are different why not focus on how we are all the same and how we all cherish our relationship with the divine? As the Talmud teaches us that during the time of the Second Temple there were many pious Jews in observance but they harbored a hatred from within (Yoma 9b). When the State of Israel was founded it was created with the overwhelming unity of Jewry around the world. Same was true during the Six Day War. However, since, division has crept up within us. Today, the most vile groups against the State of Israel are Jews and hatred is seeping into conflicts between denominations.
Note the boulder did not fall on the day we observe Tisha Beav itself, but on the next day. Time to stop hating each other and to focus on the strength of being a united nation. Only through unity will we ever hope to reach true prosperity and Geula.
About the Author
Born in Israel but raised in Canada, Gil Lewinsky worked as a journalist in Jewish newspapers including the Jerusalem Post after completing a Masters degree at the Munk School of Global Affairs from the University of Toronto. He also has a LLM in International Law from Lancaster University in the UK. His past topics include a book written about the Status of Gaza under International Law soon after its conquest by Hamas in 2007. He is perhaps best known as one of two people that brought a flock of Jacob Sheep from Canada to Israel in 2016, making history. He currently works as a teacher and English public relations professional in Israel.
Comments