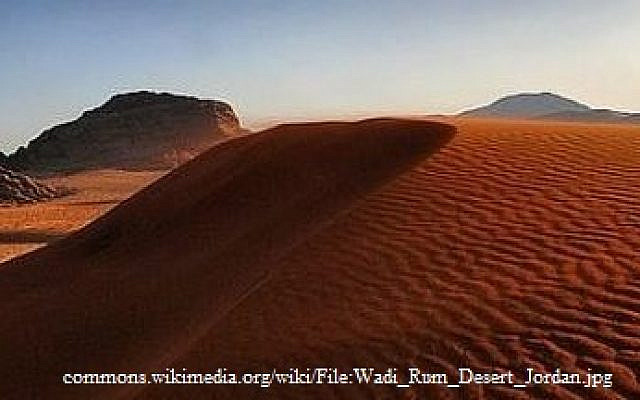 Wadi Rum Desert, Jordan, Courtesy: Anark 75 (Wikimedia Commons) Over the last half century the aquifer under the Jordanian desert has dropped tens of meters.

The second most abundant compound in the universe is H2O, water. Carbon monoxide takes first place, with CO2 coming in third. It should therefore seem extremely difficult to use a “water crisis” or “carbon pollution” as the means for novel imposts and governmental restrictions. The will to levy a tax and establish further controls over ever more people does seem up to the task though.

Even posing the question of whether water is becoming scarcer across the world is in itself an upside-down query. The amount of water on the planet doesn’t and can’t change; there’s no place for it to go. Populations do increase, however, so there’s really no great mystery here.

Potable water comes from two places: freshwater lakes and rivers, and underground aquifers. Insofar as the first is concerned, for as long as measurements have been made of the Great Lakes, for example (a massive volume of 21% of the world’s fresh water), the diminution, if any, in water level is so slight as to render it meriting no further mention. And, rivers that have flowed since before the memory of mankind are still running as strongly as ever,  the Mississippi alone discharging 16½ million liters of fresh water every second into the Gulf of Mexico.

Yet the lowering of water tables of some of the world’s aquifers is a fact, and one whose obviousness has been apparent owing to booming populations worldwide. A third of a billion Americans, for instance, can’t have taken up residence above the High Plains aquifer system, draining that liquid resource having accumulated over millions of years, and imagine that the water table should magically remain unchanged.

Nonetheless, there’s no solution possessed by any sloganeering politico to cheat the first law of thermodynamics: matter can’t be created nor destroyed, and that goes for water too. But there is, looking decades, centuries and millennia into the future, only one real answer to humanity’s future water woes—and that involves tapping the inexhaustible source of Earth’s oceans.

Desalination of seawater is currently well-established across the planet with some 18,000 plants in service. Recent breakthroughs in reverse osmosis membrane technology (pushing water through while preventing salt from passing) have garnered a 30%-40% increase in efficiency; the industry is poised to take off. Israel today provides copious amounts of water to its citizenry in a desert land plagued with water problems since the Copper Age—60% of it pulled from the sea—and with plans to increase that amount to 70% in the coming years.

One hundred and twenty countries operate desalination plants. There are places in the world—Saudi Arabia, the Canary Islands, Singapore, etc.—where there is simply no other alternative. It’s the clear option; with 1.4 billion cubic kilometers of it in the world’s oceans, water is in superabundance on our sloshing liquid planet.

The great paradox in this involves just who the voices are in opposition to slaking humanity’s thirst; it’s the very same alarmists making “crisis” catchphrases out of water shortages. Self-styled progressive activism has set its sights against desalination projects across the globe, using the same circular arguments often employed in pure and simple naysaying.

Among those who promote electricity over fossil fuels the opposition to reverse osmosis plants is incongruously because they use—electricity. And in a caricature of environmentalism which should seek to legitimately protect threatened wildlife, the focus now has supposedly devolved onto potential harm done to microscopic organisms, more than a billion of which live in every liter of the 1.4 sextillion liters of seawater.

Their protests in recent months have ranged from as far afield as the US West Coast, to the Texas Gulf Coast, to the Sea of Galilee.  Ultimately, even among those whose inclination is to say no to gasoline, coal, fracking, dams, meat, automobiles, nuclear power, air conditioning, plastic straws and every other modern facet of a sophisticated 21st century society, turning thumbs down on water may hopefully be a step too far.