The Blogs
Chavi Feldman
Apply for a Blog
Please note that the posts on The Blogs are contributed by third parties. The opinions, facts and any media content in them are presented solely by the authors, and neither The Times of Israel nor its partners assume any responsibility for them. Please contact us in case of abuse. In case of abuse,
Report this post.

I’m not a big jewelry person.  Don’t get me wrong, I do love pretty sparkling things dangling from my ears and adorning my fingers, but I tend to wear the same thing about 364 days a year and maybe remember to switch them for something else once a year.  But the one piece of jewelry I never really got into is a bracelet or watch.  As a pianist and piano teacher, I never liked the way the extra weight felt on my wrist or the way it moved up and down my arm as I was playing.  But a few years ago, I had a bracelet made and I knew the second I fastened it to my wrist that I was never going to take it off.

My great grandmother, Chava Rochel Gutt, the woman I am named after, took all her jewelry and silver Judaica she had in her small humble home in Strzemieszyce and buried them all in her backyard as the Nazis were systematically making their way through Poland in order to round up all the Jews. She buried them with the hope that when this nightmare was over, she’d be able to go back and dig up all the priceless sentimental items that she had collected over the years and begin to live again. Candlesticks that she lit every Shabbat, wine goblets her husband used for making the Kiddush over the wine, a menorah that was lit in the window of their house every Chanukah, and jewelry her husband had given her over the years.  Unfortunately, she and her husband and seven of her nine children, and her daughters-in-law and sons-in-law, and eight grandchildren did not survive the Holocaust.

My grandfather and his oldest brother were the only ones to survive and as my grandfather was making his way towards the Displaced Persons Camp of Bergen Belsen, he went back to his small house in Strzemieszyce to dig up the items his mother had buried in the backyard.  As he tried to enter what was once his family’s property, the Polish owners of his house threatened to kill him.  This was not uncommon.  In fact, when he first entered the small village, he said people in the streets started pointing to him and screaming, “The Jews are back!”  The local Poles had simply moved into all the Jewish homes that had been vacated and they were suddenly afraid that they would have to give back the property they had stolen.  He sought out the help of a local policeman and tried to explain that he wasn’t interested in the house, but that his family had items in the backyard that he wanted to collect.  They were his only connections to the huge family he’d lost in the war, he explained.  The policeman agreed and they returned to collect his belongings.  After my grandfather successfully dug up the gold and silver, the policeman proceeded to take every priceless treasure his mother had buried and in the end left him with just three long gold chains.  Devastated that he was robbed by someone he thought he could trust, he took the gold chains and began to think about starting his life over from scratch.

He found my grandmother, the woman he was in love with before the war, and together they made their way to Bergen Belsen where they married and began to start a family.  My mother was one of the 2000 babies born in Bergen Belsen DP Camp after the war.

After my grandfather died, my mother gave me one of the chains.  For a long time it sat in my drawer in a small jewelry box and I wore it once in a while but it was long and constantly got tangled and knotted.  I wasn’t sure what I wanted to do with it.  My idea took a long time to formulate, but eventually I knew what I wanted to do with it.  I commissioned a jeweler to craft me three small teardrop shaped discs and onto them he etched my name in Hebrew.  Not just my name, but my family tree where I came from, where my roots lie.

And connecting these small discs are pieces of the chain that was buried deep beneath the ground, in the backyard of my grandfather’s family home in Strzemieszyce, Poland, where it lay safe from Nazi hands until it made its way back to its rightful owner.  I look at my bracelet often.  I get asked about it a lot; curious people who notice the etchings inquire about their meaning.  And I tell them to take a seat, that this story may take a while.  And in the telling of this story, I honor the spirits of those who were murdered in the Shoah.  It puts a face onto the broad number of “six million”; gives one of these “six million” a name.  And it paints a picture of the thoughts and wishes and fears of a mother, wife and grandmother who was unfortunate enough to live during this awful time.

Despite how delicate and lightweight it is, it does shift up and down my wrist and I feel the weight of it while I play.  But this is a weight that I welcome.  It’s a reminder of a woman whose name I share with pride, a woman who had hope while living in the shadow of evil. 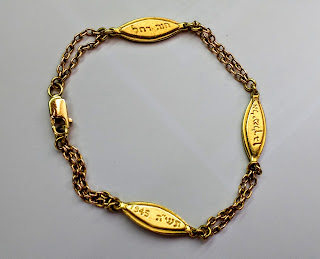 About the Author
Chavi Feldman has a degree in graphic design and advertising and works primarily as a music teacher. She has lived in Israel for more than two decades.
Comments