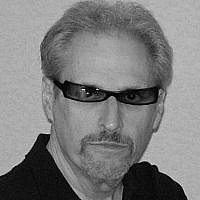 The Blogs
Chip Blumberg
Apply for a Blog
Advertisement
Please note that the posts on The Blogs are contributed by third parties. The opinions, facts and any media content in them are presented solely by the authors, and neither The Times of Israel nor its partners assume any responsibility for them. Please contact us in case of abuse. In case of abuse,
Report this post.

For this week’s column I have the distinct pleasure to be able to share with you, my readers, a brilliant and hard hitting narrative verse written by my dear friend, Henshi Gorodetsky. The link to her personal blog is: http://askachasid.blogspot.com/

A World Without Israel:

How great that would be,
Radical Islam from sea to sea,
No more free choice or diversity,
Just caliphates, sharia and no equality,


No Jews in the Mid-East, Africa nor Asia,
Nor Europe, nor Disney’s Arabic “Fantasia”,
No gays and no trannies, no Christians, no Sikhs,
Just wall to wall burkahs and suicidal freaks,

Innocent children are raised only to “hate”,
Seems to be the agenda of this caliphate,
“Free Gaza” from Israel, they righteously scream,
While killing each other, the terrorist’s dream,

Only honor in death, no sanctity of life,
“L’chayim” will be gone, like Donald Trump’s second ex-wife,
A world without Israel, if you can foresee,
Would be a world where terror would indeed run free,

For without us “Jews” in the Middle East,
The bloodshed will spread easier, an infective beast,
To Europe, to Asia, Africa et al,
And to the US, and your local mall,

A world without Israel, if that’s what you see,
Get rid of your phone and all technology,
For in this small country more knowledge we did glean,
Than ALL the other countries in the region as can be seen,

“Go home dirty Zionists” – where should they go,
To Paris, to Sweden, Barcelona, Morocco,
Why not just look at this trend on twitter,
#hitlerwasright#Freegaza from its babysitter,

All you hipsters, new-agers and cool mediaites,
Would not last five minutes without your basic human rights,
Just call it as it is, Racism and Hate,
Moderate Muslims sit silent and berate
our beautiful, compassionate proud Jewish State,

We Rose Out of the Ashes and We Will NOT Be Erased!!!

Like America, Israel is far from perfect, but we both want PEACE. It is time for true lovers of peace to unite and call it what it is.
Get rid of HAMAS and Radical Islam…the elephant in the room. There are innocents on all sides in all countries, but STOP blaming the Jews for the world’s problems. #FREERACISM

About the Author
Chip Blumberg is a freelance writer and poet. He is currently working on a historically accurate fictional novella set in America during the 30s, with a decidedly Jewish list of main characters and with Jewish culture woven throughout. He is a former AM radio talk show host and long-time dealer in paper antiquities. His background is in business and professional sports management. Chip is a CPA and lives near Philadelphia, Pennsylvania with his pup.
Comments