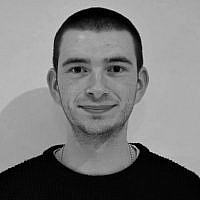 The Blogs
Josh Holt
Apply for a Blog
Please note that the posts on The Blogs are contributed by third parties. The opinions, facts and any media content in them are presented solely by the authors, and neither The Times of Israel nor its partners assume any responsibility for them. Please contact us in case of abuse. In case of abuse,
Report this post.

Having spent the 10 days participating in the European Union of Jewish Students’ delegation to Brussels and Washington DC for the AJC‘s Global Forum, alongside 37 young Jewish leaders from across the continent, I became only too aware of the vastly different experiences of the Jewish people from country to country. However, despite these differences, the prevalence of the Jewish values that unite us was only too apparent.

During the programme, we learnt of the callous attack that had struck in London, not more than a fortnight after the terrible events in Manchester. The solidarity that was offered to the British delegation is symbolic of the strength of global Jewish values that unite us, and this was epitomised in the memorial service that was organised by UJS, the Board of Deputies and the AJC. At the initiative of the French delegation, representatives from the global Jewish community stood shoulder to shoulder with the UK, at the same time as Londoners were standing together outside Potters Field Park.

The symbolism of this solidarity needs no explanation, but the expression of our humanity and the power of our shared Jewish and global identity really struck me. I was honoured to be a part of this collective show of unity from communities around the word, in support of my city and my country.

From the ashes of this terrible ordeal came a beautiful display of compassion that knows no bounds. For that I am grateful.